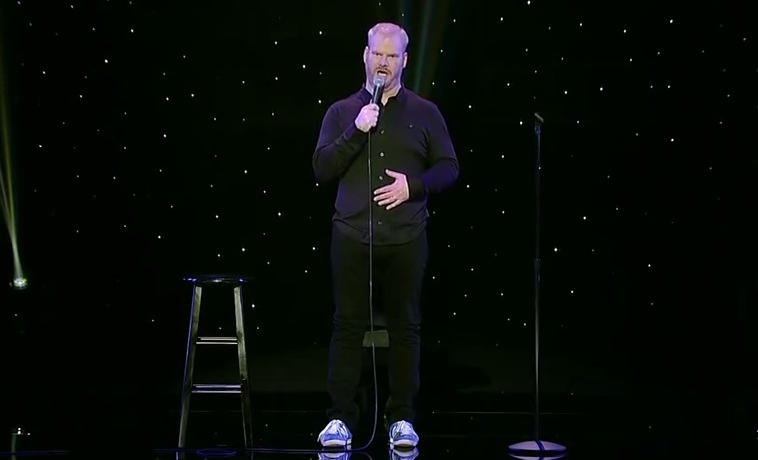 Forty-six-year-old Jim Gaffigan is one of the most sought-after touring comedians in the United States. He appeals to a wide audience, as he identifies with the average American (most of his acts are about raising a family, or food). In an interview with CBS, Gaffigan opened up about his day-to-day life living in a two-bedroom apartment in Manhattan’s Lower East Side, where he and his wife are raising five small children. The comedian doesn’t mince words when it comes to the realities of parenting:

There’s something very un-sexy about parenting. I mean let’s be serious. First of all, it’s like, your parents did it.

In his token candid way, Gaffigan chronicles life as a father of five:

There’s no equation where parenting makes sense. It’s like all right, there’s no sleep, the pay’s horrible, yet people… like it?

“You’re a successful comedian now. Why are you doing this to yourself?” asks the interviewer.

Well I’m not trying to prove something! I’ll book events and people will be like, ‘Why are you in that apartment? This is not the 1800s you know!’

Discussing how he came into comedy, and how being a parent jives with being a comedian:

First of all, we [comedians] are not normal. It’s a solitary, introspective pursuit. The characteristics of a comedian are the exact opposite of the characteristics you would want in someone to be a father or a parent.

When asked how he ended up with five kids despite his apparently unsuited personality, Jim retorts:

I married a woman who gets pregnant looking at babies.

Gaffigan explains that growing up, he was the youngest of six kids. All of his siblings were terrified of his dad. He would do comedy for his siblings so that they would see him as a funny brother, and not just an annoying kid or competition for food. Gaffigan graduated from Georgetown in 1988, where he majored in finance:

My father was the first one to go to college in his family, and I was raised to seek security, and security was wearing a coat and tie. So I studied finance, hated it, and then went to work as a litigation consultant. I was horrible at it, and so I was very much lost.

He explains that he found comedy during an improv class, which he was taking to combat his fear of public speaking. He says that stand-up is very empowering.

When asked at the conclusion of the interview whether he was done having kids, Gaffigan comically alludes to the fact that he and his wife don’t use contraception (“there is no goalie”), but affirms that he’s seen the positive side of parenthood and would not be opposed to having more:

I can’t believe I’m saying this, but I mean well, I’m Catholic, my wife’s very Catholic – she’s a Shiite Catholic – so there is no goalie. But I’m not opposed to it. I know the positives that I can get from each of my children, and I do want to create my own nationality. Maybe there will be a country called Gaffganistan.