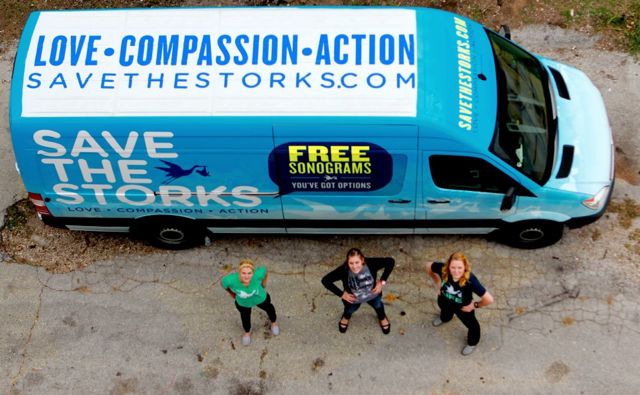 Jezebel’s Prachi Gupta attended the 2017 Conservative Political Action Conference over the weekend, during which she got a closer look at the display and representatives from Save the Storks, the pro-life group that travels the country with mobile ultrasound vans to help dissuade women from abortions and provide them with more humane pregnancy support options.

That, of course, isn’t how Jezebel spun it. Instead, Gupta would have you believe Save the Storks is all about religious indoctrination, medical misinformation, and risking women’s lives. Fortunately, however, being Jezebel, it’s easy to see the cracks in their narrative if you know where to look.

The most glaring cracks are in the below passage, and I’ve taken the liberty of annotating to fill in those cracks (see brackets):

Women seeking an abortion in America today are struggling. Thanks to anti-abortion laws and stigma, women may endure verbal and even physical harassment by protesters outside of abortion clinics [citation needed], face high costs and added burdens associated with traveling very long distances [which is only a bad thing if one presupposes that abortion is legitimate], because there’s no abortion clinic in their state [as of this January, there are 6 states with just one abortion facility, but none with zero], endure lasting emotional trauma if they are forced to have ultrasounds or carry a baby produced by incest or rape [citation needed], and may even risk death to desperately obtain a back-alley abortion [citation needed; this wasn’t even true before Roe v. Wade].

Gupta next tries to debunk the risks of abortion itself—and fails. Badly:

These are not the “risks” that [STS’s Julie] Rosati is talking about, however. “Abortion is dangerous,” she continues. “I believe it can cause negative physical effects.” She rattles off a number of organs, like the uterus, that will face a slew of unnamed “issues” and says, incorrectly, that abortion increases the risk of breast cancer. She then lists an alarming number of fake “emotional effects:” depression, regret, being triggered around the date of the abortion (something she called the “anniversary effect”), and that some women will be unable to go to baby showers for the rest of their lives.

That’s quite a list of lies! Fortunately, they should be familiar to regular Live Action News readers. First, presumably the risk to the uterus referenced here is perforation during an abortion, which Mayo Clinic confirms can happen and can impair women’s future ability to conceive, and which an anonymous abortionist once told pro-abortion Salon is so common that “those that lie and those who don’t do abortions” are the only doctors who have never done it.

Second, Gupta cites an American Cancer Society page that supposedly debunks the abortion-breast cancer link. It cites a number of studies, including one overview by the highly–politicized and credibility–challenged American College of Obstetricians and Gynecologists and another by the US National Cancer Institute. What they neglect to mention, however, is that not only is there quite a bit of research finding that there is such a link, but that one of those studies is by Dr. Louise Brinton, head of the National Cancer Institute’s Environmental Epidemiology Branch, Division of Cancer Epidemiology and Genetics—who also headed up the aforementioned NCI study, and came to reject his earlier conclusion.

Third, Gupta offers no evidence that abortion’s emotional harm is “fake,” so let’s show her what studies actually say:

At the end of that paragraph, the author sneers, “These are the things she tells to the usually low-income, desperate, and vulnerable women who approach her Mercedes seeking guidance.”

I imagine the above line comes across more impressively to Jezebel readers under the impression that the lies preceding it were true, but when one knows better, it’s a dud. In any event, Save the Storks’ advice is vastly more useful than Planned Parenthood’s advice to callers looking for prenatal care:

Though the organization doesn’t want women to have abortions, it refuses to offer women contraceptives or birth control, which lower the number of unintended pregnancies and therefore lower the rate of abortions.

Ah, the obligatory invocation of abortionism’s article of faith that we don’t really need to even have a conversation about abortion’s legality because it just so happens that doubling down on birth control distribution would be more effective than laws anyway, no matter what the facts actually show. No pro-abortion sophistry would be complete without it!

The horror! Why, once you get people praying, there’s no telling what crazy, reckless behavior they might get into next!

The real takeaway from the 3-1 number here is that little old CPCs are apparently doing a much better job of being there to help women than great big Planned Parenthood, despite the latter’s $1.3 billion in total revenue, including $353.5 million in private donations and $553.7 million in taxpayer subsidies. So without trying to, Gupta just made the case for why Planned Parenthood doesn’t need government funding after all. Oops!

Rosati’s hope is to catch women who might otherwise stumble into a Planned Parenthood clinic. She says “Planned Parenthood” in an ominous tone, as though the organization is the last stronghold of the Manson Family cult. “To change their mind based on their experience [in the van],” she says, “is a miracle.”

Yeah, where would anybody get the idea that there’s anything ominous, cultish, or Manson-esque about Planned Parenthood? I mean, it’s not as if they murder innocent children, slice up their bodies, and sell the parts. Oh, wait…

To the pro-abortion mind, literally slaughtering babies for convenience and profit is perfectly normal, but the slightest whiff of anything “evangelical” about Save the Storks creeps them out. That pretty much says it all, no?

Finally, Save the Storks’ Brenna Skattebo responded to Jezebel’s characterization of the group’s work in another article:

Jezebel’s claim that this free information is the same as a “lecture against abortion” is unfortunately consistent with a lot of “pro-choice” messaging. We often wonder, if the pro-choice side is so “pro-women,” why don’t they support us as we champion women emotionally and physically? And if they believe in “choice” then why do they complain when we empower women to make informed choices?