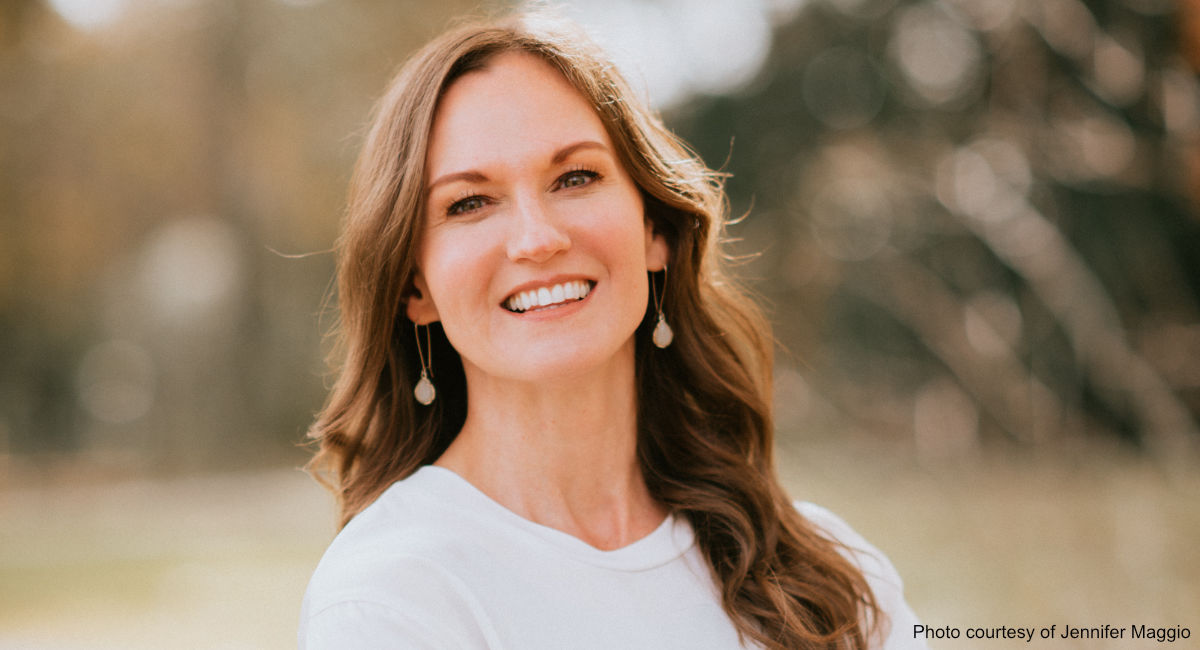 Jennifer Maggio’s young life was marked by heartbreaking loss, emotional trauma, abuse, and multiple unplanned pregnancies — obstacles that would seem impossible to overcome, except she had a powerful weapon: her faith. Raised by a father who struggled with addiction and married six times after the sudden death of her mother when she was just 17 months old, Maggio longed for a loving, stable relationship. Instead, she gravitated toward an unhealthy alliance with a young man who would eventually father her pregnancies. She miscarried twice, but at 17, gave birth to a healthy boy.

Maggio told Live Action News, “After my son was born, just a year later I got pregnant with my daughter. I was so embarrassed and ashamed, I even considered abortion, but I was raised in the church and knew it was wrong. A friend who had an abortion shared about how she was tormented by nightmares of screaming babies. That, too, was impactful.”

While she was grateful she chose life for her babies, those close to her wondered why she did not remain abstinent, given her religious background. Still, many questioned why Maggio didn’t terminate the relationship with her abusive boyfriend.

“The truth was, I was a broken woman who was drowning in devastation, wandering through life seeking joy and hope, peace, and restoration,” said Maggio. “Most days I felt as if I could barely breathe or function, much less think clearly. I knew I had disappointed my family and felt sure I was excommunicated from God.”

At 19, Maggio was raising two children, living in government housing, and relying on welfare and food stamps to live. Alone, without much money and isolated from her family and friends, with few parenting skills, Maggio struggled to move beyond her circumstances. Though she graduated high school as valedictorian and was offered college scholarships across the country, she says she squandered the opportunities.

Faith Renewed Results in a Transformed Life of Service

Maggio said, “I was broken-hearted, a victim of my poor decisions once again. The breakthrough came when I decided to go back to church. But this time, I was going to truly commit to the Lord by reading the Bible, tithing, and attending worship regularly. As a result, I became more on fire for God and less interested in worldly things.”

As her life turned around, Maggio flourished in a successful career and met her husband, who adopted her two children. Later, the couple became parents to a third child.

“Things were going well,” Maggio said. “But I never forgot the lonely, dark moments huddled on a bathroom floor in government housing as a single mom. I had a passion for helping single mothers thrive, so I started a Bible study in my living room in 2007, and from that, The Life of a Single Mom ministry was birthed in 2011.”

Maggio started the ministry to ensure every single mom has the support and resources she needs to prosper, and that no single mom walks alone. An advocate for abstinence and sustaining marriages, Maggio partners with churches of various sizes and denominations to start or improve single moms’ Bible studies, support groups, and ministries.

Maggio said, “We first teach the body of Christ about the data, meaning what we face as a nation regarding single-mom parenting. We then work with churches on effective strategies to launch successful single mom groups which can teach parenting classes, divorce recovery, addiction, and unwed pregnancy classes.”

The pro-life movement often faces criticism for lacking a holistic, long-term approach, Maggio points out. The Life of a Single Mom model seeks to bridge the gap by offering resources and online life skill educational classes, conferences, and events to single mothers of all ages and life stages.

“Every church should be involved in single mothers’ ministries, and it should encapsulate long-term parenting, financial, spiritual, and emotional health education, as well as mentoring and discipleship,” said Maggio. “Many churches just offer single events like donation drives but don’t understand the need to support moms long-term, beyond the pregnancy.”

Through serving single mothers, Maggio came to understand that their stories were multi-faceted and complex. She was spurred to write her first book in 2008, “Overwhelmed: The Life of a Single Mom,” after realizing that there were no Christian books on the market that adequately addressed their varying circumstances and offered encouragement. Maggio has since written three other books, including a guide to parenting and a 50-week devotional.

Maggio said, “Too many books and resources were heavy on theory and psychology and light on experience and authenticity. These women needed to know that God is real, loves them, and has a plan for them. They needed to know others, too, have experienced their pain and desolation but God is a redeemer and a restorer.”

In a new post-Roe landscape, Maggio is discovering that faith communities and churches are seeking solutions, realizing they may have taken a stance against abortion but don’t have a plan in place to aid mothers beyond birth. Pregnancy resource centers, too, need curriculum – all of which has impacted Maggio’s ministry as it plays an increasingly vital role in the pro-life movement.

Maggio could not have known that when she left her lucrative corporate career behind, more than 750,000 single mothers would be helped through the Life of a Single Mom ministry. While the ongoing goal is to continue launching single moms’ ministries in churches, new curriculum is now offered through Single Mom University. Every year, the ministry provides an array of resources including videos, podcasts, articles, online chat rooms, boot camps, and eBooks to assist moms and ministry leaders.

“We will continue to provide innovative ways for churches to serve single moms,” Maggio said. “We’re very excited that our most recent national single moms conference was the largest in history. I would have never dreamed that the moments of pain, suicidal thoughts, shame, lack, and devastation I suffered would be used for good.”