Convincing people not to feel remorse for a wrong act doesn’t make the act right.

When it comes to love, our world is suffering from a massive deficit. Along with that huge overarching need, there are many others. I’ve spent time working with the poor in the nations of Guatemala, Nepal, and Mozambique. My global wish list would include the things I desire all humans to have: clean water, nutritious food, a safe environment, and homes to call their own.

When it comes to something our planet has “way too much of,” I think of abortion. Abortion is an act absent of love. From gendercide in India, to forced abortion in China to America’s 40th year of legalized murder, we’ve lost an entire generation. That’s why I find it shocking that people out there are still fighting for more.

Abortion shouldn’t be “rare.” It should be accessible for anyone who needs it.

Steph also tweeted a thank-you to  Touré (co-host of MSNBC’s “The Cycle”) for his ridiculous comments on abortion. She wrote:

Thanks @Toure for having the courage to say, ‘thank God for abortion[.]’ 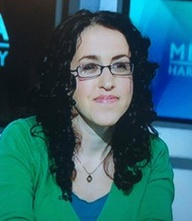 Herold is considered to be a “reproductive justice” activist. That’s a hip way of referring to a person who supports the termination of fetuses. In 2010 Steph wrote the phrase, “I had an abortion” in a hashtag on twitter. She encouraged women to use it to tell their abortion stories. Tweets popped up with people proclaiming the ways in which abortion had made their life better. Not all stories were happy, however. My friend and Silent No More speaker Kelly Clinger tweeted, “I had an abortion and I hate myself.” Her painful story of having two abortions caught the attention of 15,000 readers in a 24-hour period.

Steph is unapologetic in her support of abortion. She founded the website IamDrTiller.com to honor the late-term abortion doctor and provide a space for abortion providers to speak. On her Twitter account, she writes, “I talk about abortion all day and every day.” As I read through her writings, I even got the eerie sense that she loves abortion.

Steph’s work is troubling. I think it’s important for women to share the ways in which abortion has affected their lives. My concern lies is in the framing of the discussion. Is abortion really a positive choice women should be proud of? I’m not interested in shaming women who’ve aborted. I just want more than a one-sided picture of what post-abortive life looks like. Talking about positive abortion experiences is like looking for healthy romantic experiences on the TV show “The Bachelor.” The men and women gush about being in love, but it’s hard to believe. The brokenness is bare for any with eyes to see.

I’ve stood outside enough abortion clinics to know women aren’t skipping inside. There certainly aren’t skipping out after. Getting an abortion isn’t a trip to the spa, nor is it a Disney World vacation. It’s a life-altering decision that thousands of women suffer from for the rest of their lives.

I thank God and country that when I fell into a bad situation, abortion was there to save me and keep me on a path toward building a strong family I have now – and I pray that safety remains in place.

How do we respond to their assertions? First we must earnestly pray with compassion. I love the saying, “But for the grace of God, there go I.” We pray for hardened hearts to open and blinded eyes to see. Touré aborted a baby with a woman he knew was “not the one.” Later, when he married, his wife became pregnant, and he went to an ultrasound appointment with her. He shares:

It was a thrill to watch that boy grow inside her, but I must admit during that second trimester as we watched him move around on 3-D sonograms I saw how human and they were my life long belief in abortion rights was – let’s say – jostled. It was life colliding with belief system. I had to rethink my position, but in the end I remain committed to being pro-choice because I cannot imagine arguing against a woman’s right to control her body – and thus – her life.

This is heartbreaking. Touré had a moment of revelation, and he rejected it. Truth pierced his heart, and he reasoned it away. Perhaps he feels his current success justifies the termination of his child. It never has and never will. Touré may have gained a strong family with a woman he considers “the one,” but he destroyed the life of a “one” none will ever know.

It’s hard to hear stories like this, but it’s reality. We have to accept the fact that some people don’t believe that abortion is wrong or has negative consequences. I had a women brazenly tell me she had six abortions and it didn’t bother her at all. We can think women like this are hiding their pain, and they very well may be. Yet we have to acknowledge that some people are legitimately proud that they chose to abort. An example of this is comedian Chelsea Handler, who laughed about her abortion one moment and defends it the next.

Thankfully, just because someone isn’t repentant over an act, that doesn’t mean that the act isn’t wrong. People shoplift, hit their spouses, take drugs, drive drunk, and don’t have a problem with it. Most of us live by our own definitions of right and wrong. This is why we need laws to protect ourselves from each other. Laws and the punishments for breaking them help to restrain human wickedness. Martin Luther King, Jr. couldn’t convince the world that racism was wrong, but he did help get laws in place that protect people from it. This is where we must focus our fight for the unborn. They are little humans who deserve legal protection.

Look at slavery in America. Do you think slave owners were jumping for joy when the Emancipation Proclamation was passed? Slavery was still a justifiable business in their eyes. Slave owners didn’t just lack remorse for their actions. If it was up to them, they would have continued to enslave humans for years to come. Same goes for Nazi leaders in Germany. If the Allied soldiers didn’t come, the death toll would have continued to rise. Even if Roe v. Wade were overturned tomorrow, abortion doctors would still think it’s acceptable to slaughter children for a living.

Steph Herold and Touré can encourage women to be proud of their abortions all day long. Lack of sorrow over wrong actions will never make those actions right. Justifying abortion will never make abortion okay. Women can proclaim from the rooftops that abortion made them better, smarter, wiser, etc. Their proclamations don’t make any of those things true. Fathers can pay for abortions and deny their God-given role to protect the most vulnerable among us. They are only fooling themselves.

One day, the truth will be revealed. There will be a time ahead when our nation looks back and truly wonders what we’ve been celebrating. God have mercy on us.