No changes in the law for a few months? 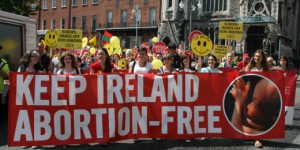 On Tuesday, a Cabinet meeting was held in Ireland to discuss abortion laws. According to CNN, the government will clarify through legislation that abortions are permissible only if a mother’s life, but not her health, is at stake. The action is based on a report from a group of experts on the issue. CNN reports that it will likely be months before the legislation is introduced.

According to Ireland’s Minister of Health, James Reilly, “… we will clarify in legislation and regulation what is available by way of treatment to a woman when a pregnancy gives rise to a threat to a woman’s life.” Reilly also noted that “at all times” the government will take “full account of the equal right to life of the unborn child.”

Controversy over the blood poisoning death of Savita Halappanavar, who original articles claim was denied an abortion (although official documents say the request was never made), has led to inquires by authorities, but no reports have been released.

A 1992 Irish Supreme Court ruling gave a woman the “right” to an abortion if her life is at risk, including by suicide.

You might also be interested in this article by Josh Craddock on a report by the British Department of Health.