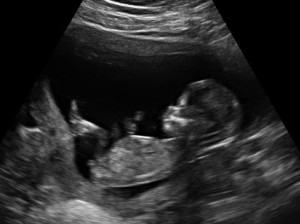 Simon interviewed an abortion provider named Dr. William F. Harrison and observed abortions at his clinic. Harrison died in 2010, after closing down his clinic because of health reasons.

The article quotes Harrison saying, “I am destroying life.”

Simon described witnessing an abortion on an 18-year-old girl. The author says the girl had not told her parents about her pregnancy. The unborn baby was 13 weeks along. At 13 weeks, the child has fingers, complete with fingernails. If female, the child has a uterus of her own. He or she can respond to touch and has both a heartbeat and brain waves. He can also suck his thumb. (See ultrasound pictures of 13-week-old babies here.)

According to the author:

Harrison glances at an ultrasound screen frozen with an image of the fetus taken moments before. Against the fuzzy black-and-white screen, he sees the curve of a head, the bend of an elbow, the ball of a fist.

“You may feel some cramping while we suction everything out,” Harrison tells the patient.

A moment later, he says: “You’re going to hear a sucking sound.”

The abortion takes two minutes. The patient lies still and quiet, her eyes closed, a few tears rolling down her cheeks. The friend who has accompanied her stands at her side, mutely stroking her arm.

When he’s done, Harrison performs another ultrasound. The screen this time is blank but for the contours of the uterus. “We’ve gotten everything out of there,” he says.

Right after her abortion, the teenager said:

“There’s things wrong with abortion,” she says. “But I want to have a good life. And provide a good life for my child.” To keep this baby now, she says, when she’s single, broke and about to start college, “would be unfair.”

The article also profiled several other women coming in for abortions.

A high school volleyball player says she doesn’t want to give up her body for nine months. “I realize just from the first three months how it changes everything,” she says.

Kim, a single mother of three, says she couldn’t bear to give away a child and have to wonder every day if he were loved. Ending the pregnancy seemed easier, she says – as long as she doesn’t let herself think about “what could have been.”

Many pro-lifers find it hard to understand why some women would rather abort than put the baby up for adoption – pro-lifers tend to think it would be better to adopt out a child than to kill that child. But often the thought of giving up a baby is painful for women, and many women have heard the message over and over again that abortion is not killing.

Amanda, a 20-year-old administrative assistant, says it’s not the obstacles that surprise her – it’s how normal and unashamed she feels as she prepares to end her first pregnancy.

Amanda was 15 weeks pregnant and has not told her boyfriend about his child. Amanda also says:

I’ve been praying a lot and that’s been a real source of strength for me. I really believe God has a plan for us all. I have a choice, and that’s part of my plan.

As much as pro-lifers don’t like to admit it, many religious people get abortions. There are some churches that support abortion. In a recent Facebook post, Abby Johnson mentioned that a member of her Episcopalian church told her to leave after she became involved in the “antichoice” movement. One study says that many women who have abortions claim to be Christian and that one out of five women coming in is a self-identified born-again or evangelical Christian (1).

Later in the article, two other women give their reasons for having abortions.

His first patient of the day, Sarah, 23, says it never occurred to her to use birth control, though she has been sexually active for six years. When she became pregnant this fall, Sarah, who works in real estate, was in the midst of planning her wedding. “I don’t think my dress would have fit with a baby in there,” she says.

The last patient of the day, a 32-year-old college student named Stephanie, has had four abortions in the last 12 years. She keeps forgetting to take her birth control pills. Abortion “is a bummer,” she says, “but no big stress.”

People on both sides of the abortion debate often say that abortion is an agonizing decision for women. They say that women do not take abortion lightly. Many pro-lifers view women as the second victims of abortion. Although this is often true, it is the sad case that some women do use abortion as birth control.

The clinic that Dr. Harrison works at makes an effort to shield women from guilt. In the abortionists’ own words, “[w]e try to make sure she doesn’t ever feel guilty … for what she feels she has to do.”

The article goes on to say:

For the few women who arrive ambivalent or beset by guilt, Harrison’s nurse has posted statistics on the exam-room mirror: One out of every four pregnant women in the US chooses abortion. A third of all women in this country will have at least one abortion by the time they’re 45.

“You think there’s room in hell for all those women?” the nurse will ask.

If the woman remains troubled, the nurse tells her to go home and think it over.

“If they truly feel they’re killing a baby, we’re not going to do an abortion for them,” says the nurse, who asked not to be identified for fear protesters would target her.

This sounds all well and good, but right after this statement, the article goes on to quote this very same nurse saying to a teenager who is 5 weeks pregnant:

“It’s completely formed about nine weeks,” the nurse tells her. “Yours is more like a chicken yolk.”

According to The Biology of Prenatal Development:

Between 4 and 5 weeks, the brain continues its rapid growth and divides into 5 distinct sections.

The cerebral hemispheres appear, gradually becoming the largest parts of the brain.

You can watch the heart of a 4-week-old unborn baby beating at this link. The baby, even at 5 weeks, is hardly an egg yolk.

Although Dr. Harrison admits that what he’s doing is killing, he contradicts himself later by saying, “It’s not a baby to me until the mother tells me it’s a baby.”

As of 2005, Dr. Harrison had performed over 20,000 abortions. He left practice in 2010 and died shortly afterward. When Harrison left practice, his abortion clinic closed its doors. He was unable to find another doctor willing to perform abortions at his clinic.