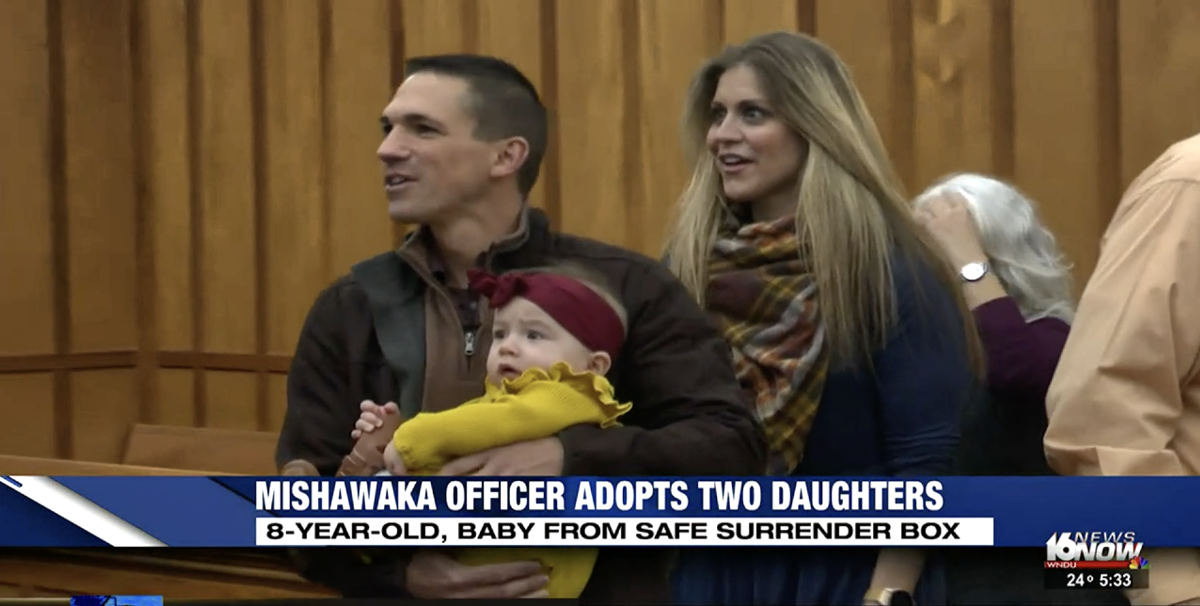 An Indiana police officer and his wife have adopted a baby girl rescued through a Safe Haven Baby Box. WNDU reports that Bruce and Shelby Faltynski adopted baby Myah on November 18, National Adoption Day, months after she was found surrendered in the baby box.

Safe Haven Baby Box is an organization that installs temperature-controlled, monitored boxes in firehouses, hospitals, and other safe haven locations around the country. The box allows a parent to anonymously and safely surrender an infant. Each state has its own time period during which a parent may safely surrender an infant; in Indiana, parents can do so in the first 30 days after birth. While there are 113 boxes installed in states throughout the country, 90 of them are located in Indiana, likely due to the fact that the group’s founder is based in the state.

“The doctor thought [she was] maybe less than 24 hours old when she was initially surrendered in the Safe Haven box in Lake County,” Shelby told WNDU. “We are so grateful for Myah’s birth mom; she made a really courageous decision.”

Myah is the second child adopted by the couple this year. In March, they finalized the adoption of their 8-year-old, Kaia. Just a few weeks later they received a call from the Department of Children’s Services that a baby had been surrendered and needed a home.

After she was surrendered, Myah spent some time in the NICU because doctors realized she had suffered a stroke. Her parents say she is doing well now and meeting all her milestones.

The Safe Haven Baby Box organization was founded by Monica Kelsey, who herself was abandoned and later adopted as an infant.

“There’s tons of options for parents out there,” Kelsey previously said. “[The mother] can call us at our crisis hotline 1-866-99BABY1. It’s on the front of every box, it’s on our website. But there are options. This is a final option. We don’t want you to choose this first, but if you have exhausted all of your other options, we want you to choose this last.”