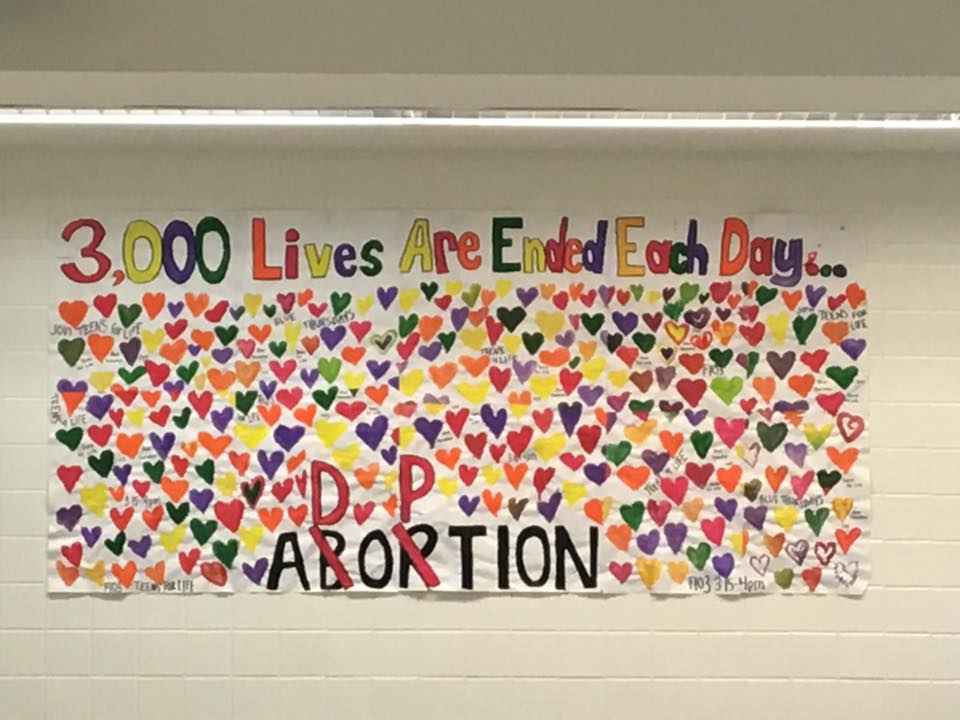 According to Liberty Counsel, a nonprofit litigation, education, and policy organization based in Florida, officials at Carmel High School in Indiana may have violated the rights of pro-life students by censoring a poster created by Carmel Teens for Life, allegedly after another student became offended by the poster.

The poster features hand-painted hearts and the words, “3,000 Lives Are Ended Each Day,” and took the students 25 hours to make. The pro-life student group explained in a Facebook post that their goal was to “visually present how many lives are lost to abortion daily – while also presenting adoption as the solution to this problem!”

The students have said they received permission from school officials to hang the poster but were later told it had not been approved. In a press release, Liberty Counsel notes that the “poster was, in fact, approved for display, as evidenced by approval stamps on each of its component pages, and it complied with club signage guidelines.”

Liberty Counsel also says that the school’s attempts to stifle pro-life speech did not stop at removing the poster. The Indy Star reports:

Administrators, Liberty Counsel claims, also wanted Carmel Teens for Life officers to no longer use the word ‘abortion’ in written and oral communications, including posters and on their Facebook page. On Friday, they asked the club members to sign an agreement barring them from seeking outside legal help.

According to Liberty Counsel, the school threatened to force pro-life club sponsors to resign if the agreement was not signed.

Liberty Counsel’s Richard Mast, Jr., says that Carmel High School has allowed controversial posters in the past, including pro-gay rights and other political posters. Therefore, Mast contends, removing the pro-life poster represents a case of unfairly singling out a specific viewpoint for censorship.

In a letter to Superintendent Nicholas Wahl, Mast wrote, “To avoid legal action, please immediately reverse this decision and confirm that the school district will respect the private speech of public school students.”

“The worst kind of discrimination under the First Amendment is viewpoint discrimination,” Hill told The Indy Star. “If they permit groups to put up posters generally, but single out this one group individually, they can’t do that. [Public schools] cannot pick and choose which viewpoints get heard.”

School officials stated that they are taking the claims “very seriously,” and hope to resolve the situation peacefully.

“We are reviewing the matter to determine what happened and to respond to our students and community in an appropriate and respectful manner,” officials told The Indy Star.

Unfortunately, Carmel High School’s censorship of students’ pro-life speech is not exactly an isolated case. Live Action News has covered a range of similar cases, including a Nebraska high school which refused to allow a student-led pro-life group, a pro-life college student who was threatened with a bad grade because the professor considered her pro-life values to be “wrong,” and a Kentucky high school which banned pro-life flyers featuring a Mother Theresa quote.