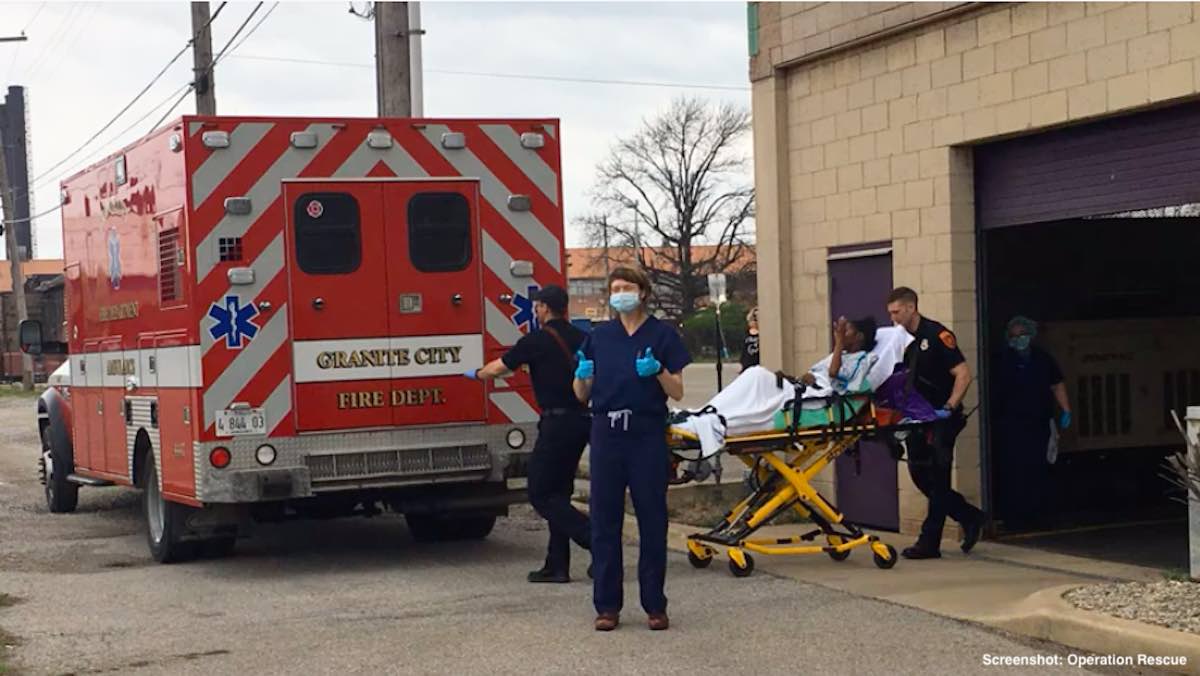 An abortion facility near the Illinois-Missouri border injured two women within just days of each other, the latest in a disturbing string of seemingly botched abortions and dangerous behavior.

According to Operation Rescue, the first emergency took place on October 15th at the Hope Clinic for Women in Granite City, Illinois. Instead of being transported to the Gateway Regional Medical Center hospital emergency room across the street, the injured woman was loaded into an ambulance, which took her to an unknown location.

“[W]e saw an ambulance drive into the front of the Hope Clinic parking lot. Then, a few minutes later, we saw a young woman being wheeled out on a gurney through the front door of the clinic. She was sitting almost upright on the gurney. She was in what looked like a knee-chest position,” one pro-life witness told Operation Rescue. “From where we were standing on the sidewalk, her abdomen looked large, and her face very pale. She had no visible IV or oxygen, and nobody except the EMTs were with her.”

Another witness agreed that she did not appear to be well, and that she was alone. “Her facial expression was angst, pain, despair — it’s hard to describe,” they said. “There wasn’t anyone with her other than the 3 EMT’s.”

“It seems unusual, and maybe a bit suspicious, that there would be no 911 record for the October 15th emergency at Hope Clinic for Women, especially when we have easily obtained records for other medical emergencies at that facility,” Troy Newman, President of Operation Rescue, said in a statement. “Unfortunately, no photos exist of the emergency, so it is difficult to know exactly which units responded.”

The second emergency took place just two days later on October 17th, but this time, no ambulance was called. Instead, abortion facility staffers pushed the patient across a busy street in a wheelchair to the Gateway emergency room. This seems to be contradictory to the guidelines published in the Guide for Interfacility Transfer published by the National Highway Traffic Safety Administration.

Earlier this year, two women were injured within six weeks of each other at this same facility, Hope Clinic. One of them had to be carried down the stairs by first responders due to a broken elevator. In another disturbing example, a woman was taken across state lines to Barnes Jewish Hospital in St. Louis, where abortionist Erin Lewis has admitting privileges, instead of to the hospital across the street, which may have also been the case in the October 15th incident. This is a 17-minute drive, which could have wasted valuable time needed to help the injured woman. This trip across state lines also took place in the midst of the first wave of the COVID-19 pandemic, further putting people at risk.

The Hope Clinic for Women has previously been cited for numerous health violations, including failure to prevent potential cross-contamination and infection, as well as a lack of properly working equipment. The building was also not up to safety standards, and online reviews have harshly criticized the facility. Most disturbing is the fact that the abortion industry in Illinois operates largely unchecked — meaning countless women could be injured there, and the state is unlikely to do anything about it.