Time to step up.

The appalling rate of babies with Down syndrome who are aborted is no secret. When parents receive a prenatal diagnosis, 9 times out of 10, they will choose to abort that child, simply because the baby has an extra chromosome. We blame things like misinformation and prenatal testing, but there’s a much more disturbing problem simmering beneath the surface: the lack of Down syndrome parents willing to speak out against it. 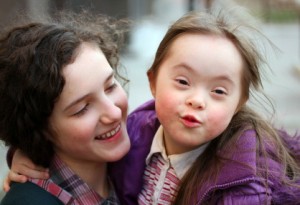 In The Atlantic, Theo Malekin, whose little girl has Down syndrome, tried to explain how his view of Down syndrome was much more accepting and understanding than his mother’s generation’s was.

My daughter Hazel was born with Down syndrome five years ago. I found myself thinking of Tom a lot in the months that followed her birth. My wife and I, and especially Hazel, are lucky that things have changed since Tom died. Hazel has had an array of specialists who have helped her learn to walk and talk and she goes to a regular elementary school with other ‘normal’ kids. She still has challenges. We haven’t got her potty-trained yet. On the other hand, she knows her alphabet and she can count better than some of her classmates. She likes learning and she is enthusiastic about going to school. Much more than I ever was. I hated school.

… Love has a way of making statistics irrelevant, and it brings its own kind of knowing. I do not love my daughter any less because she has Down syndrome. Her diagnosis says very little about who she is. She is not a disease or a syndrome but an individual: affectionate, naughty, infuriating at times, stubborn, self-willed and utterly charming. Certainly she has medical problems and developmental challenges not faced by other children. I’m not saying those don’t exist. But they’re one part of a much bigger picture.

… It is also an argument for changing attitudes that appear self-evident to too much of the general population. You cannot know if someone else’s life is worth living without asking them and without even knowing them. A disability does not necessarily stop you living a full, satisfying life. Oddly enough, I’m not sure that disabilities have anything to do with living full satisfying lives. When it comes to Hazel, her life is not a burden to her family but an unending source of delight. For my part, I cannot imagine life without her. But most importantly, her life is valuable to herself, and definitely worth living.

It’s a great thing to point out – that his daughter has Down syndrome, and her life is still valuable and worth living. But Malekin immediately follows it by making sure everyone knows that it’s totally cool if you choose to kill your baby with Down syndrome.

This is not intended as an argument against abortion.

So such a life is valuable and worth living only some of the time? It’s not valuable enough to speak out against aborting a baby just because he or she has an extra chromosome, apparently.

In the New York Times Motherlode blog, which focuses on parenting, Allison Piepmeier talks about how delightful her daughter with Down syndrome is. She also bends over backwards to excuse parents who choose to kill their children with Down syndrome.

Repeatedly women told me that they ended the pregnancy not because they wanted a “perfect child” (as one woman said, “I don’t know what ‘perfect child’ even means”) but because they recognized that the world is a difficult place for people with intellectual disabilities.

One woman told me, “The thing is I could not, in good conscience, from the get-go, know that my child has these setbacks in life.” Another identified adulthood as the challenge: “There is no part of caring for an infant or school-aged child with Down syndrome that we didn’t think we could handle. We chose to terminate mostly on the basis of our understanding of the challenges and quality of life he and our family would face if/when he lived to be over age 21: his middle age, and end of life.”

Another woman talked quite a bit about rape. She was assaulted as a child, she knew that the statistics for sexual abuse were high for people with intellectual disabilities, and she was determined that her daughter would not experience that, so that was one of the reasons she terminated her pregnancy. She referred to her abortion several times as “the protective choice.”

So because their lives might be a little more difficult, it’s OK to deprive them of their chance to live. Because they might have some setbacks (is there a human who doesn’t have setbacks in life?), it’s OK to kill them. Because one’s daughter might be sexually assaulted, it’s OK to “protect” her by killing her. She can’t get raped if she never gets the chance to live, am I right? And of course, having a “normal” child means that that child’s life will definitely be sexual assault-free.

These excuses are sickening. But what does it say when even parents of children with Down syndrome refuse to speak out against the appallingly high abortion rate – and even go out of their way to excuse and defend it?

How can we expect others to accept our children, and see them as valuable, important, worthy human beings, if we don’t do the same?