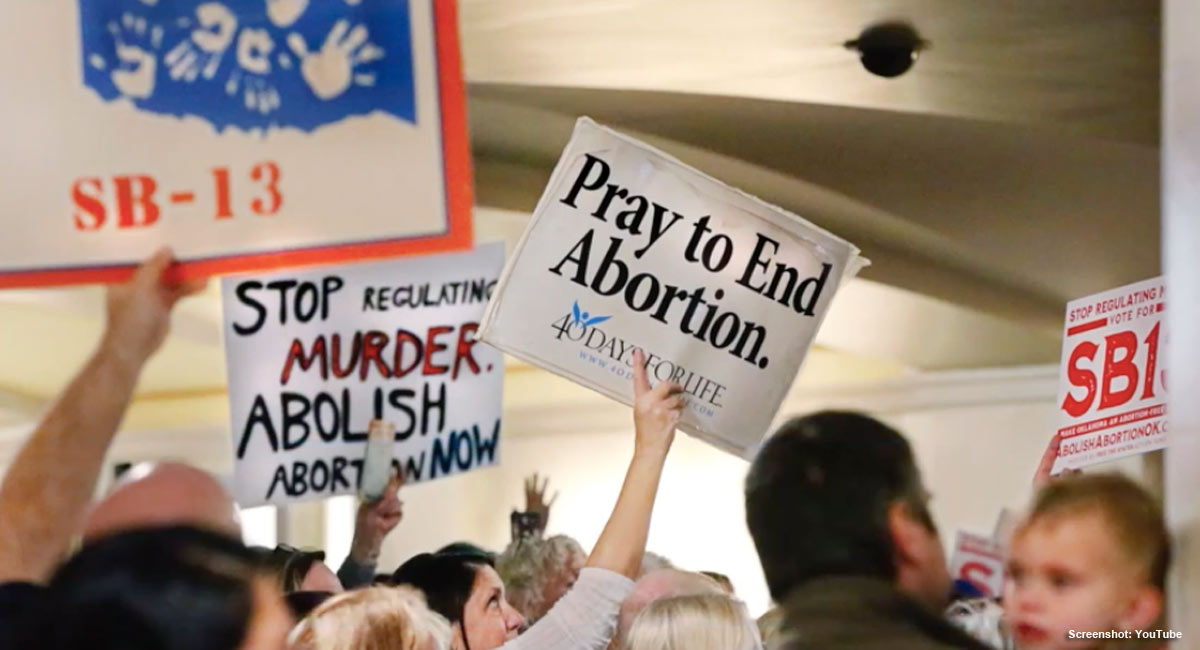 On Tuesday, about 400 people gathered at the Oklahoma state Capitol to advocate for the abolition of abortion and to show their support for anti-abortion legislation before the state senate. They chose this week in particular because of the initiatives introduced in the legislature, most notably Senate Bill 13 and House Bill 2591. “Whether they’re inside the mother still or outside, if they’re innocent and can’t speak up for themselves then we need to speak up for them,” said Angelina Hein, a supporter of Senate Bill 13, according to KJRH.

Senate Bill 13, also known as the “Abolition of Abortion in Oklahoma Act,” seeks to establish human rights as beginning from the moment of fertilization:

It is the intent of the Legislature to provide to unborn children the equal protection of the laws of this state; to establish that a living human child, from the moment of fertilization upon the fusion of a human spermatozoon with a human ovum, is entitled to the same rights, powers, privileges, justice and protections as are secured or granted by the laws of this state to any other human person; and to treat as void and of no effect any and all federal statutes, regulations, executive orders and court rulings, which would deprive an unborn child of the right to life.

The Abolition of Abortion in Oklahoma Act would make abortion a homicide punishable by up to life imprisonment. The law would also direct state law enforcement agencies to enforce the law in spite of any contrary federal rulings, orders, or statutes.

Many have been reluctant to support the controversial bill and previous versions of it in years past, due to concerns that the bill would easily be struck down in court, as well as concerns about prosecuting women for abortions. In order to receive a hearing before the the Health and Human Services Committee, the bill’s sponsor, State Sen. Joseph Silk, agreed to make some changes to the language demanded by the committee’s chairman, yet it remains unclear whether Silk’s changes will be acceptable and thus be heard by the committee.

The second bill, House Bill 2591, would make failure to report evidence of the rape of a minor grounds for termination of Medicare eligibility. HB 2591 passed the Oklahoma House on February 11 by a vote of 79-20, and will now move to the state senate. Planned Parenthood released a statement opposing the bill: “We are deeply concerned that this bill is a veiled attack on abortion providers. Every person deserves the right to access the care they need from a provider they know and trust. And for thousands of Oklahomans, that choice is Planned Parenthood.”

The rally at the state Capitol focused on SB 13. Attendees held hand-made signs saying, “Abolish Abortion OK” and sang hymns like Amazing Grace. In his address to the crowd, former gubernatorial candidate Dan Fisher, an ardent supporter of SB 13, expressed pessimism about the prospects of overturning Roe v. Wade. Nevertheless, he encouraged defiance of what he considered to be an unjust ruling: “When did the Supreme Court become the final arbitrator on what is right and what is moral?”

According to KTUL, Oklahoma Governor Kevin Stitt indicated that he would sign any bill that would protect preborn human beings.