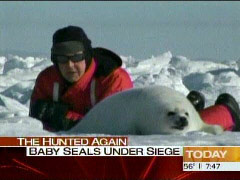 Creating a world none of us should want to live in.

One of the left wing’s most depressing ironies is how the same people who can be so dismissive toward live human babies will often move mountains to protect endangered species or animals subjected to inhumane conditions – how some people can have less empathy for a member of their own species than they do those of another.

Though she didn’t adopt that position herself, one of our commenters recently alluded to the backward thinking that makes it possible:

Is societal consensus really all that distinguishes the unborn from animals? No, but believing so is a logical conclusion from pro-aborts’ flawed premises.

Once you deny natural human rights and the possibility of souls (or any comparable source of human sanctity), you’re left with only a few ways to determine the ethical treatment of living beings. Arguably the most substantive of these is a utilitarian framework that grants organisms respect and protection proportional to their ability to experience suffering or desire things that harm would deny them. So, for instance, it’s okay to abort an embryo that won’t feel anything and doesn’t know what it’s missing out on, but slaughtering suffering cows is monstrous. The difference between man and beast is no longer one of kind, but merely of degree.

Such a worldview may be consistent, but it ultimately fails because it denies both human and animal nature, and how the difference between the two really is one of kind. In the animal kingdom, survival of the fittest is the natural order, a world of predator and prey, where ethics and rights are completely alien concepts. This is a truth which Benjamin Franklin illustrates with simple intuition in his autobiography:

Hitherto I had stuck to my resolution of not eating animal food, and on this occasion I considered, with my master Tryon, the taking every fish as a kind of unprovoked murder, since none of them had or ever could do us any injury that might justify the slaughter. All this seemed very reasonable. But I had formerly been a great lover of fish, and when this came hot out of the frying-pan, it smelt admirably well. I balanced some time between principle and inclination, till I recollected that, when the fish were opened, I saw smaller fish taken out of their stomachs. Then thought I, “If you eat one another, I don’t see why we mayn’t eat you.”

Humans, though, are vastly different. One of the defining differences between man and beast is our rationality: the ability to reflect on our nature, our place in the world, and to rise above instinct – an ability that yields uniquely human phenomena such as philosophy, religion, culture, government, charity, art, and more. No genetic roll of the dice can account for this difference; it makes sense only if there is something unique to humanity, some miraculous source of our potential that is so different from animal worth that it demands an entirely different, more rigorous framework for determining when and whether it can be extinguished.

Dennis Prager explains the danger of a world where human life isn’t recognized as sacred – “if we are not [created in God’s image], we are created in the image of carbon dioxide. Which has a higher value is not difficult to determine.”

That is why over the course of 30 years of asking high school seniors if they would first try to save their dog or a stranger, two-thirds have voted against the person. They either don’t know what they would do or actually vote for their dog. Many adults now vote similarly.

Why? There are two reasons. One is that with the denial of the authority of higher values such as biblical teachings, people increasingly make moral decisions on the basis of how they feel. And since probably all people feel more for their dog than they do for a stranger, many people without a moral instruction manual simply choose to do what they feel.

The other reason is that secular values provide no basis for elevating human worth over that of an animal. Judeo-Christian values posit that human beings, not animals, are created in God’s image and, therefore, human life is infinitely more sacred than animal life […]

That is why a Tucson, Ariz., woman last year screamed to firefighters that her “babies” were in her burning house. Thinking that the woman’s children were trapped inside, the firemen risked their lives to save the woman’s three cats.

Those inclined to dismiss these examples as either theoretical (the dog-stranger question) or extreme (the Tucson mother of cats) need to confront the very real question of animal experimentation to save human lives. More and more people believe as PETA does that even if we could find a cure for cancer or AIDS, it would be wrong to experiment on animals. (The defense that research with computers can teach all that experiments on animals teach is a lie.) In fact, many animal rights advocates oppose killing a pig to obtain a heart valve to save a human life.

Equating humans with animals and reducing our rights to whatever our fellow citizens are kind enough to bestow upon us might be useful in justifying the killing of the unborn, but ultimately, doing so creates a world none of us should want to live in.