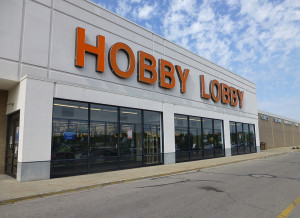 I’m in Texas for the holidays. My fiance and I came here to spend Christmas with one of his dear childhood friends. It’s been a joy to get away from the snowy New England streets and relax under the Texas sun. In the past I’ve visited Houston and Dallas to participate in prayer meetings focused on ending abortion. One of my favorite memories of Texas was the bus trip I took from Atlanta to Houston to pray in front of the largest abortion clinic in the nation. From those prayer meetings to Texas’s recent ban on abortion after twenty weeks, I’m proud of the way many in the state have engaged themselves in the pro-life cause.

Earlier I was driving around Rockwall in a friends pick up truck looking for a late Christmas present. I asked the friend to take me to Target and he gladly obliged. On the way to the store, we passed a Hobby Lobby. The big bright orange letters on the brown store put a smile on my face. I live in Connecticut, a state that’s sadly deprived of Hobby Lobby. I’ve been following Hobby Lobby’s court case that’s centered around their refusal to provide insurance coverage for their employees to get forms of birth control that could cause abortions.

The Christian corporation already provides sixteen forms of birth control for their employees. The founders moral stand and strong faith prevents them from providing any form of birth control that can destroy the gift of life. Hobby Lobby’s case should be decided by the Supreme Court this summer. Those who are following this case know it’s about more than contraceptives.

This is a case about religious freedom, the right for corporations to follow their faith and the need for limited governmental involvement in those decisions making. By refusing to pay for contraceptive in Obama Care Hobby Lobby is putting principle before profit and faith before financial gain. In doing so they are taking a big risk. If they lose the case they can be fined 1.3 million dollars a day for refusing to go along with the Affordable Health Care Act.

When I saw the Hobby Lobby store, I knew I had to support them. It didn’t really matter what I bought. I just wanted to give my money to a company that is standing for life. As I walked through the aisles I was tempted to buy almost everything I saw. I’ll admit it’s an added benefit that the store has really cute stuff.

As I was checking out of the store I began a conversation with my sales clerk Natalie. Natalie was a young women, likely in her early twenties. I asked her if she knew about the Supreme Court case and what she thought about it. To my delight Natalie said Hobby Lobby’s stand on abortion was what made her want to work for the organization. In her interview she told them she was pro-life and shared her support for their decision regarding birth control. Along with working at Hobby Lobby Natalie also helps women facing crisis pregnancies. She told me about an organization she’s worked with called ‘Gabriel Project‘ that connects pregnant women with trained mentors to guide them through their pregnancy.

I told Natalie that I wrote for Live Action News and when I did she beamed. She told me she read our news blog and said she read a story about the Hobby Lobby case on our site. I let Natalie know I survived an abortion and thanked her for standing for life. Natalie looked at me with a glowing face and asked if she could give me a hug. When I said yes she came from behind her counter, opened up and arms wide and squeezed me. She thanked me for being a voice for life.

It’s not everyday I buy a gift and receive much more than what I purchased. Today I caught a glimpse of faith in action. A young woman who told me that even if Hobby Lobby lost their case, shut down and she lost her job, she wouldn’t regret working for a company with strong principles. Along with getting a Christmas gift I bought a beautiful wall plaque that says, ” And we know that in all things God works together for the good of those who love Him, who have been called according to their purpose, Romans 8:28.”

When I look at that verse on my wall I’ll remember my trip to the Hobby Lobby store in Rockwall and Natalie’s passion for life. I’ll continue to pray that God works all things together for good for Hobby Lobby and their Supreme court case.