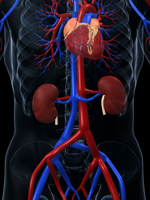 A common argument in favor of abortion goes something like this:

A stranger needs a kidney transplant, or he will die. You are the only tissue match. Should you be forced to give up your kidney to save the stranger?

If we want to make the imaginary situation more akin to abortion, the scenario would have to go more like this:

You and your boyfriend/husband have a hobby that involves use of toxic chemicals that are fairly safe for adults, but can cause fatal kidney problems in children. Knowing this, you nevertheless pursue this hobby, exposing your child to the toxic chemicals. Your child ends up suffering kidney failure as a result. Should you be required to submit to a temporary transplant of one of your kidneys for the nine months it will take his kidneys to heal, or should it be perfectly legal and socially acceptable for you to hack him to death with a machete so you don’t have to deal with any of this situation?

Does it look just a tad different now?

There is also one fundamental difference between the kidney donor scenario and abortion: the person with the failing kidneys is approaching the end of his natural life. The fetus slated for abortion, however, is at the beginning of her natural life. In the kidney donor scenario, refusing a kidney is a decision not to make a noble sacrifice to extend his life. It is a decision to refrain from intervening. Aborting the fetus is taking an action to deprive her of the decades of life that she could expect to have. In the kidney donor scenario, nothing is being stolen from the ailing person. In abortion, a choice is made to intervene in another person’s life; an entire lifetime is stolen.

Editor’s Note: This article was first printed at Real Choice on May 15, 2009, and is reprinted with permission.