Many of us have worn it, and others have surely seen it — the iconic pro-life “Precious Feet” pin. But what’s the story behind this symbol?

In the early 1970’s, Dr. Russell Sacco, a urologist from Oregon at the time, was aware of abortion prior to Roe v. Wade because of those who were speaking out on the topic. “I knew as a doctor that abortion kills children; they kill human beings,” he stated in an interview published on Vimeo.

Dr. Sacco said he began reading “anatomical books,” and when the Supreme Court ruled that murdering the preborn was “legal,” the doctor became, in his words, “furious.”

It was shortly after this that Sacco met a pathologist who was also anti-abortion. This pathologist “… was supposed to take the children that had been killed and destroy the bodies. But he told me that he didn’t do that; he just didn’t like to do that.”

Dr. Sacco said that this pathologist had preserved the babies’ bodies in a bucket of formaldehyde, which he showed Sacco. “… [I]n the bucket were about seven or eight infant bodies. It was a little bit shocking for me to see that but, there they were.”

Dr. Sacco asked the pathologist if he could photograph the babies “so that I could put it on slides and I could go around and give talks on how we should save and protect the prenatal children.” 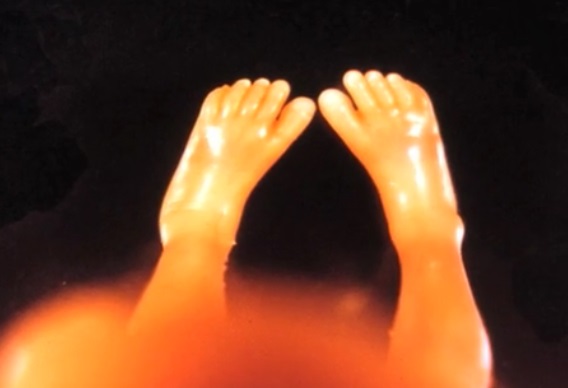 Dr. Sacco said he took out “one body at a time” to photograph them. Then, he catalogued each child and their estimated ages.

After developing the film, he discovered that the images of the feet were “better than I had thought. I really thought that… maybe God did that one for me.”

The image, which Dr. Sacco refused to copyright so it could be used worldwide, has been referred to as “Tiny Feet,” “Little Feet,” and “Precious Feet.”

But it was in Dr. Sacco’s meeting with Dr. John Willke that this photograph became famous.

Willke has been described by some as the father of the pro-life movement; he founded Cincinnati Right to Life in 1970, and later joined National Right to Life’s board. In 1991, he founded the Life Issues Institute and served there until his death in 2014. A tribute published by National Right to Life says Willke, a devout Catholic, “helped form the foundation of right-to-life educational efforts through the development of the ‘Willke slides’ on fetal development and abortion…”

In 1971, Dr. Sacco attended a speech given by Dr. Willke to the California Pro-life Council. After the event, several attendees and organizers were sitting and chatting in the hotel. Dr. Willke sat on the floor next to the couch due to a lack of seating in the room, and directly behind him was Dr. Sacco. Dr. and Mrs. Willke recounted what happened next in their book, Abortion and the Pro-life Movement, an Inside View:

Almost casually he [Dr. Sacco] said to Jack [Dr. Willke], “You might be interested in a few slides I’ve taken. ” He fished into his briefcase and came out with a few Kodachrome slides.

One by one, Jack held them up to the light of the lamp. One of them was “Tiny Feet.” Jack was fascinated. Could he have a copy? Could he use it? Dr. Sacco generously agreed.

Dr. Willke used that image in his book Handbook on Abortion. Following that, the picture was printed in early pro-life brochures such as “Life and Death” and “Did you Know?” The photo soon “went viral,” as they say, and was published in countless flyers, books and pamphlets.

That photo then inspired an Arizona couple, Ellis and Virginia Evers, the founders of Heritage House, which now offers the pins for purchase:

On January 22, 1974 Virginia and Ellis Evers ran across a full page ad in their local newspaper in San Diego, California. Prominent in the ad was a picture of the tiny feet of a ten week old unborn baby held between a man’s fingers and thumb. Inspired by the remarkable photo, Virginia Evers felt these little feet would be the ideal Pro-Life symbol. With love and dedication for the unborn, Virginia designed the “Precious Feet” lapel pin.

Dr. Willke was at first unsure of becoming a pro-life activist. But that soon changed. In an interview with LifeSite News, he recalls his reply to Fr. Paul Marx, who asked him in 1970 what he was doing about abortion.

“If we get caught up in this, it will swallow us up. No thank you,” Dr. Willke told Fr. Marx, the founder of Human Life International. “I was perfectly content to be a family physician and deliver a lot of babies,” he told LifeSite News in that 2010 interview.

Then, after receiving an invitation to speak on abortion, he said that when he agreed, he swore it would be “just once.” He was then asked to take an interview about abortion. “Just once,” he told the invitee.

But the invitations continued to pour in, and by 1971, the Willke’s had published their first book, Handbook on Abortion, which quickly sold out at a leadership conference they attended, going on to sell millions of copies. “And we’ve been on the treadmill ever since,” Willke said.

That book was instrumental in educating many on the issue of abortion in those early days. In fact, it was an image of an aborted child published in that book which inspired Live Action’s founder, Lila Rose, to become a pro-life activist.

“When I was a young girl, I had an encounter with abortion where I actually came across the image of a child who’d been the victim of a first trimester suction abortion,” Rose recalled. “You can very clearly see a child, with tiny formed arms, little tiny legs and this tiny little face, but who had been torn apart. As a nine-year-old, my heart was just cut; I thought, ‘Is this real? Is this really happening?’ I wanted to understand why it was happening….”

As Dr. Willke spoke to crowds and medical professionals, he would vividly describe the horrifying detail about the violent act of abortion. Willke used slides of fetal photos he had obtained from physicians sympathetic to the cause. About the same time, abortion victim imagery was being introduced to the pro-life movement as a vital educational tool.

“Pro-lifers understand that if the descriptions were effective, photographs would be even more so,” author Daniel K. Williams recounted in his history of those early years, summarized in his book, Defenders of the Unborn.

“It was Jack [John] Willke’s use of images that proved especially effective,” he wrote.

Williams pointed out that Dr. Willke made some of the first pro-life documentary films, including one that contained footage of early vacuum aspiration abortion. “The image of the fetus being sucked into the tube and whisked away was particularly powerful,” Williams wrote.

“To those who objected to graphic representations of abortions,” Williams wrote, “Willke had a ready answer: the pro-life movement would win its argument only if it confronted the public with the full horror of what abortion really entailed.”

And so the “Precious Feet” impacted future generations, bringing to light the truth: that abortion kills very real human beings.

“This remarkable little pin has been responsible for countless people changing their minds on abortion,” the Willkes wrote of the pin, created by the Evers family — an iconic symbol of the pro-life movement and what we are fighting for.