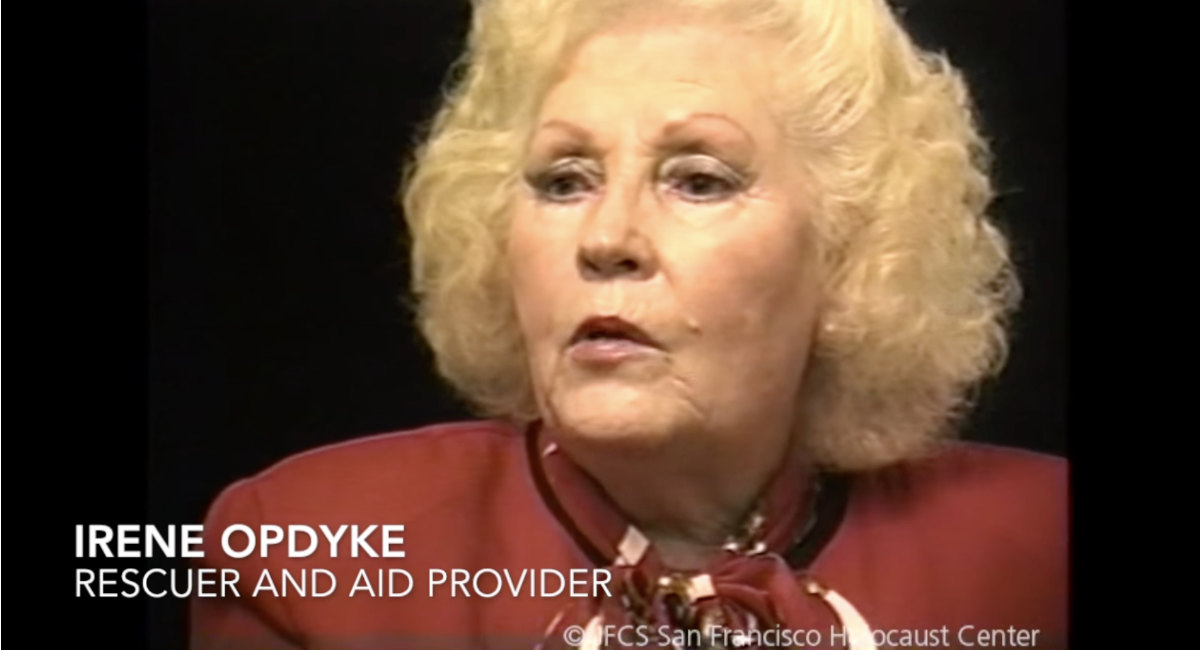 Irena (“Irene”) Gut Opdyke is a name largely lost to history, despite her heroic efforts to save lives during the Holocaust. But a new feature by NBC News is making sure more people know the courageous woman’s story.

Born in Poland to a Catholic family, Opdyke began her adult life by enrolling in nursing school in 1939, when the Nazis and Germans together invaded her home country. Yet she was more than just a nursing student; she was also a member of the Polish resistance, which had life-altering consequences. Caught alone by a group of Russian soldiers, Opdyke was gang-raped and left for dead. After recovering, she was sentenced to hard labor at the young age of 19.

One day, she fainted at the feet of Eduard Rugemer, a Nazi officer. He took pity on her, and arranged for her to be placed in an easier job, working in the mess hall serving Nazi troops. She used that opportunity to smuggle food to the Tarnopol Ghetto.

But there was still no escaping the brutality of the Nazi regime; Opdyke was horrified when she witnessed a Nazi officer shoot an infant in cold blood in 1942, saying in a 2001 interview that it was “something you can never forget.”

Working in the mess hall, serving food and drinks to Nazi troops, she learned that Jewish residents were set to be rounded up and killed, which fortunately came at the same time as an opportunity that was presented to her: Rugemer wanted her to be his housekeeper. Opdyke quickly agreed.

The villa where Rugemer would be living had a secret tunnel leading to the basement, which Opdyke used to smuggle 12 Jews into the home. After Rugemer left for work, Opdyke allowed the secret occupants to come out, where they would help cook and keep the house clean. “They were like mice in a cheese shop guarded by a sleeping cat,” Opdyke wrote in her book.

Two of the people Opdyke was hiding were Ida and Lazar Haller, and the couple panicked when they realized Ida was pregnant. Fearing that a crying baby would put them all at risk, they begged Opdyke, with her nursing experience, to commit an abortion. She refused, and convinced them to keep their baby. That baby is now 77-year-old Roman Haller, one of 13 lives Opdyke helped to save at the young age of 20.

“Irena Gut [Opdyke] is like a second mother to me,” Haller said in a phone interview to NBC News. “Without her, I wouldn’t be alive.”

Opdyke managed to keep everyone safe for a while, yet one day nearly turned disastrous. She was in the town square when Nazis brutally murdered an entire family, including two children. It upset her so much that she forgot to lock the door when she returned, and Rugemer walked in to see two Jewish women standing in his kitchen. Opdyke quickly fled after him, begging for mercy, but he left. When he returned later, he agreed not to turn in the Jews in his home — but only so long as Opdyke would become his mistress — something she described as “worse than rape.”

“I knew I had to bear this shame alone. I could never tell my friends how I had bought their safety,” she wrote. “Their honor would never allow them to hold me to this bargain.”

Eventually, the Nazi regime began to fall, and Rugemer prepared to flee. Opdyke arranged for her 12 refugees to flee into the forest, with Rugemer’s consent. They would wait out the war there, in camps made by Polish resistance fighters, and it was there — in the forest — that Roman Haller was born.

For Haller, his story with the Holocaust didn’t end in those Polish woods. Rugemer, the Nazi, later returned to his wife and children in Nuremberg after the war was over, but they rejected him — not for being a Nazi, but because he had knowingly harbored Jews in his home.

Haller’s parents tracked Rugemer down, and — astoundingly — invited him to live in their home. Haller grew up calling him “zaide,” a Yiddish term for “grandpa.” Haller said that Rugemer became very dear to him.

After the war, Opdyke married and moved to the United States, and didn’t talk about her experience. But when she was confronted by a Holocaust denier, she knew she needed to speak up.

“My mother got very emotional,” Opdyke’s daughter, Jeannie Opdyke Smith, told NBC News. “When she hung up the phone, she said she had allowed evil to win because she kept silent. That if people who knew better didn’t start speaking out, history would repeat itself.”

Eventually, Opdyke wrote a book, and was honored in 1982 by Yad Vashem as one of the Righteous Among the Nations.

Greg Schneider, executive vice president of the Claims Conference, which secures compensation for Holocaust survivors around the world, told NBC News he wanted Opdyke’s story told on this year’s International Holocaust Remembrance Day so people would know how one person could make a difference.

“One of the things we’re trying to convey is the power of the individual — that one person can make a difference,” he said. “In Jewish tradition, there’s a teaching, ‘If you save one life, it’s as if you’ve saved the whole world.’ These stories are perfect examples of that.”