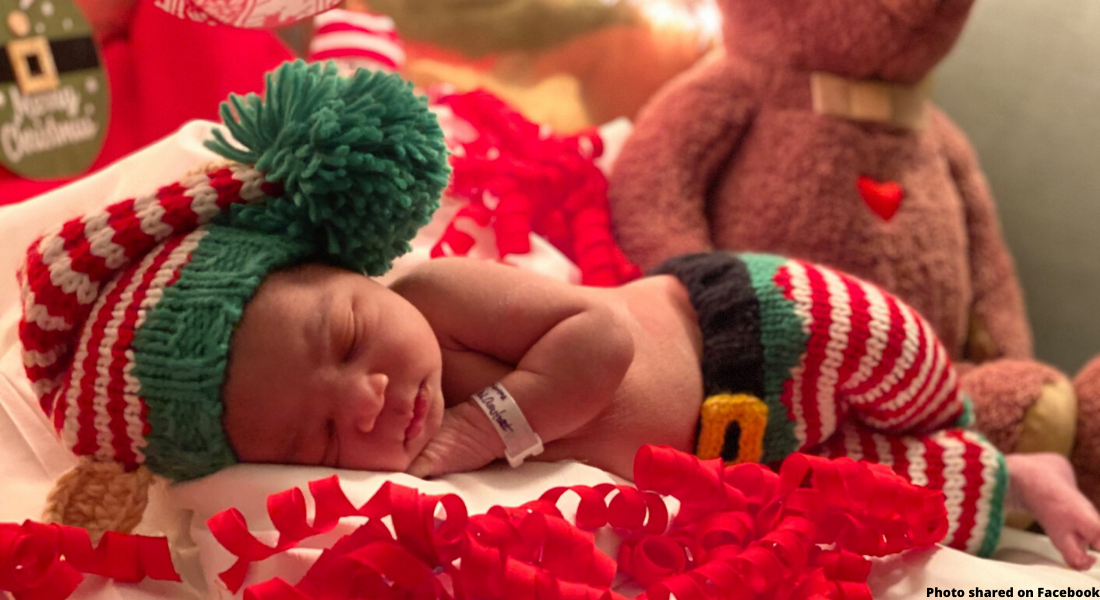 No one wants to spend Christmas at a hospital — yet for families across the country, that’s their reality. In the neonatal intensive care unit (NICU), a hospital’s youngest patients fight for their lives, which can be especially difficult and trying for new parents, who should be at home celebrating the holidays instead of facing stress as they watch their children try to survive. Still, hospital staff and volunteers across the country do all they can to make sure families are able to get into the holiday spirit the best they can.

At WellStar Atlanta Medical Center, 10 babies were decked out in adorable Christmas get-ups, and the post quickly went viral. “Our NICU nurses dressed babies in holiday sweaters, bows, dresses and stockings,” the hospital told 11Alive. “Nurse Terri Gonzales took photos. We posted on social media, and it has gone viral.”

Clark Memorial Health in Indiana also celebrated the holidays with their NICU babies, posing them in front of a sign that read, “Miracles come in small packages.”

Merry Christmas and Happy Holidays from the beautiful babies in our NICU! 😍Moms and babies who need special care stay…

The Louisville, Kentucky, NICU at Baptist Health got a special visit from Santa Claus himself, while also getting the babies dressed for the occasion. Bella Baby Photography also took photos for the families to enjoy. “It means a lot that they actually care to let us have Santa since we can’t go home and have Santa,” Kelsey, a mother with a baby in the NICU, told WLKY. “I am just excited and happy about it.”


Helen DeVos Children’s Hospital in Michigan also saw St. Nick stop by, with Santa photos provided to the parents. “I really want a picture with Santa for her first Christmas,” mom Alexis Carter-Cook said in the hospital’s story about the event. “I think it’s amazing that people would do that for the children. It’s so nice people have such holiday spirit.”

Her daughter, Mi’Asia Merriweather, was born almost two months early, and despite being bundled with tubes and wires everywhere, Santa knew perfectly how to safely hold her. That’s because he was played by retired neonatologist Dr. Craig Kinney. “This is the best Christmas present ever,” Carter-Cook said of her daughter.

Our tiniest patients in the NICU got a visit from Santa today. Pictured here, Santa is holding 2-day-old triplets….

In south Florida, Kendall Regional Medical Center dressed their preemies in Christmas outfits, and also worked with partners in the community, including a local theater company, to put on a festive event with Santa Claus and his elves.

Here at Kendall Regional, we partner with the community to give back to our patients during the holidays. Thank you to…

Monroe Carell Jr. Children’s Hospital at Vanderbilt in Tennessee also had a special visitor: none other than Kris Kringle himself in their annual Christmas event.

SHHHH! Santa made a quick visit to our NICU before his big week. This annual visit is always a favorite holiday tradition at our hospital.

In Pennsylvania, patients at Wellspan Summit Health not only got to see Santa… they got to see Buddy the Elf, too! This annual tradition is extra special, as president and CEO Patrick O’Donnell himself dons the red suit each year. “Having a new baby who is hospitalized over the holidays is difficult for families who are eager to share holiday traditions at home with their babies and loved ones,” O’Donnell told the Herald-Mail Media. “It is our hope we can help spread some cheer during an otherwise difficult time.”

There are countless other examples across the country of hospitals celebrating the holidays in the NICUs, with ongoing efforts to make the NICU more family-friendly, and a less stressful, intimidating place for families to be. This also is happening as premature babies are able to survive at younger and younger ages, especially if they’re given active care.

This kind of extra effort makes a big difference, helping ease the difficulties of being in the NICU and spending holidays away from home — even if just for one day.