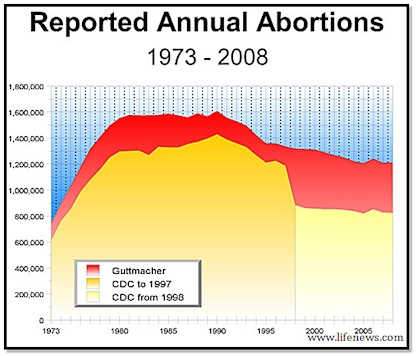 A change in heart and attitude.

I can imagine that there are several days in history when God weeps uncontrollably over the mounting manifestation of evil on Earth – days when a classroom of children are brutally murdered, when someone takes his own life; when innocence is stolen and trampled on, when people fail to see and truly believe in His love.

Roe v. Wade set the precedent for abortion in America, making it perfectly legal to have an abortion during any stage of pregnancy. As a result, 54 million people are missing from the current generation – and, therefore, 54 million chances to love, succeed, fail, learn, laugh, cry, and live were stolen before they fully developed in this country alone. We’ve seen abortion rates skyrocket since this landmark legislation, and organizations like Planned Parenthood flourish to the point where an abortion is performed approximately every 30 seconds in America.

However, Time magazine recently released an article covering the issue and reporting hope for unborn children in America. This country has experienced a turn in the tide; abortion activists have been “losing ever since.” Roe v. Wade. Key figures in the pro-life movement have uncovered the corruption surrounding abortion advocates, forcing many clinics to close. Gallup reports that Americans who consider themselves “pro-choice” hits an all-time low at 41% last year, whereas before 2011, at least half of Americans have claimed to be “pro-choice.” Though this year the numbers shifted back to 48% pro-choice/44% pro-life, we at least saw that a turn in the tide is possible.

Twenty-thirteen will prove to be an interesting year, because it isn’t an election year like 2012, which may have affected poll results. Crisis pregnancy centers have been opening up across the country to provide women with a different choice. After 40 years of work, the movement is growing, not shrinking. Those fighting for life are fighting harder and arguing better. This movement is here to stay until our law starts to protect the vulnerable ones most in need of its fortification.

Deep down, the human psyche knows what is living and what is just a mass of tissue. The recognition is not the problem; shame and outside circumstances are behind unborn babies’ murders. The issue is less of a political issue than it’s been made into; it’s a compromise we’ve witnessed in society unlike any other. The act of murder is the most severe crime in Western society, yet in one particular case, it’s not. By making exceptions, we are affirming that one life is more valuable than another, that one life doesn’t deserve facilitation because it may not be as stable. We are refusing to believe that good can come out of bad circumstances, and yet the most vibrant, impactful, and miraculous stories come from particularly dire situations. When a society comes to the place where people choose which innocent baby lives and which dies, morality crumbles within that society.

So while we are tirelessly praying and working and fighting, we must take heart and understand the impact that the pro-life movement is having in America; even Time magazine can’t deny the shift in general opinion. However, a shift of opinion is not enough; actions must reflect opinion, or opinions mean nothing. The law must reflect this shift of opinion, and societal norms must reflect a change in heart and attitude.