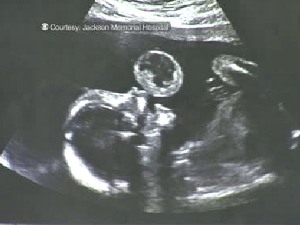 Some people suggest abortion as an alternative to giving birth to a child with a birth defect. While even children with defects should be given a chance to live, advances in medicine show that some birth defects or conditions can be fixed in utero.

Dr. Quintero has an impressive resume when it comes to surgeries performed on the unborn. As a doctor for the Jackson Memorial Hospital in Florida, he has made many advances to correct birth defects before a child is born. He was instrumental in developing a surgery to fix twin-twin transfusion syndrome.

Recently CBS Miami released an article giving Dr. Quintero the credit for removing a tumor from the mouth of an unborn child. When a tumor the size of a tennis ball was found during an ultrasound of Tammy Gonzalez, the diagnosis was not good. According to CBS Miami, “Doctors told Tammy there was little chance her daughter would survive birth – and if she did, she would require an immediate tracheotomy in order to breath [sic] and have multiple surgeries thereafter.” In the face of this devastating news, Tammy sought the assistance of Dr. Quintero.

Tammy was seventeen weeks pregnant when the surgery was performed. She watched as the doctors skillfully guided their instruments to remove the tumor. According to Tammy, “I could see it floating down. It was like this huge weight had been lifted off. It just floated away and I could see her face.”

Tammy later gave birth to a healthy baby girl, Lyna Gonzalez. A small scar on Lyna’s mouth is the only outward sign of the surgery. Lyna, now twenty months old, is still a healthy, normal child.

The July 2012 issue of the American Journal of Obstetrics and Gynecology published a report of this surgery in which the authors of the report state that to their knowledge, it is the first successful surgery of its kind. While the report acknowledges that this particular medical condition is rare, a successful surgery like this may open the door for other surgeries conducted on the unborn to fix defects or conditions.