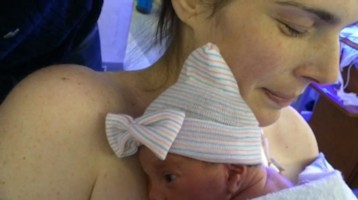 Last month, Elizabeth Joice, a strong woman, beautiful wife, and courageous mother, died after a roller coaster ride with cancer, leaving behind her husband and beautiful newborn daughter. Joice began an arduous regimen of cancer treatments after learning that she had a malignant tumor in 2010. It took surgery and four rounds of chemotherapy, but she beat the cancer – and predictions that she would not be able to get pregnant after treatment. Last year, the couple received the hoped-for news that they were pregnant, and shortly thereafter the dreaded news that Elizabeth’s cancer had returned.

Elizabeth had to choose among ending the baby’s life, endangering it with aggressive cancer treatments, or foregoing treatment for the duration of the pregnancy in order to nurture her baby and give her a chance at being born healthy. Elizabeth chose to postpone treatment, knowing that doing so could have devastating effects on her ability to beat cancer a second time around.

Baby Lily was due this past March, but doctors delivered her a few weeks early in order to begin treating Elizabeth as early as possible. In January, Lily was born, and Joice began the long-awaited round of treatment. But the cancer had spread too far by that point, and it was too late. Elizabeth spent a few precious weeks with her daughter before dying on March 9.

This video is a collection of memories of Elizabeth. It chronicles Elizabeth’s last days on earth, and Lily’s first days outside the womb.