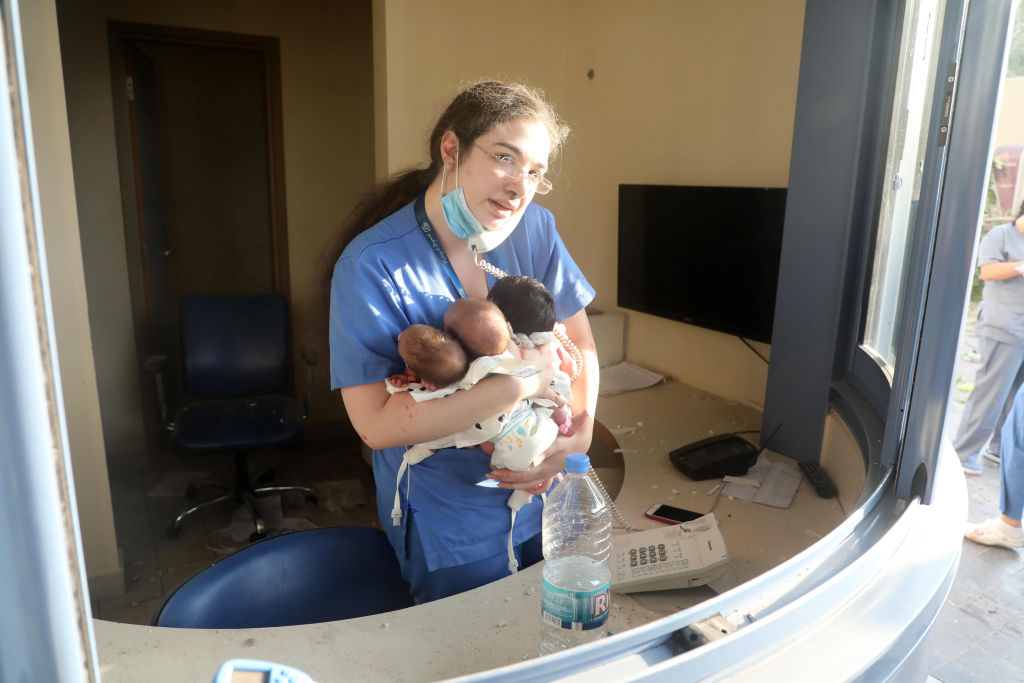 On Tuesday, an estimated 2,750 metric tons of ammonium nitrate detonated in Beirut inside a warehouse, with a shock wave tearing through buildings up to six miles away, killing hundreds and injuring thousands. One of the places affected by the blast was Al Roum hospital in the Ashrafieh district. While tragically, nearly 20 people died, the heroic actions of one quick-thinking nurse saved the lives of three newborns.

Photojournalist Bilal Jawich was at home when the explosion hit, and quickly made his way into the city. “I followed the smoke until I reached the port of Beirut,” he told CNN. That was when Jawich saw the nurse, amid several dead and injured victims of the explosion. “I was amazed when I saw the nurse holding three newborns,” he said. “I noticed the nurse’s calm, which contrasted the surrounding atmosphere just one meter away.”

Despite the horror of her surroundings, Jawich said the nurse “looked like she possessed a hidden force that gave her self-control and the ability to save those children,” he explained. “People stand out amidst these violent and dark and evil circumstances and this nurse was up to the task.”

When Jawich was able to talk to the nurse later, she told him she had been working in a maternity ward when the blast hit, and was knocked unconscious. But when she regained consciousness, she tended to the three babies, all while getting back to work. Even as the electricity and communication went out, she kept working, calling for additional help and keeping at her job, all while “holding three newborn babies and surrounded by dozens of bodies and wounded.”

Jawich also posted about the experience on Facebook alongside the now-famous photo. “16 years of press photography and lots of wars,” he wrote. “I can say I didn’t see what I saw today in Ashrafia area, especially in front of the rum hospital and this ‘heroine’ caught me inside the hospital and was accelerating to call despite the suspension of communication holding three newborn babies and surrounded by dozens of bodies and wounded.”

Hospitals in Beirut were already crowded due to the COVID-19 pandemic, and with the extra influx of injuries, medical facilities have been pushed past their breaking point. As death and destruction rages, this inspirational photo of the courageous, life-saving actions of this still-unnamed nurse have given people across the world hope, which is needed so badly right now.