It’s not exactly a secret: most people are not fans of abortion. Even if they believe it should be legal (albeit often under limited circumstances), most Americans still think it is morally wrong. As our knowledge of embryology and fetal development advances, it becomes harder and harder to convince people that abortions should take place. After all, no one wants to publicly support taking the lives of innocent, preborn children. So what is the abortion industry to do?

“Fetus”; “Choice”; “Autonomy”; “Reproductive rights/Reproductive Health; “Fake clinics” (women helping centers); “Essentially a miscarriage” (chemical abortions); “inflammatory descriptions” (explaining what happens in a dismemberment abortion), and so on and so on.

All of these descriptors are intended to distance the listener from what is being done and to whom. A “fetus” vaguely reminds you of something you read in a high school Latin class text. By start contrast an unborn baby is not an abstraction but somebody you can identify with.

And, of course, this is the linchpin of all pro-abortion rhetoric, from the most primitive to the stealthiest. You should only talk about the mother/her choice/her autonomy etc. because there really is no other party. Just a “product of conception,” undifferentiated masses of “uterine matter.”

This isn’t just pro-life bluster; this is how the industry operates. Planned Parenthood is more concerned about selling abortion through any means necessary than they are concerned with being honest and truthful, so they try to pretty it up with euphemisms.

There are numerous examples. Carol Everett formerly owned two abortion facilities and explained how staffers who were too honest had to go.

“An immediate problem concerned Barbara, [a] young medical assistant who did not like abortions,” Everett recalled. “She actually had a fetal development book in the clinic and often showed women how developed their babies were at various stages inside the womb. I stopped that practice immediately. Although Barbara was a good employee, if she could not sell abortions, she had to go.”

A former Planned Parenthood staffer likewise explained how they were trained not to say the word baby.

“Women were not counseled about their options,” she said. “They weren’t given any information about fetal development and if they asked any questions, we lied to them. We spent very little time with them as we were told to get them into the abortion room quickly. We were told not to say the words abortion, fetus, baby or embryo. We told women the doctor would gently extract the contents of their uterus.”

Multiple women have likewise testified that they were lied to by the abortion industry. An undercover Live Action investigation showed just how widespread medical misinformation in the industry is.

While the abortion industry tries at all costs to hide the reality of abortion, the truth always comes out. On their website, for example, Planned Parenthood is incredibly deceptive about abortion and what it entails. Actual abortion procedures are much uglier than what Planned Parenthood wants the women they prey on to know about.

Consider how they describe a dilation and evacuation, or D&E, abortion: 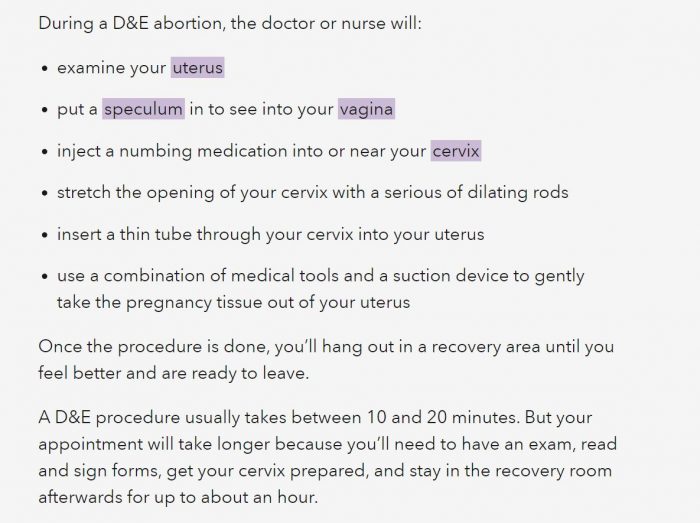 An actual D&E procedure is rather different, as former abortionist Dr. Anthony Levatino explains in the video below:

It isn’t a “gentle” procedure; the preborn child is literally torn apart limb by limb. And Planned Parenthood completely ignores any potential complications as well, which can include hemorrhage, uterine and cervical perforation and laceration, and scar tissue. The trauma to the cervix and uterus can also make future pregnancies more dangerous.

If abortion is something so good, so positive, then why does the industry go to such lengths to lie about it? Why the deception and secrecy? It’s because deep down, people realize that it is inherently bad. Even abortionists understand that they are taking lives. Abortion is shameful and terrible, and the only way for it to continue is through lies.