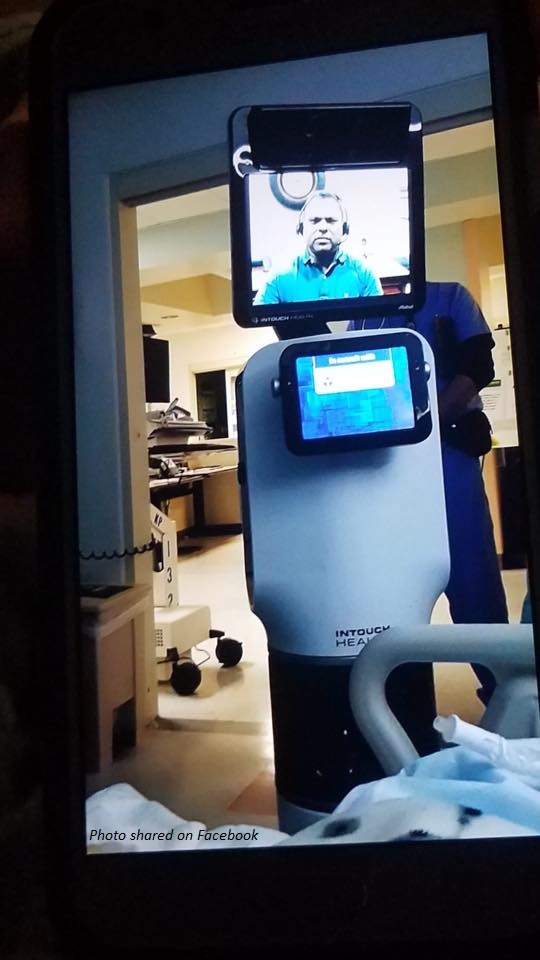 Ernest Quintana knew he was dying of a chronic lung disease when he was brought into the hospital for difficulty breathing. However, it was with shock that the family learned the worst news possible: there was nothing else that could be done for him this time, no health care available, other than hospice care. Quintana would soon die. The shock came not only from this difficult news, but the manner in which it was delivered: from a live-stream with a doctor over a remote care robot.

Ernest Quintana was hard of hearing, and the robot was unable to reach the other side of the bed where Quintana could best hear. His granddaughter, Annalisia Wilharm, was with him in the room and had to repeat the bad news to her grandfather. “So he’s saying that maybe your next step is going to hospice at home,” Wilharm is heard saying in a video she recorded of the visit. “You know, I don’t know if he’s going to get home,” replies the doctor.

Telemedicine is a growing practice that expands access to health care, including specialists, in areas where they might not otherwise be available. But Catherine said she thought it was misused in their case. “I don’t think it belongs in an ICU, I don’t think it belongs to critical patients that are going to die. It’s not meant for that, it’s meant for more casual medical information,” she told CBS San Francisco.

Quintana died two days after the delivery of this news.

His family is furious at the insensitivity shown to the dying man. The hospital, Kaiser Permanente Medical in Fremont, CA, is defending the action. A spokesperson said in a statement:

We offer our sincere condolences. […] In every aspect of our care, and especially when communicating difficult information, we do so with compassion in a personal manner. The use of the term “robot” is inaccurate and inappropriate. This secure video technology is a live conversation with a physician using tele-video technology, and always with a nurse or other physician in the room to explain the purpose and function of the technology. […] Our physicians and nurses were in regular, in-person communication with the patient and family about his condition from the moment he entered our hospital. The evening video tele-visit was a follow-up to earlier physician visits – it did not replace previous conversations with patient and family members and was not used in the delivery of the initial diagnosis.

Kaiser said they are still learning how to use the remote technology when interacting with patients, and will use this experience to improve. But is such an impersonal interaction with a dying patient really the best example of cutting-edge health care?