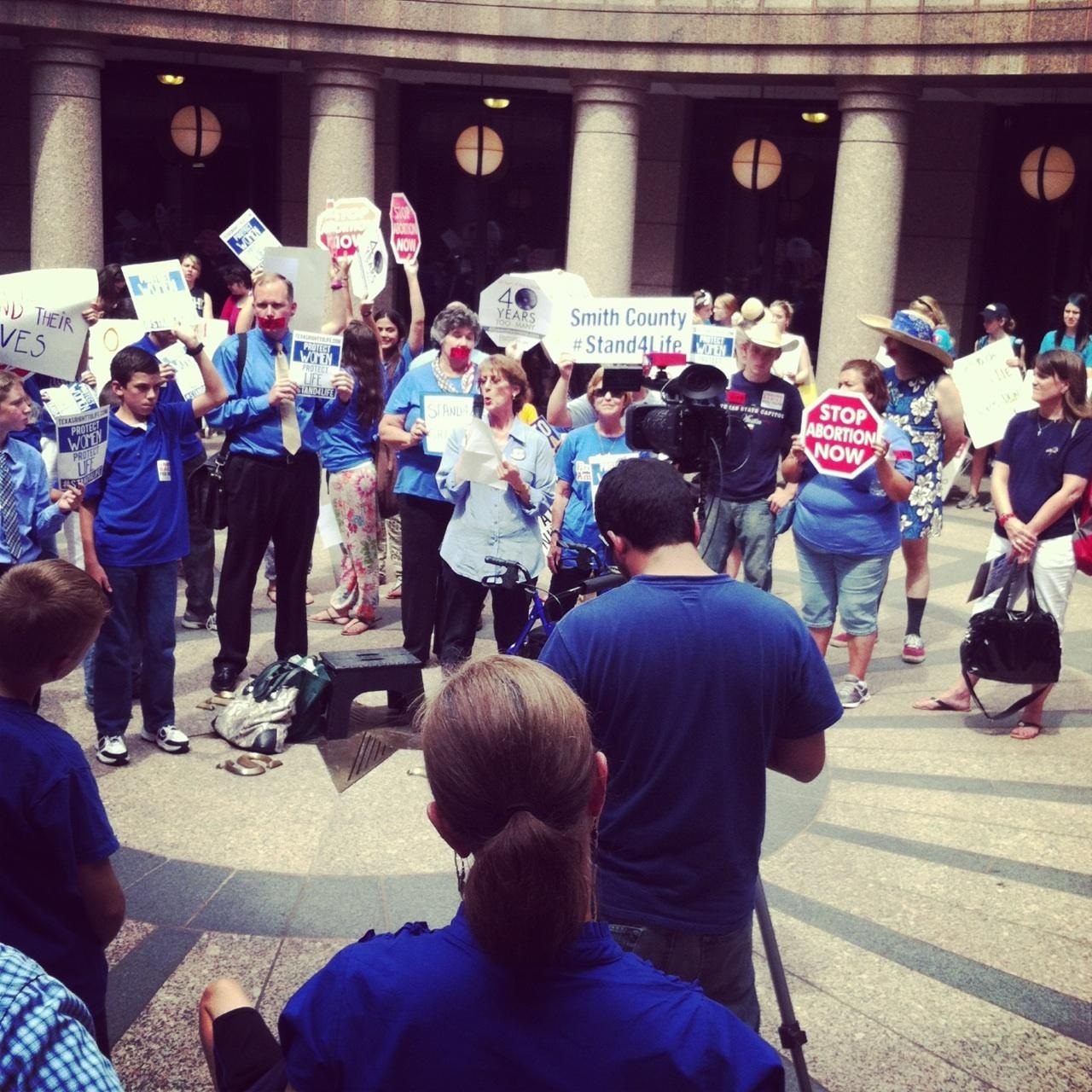 It took a whole second session, but the pro-life bill, HB2, has finally passed the Senate by a 19-11 vote and now heads to Governor Rick Perry to sign. This is certainly good news for the women and unborn children of Texas. The pro-life legislatures are to be commended, but so are the courageous pro-lifers who had to deal with pro-abortion advocates at the Texas Capitol.

On the day when the bill was heard and passed by the Senate, the less-than-peaceful activities from pro-aborts gathered at the capitol building added up. Following the passing of the bill, pro-lifers, feeling threatened by pro-aborts, were forced to hide out in congressional offices and other safe, undisclosed locations. But the vulgar and outright illegal activities from the other side began earlier in the day.

Such behavior from pro-abortion advocates suggests their fear of the inevitability of this bill passing. The higher-ups in the abortion movement no longer bothered encouraging their supporters to act appropriately, though it is questionable as to if they ever did. Abby Johnson, who was present at the Capitol, has been making updates on her Facebook page and posted this the day before the bill passed:

I just wanted to post something in preparation for tomorrow. I have had a couple of legitimately concerned abortion clinic workers (from Austin clinics) contact me to let me know what is being planned for tomorrow. Both Planned Parenthood and NARAL are no longer encouraging their supporters to be civil and courteous. These workers are telling me that many are planning on getting arrested and being aggressive with prolifers (including physical contact because they don’t think we will press charges)…

And sure enough, a pro-abortion advocate assaulted a student with Students for Life of America. Despite what the pro-aborts may think, charges are likely going to be pressed.

These people cannot stand not having their way and so have to interrupt those who disagree with them. In doing so, though, they disrupt the democratic process. They did so by bringing in jars of urine and feces as well as bricks, condoms, pads, and tampons to throw at legislators. Some were also planning to show off their “lady parts.” Fortunately, police officers were able to stop these plans. They also stopped a person outside with a semi-automatic weapon, according to posts from Abby Johnson and others who were at the Capitol. A few others were arrested but caused a further scene in padlocking themselves to the railing, covered in red paint to represent blood, according to Abby Johnson.

For those who were there or have even just read of the actions of pro-abortion advocates, such behavior could very well be described as disturbing, or even demonic and evil. Abby Johnson felt such actions to be evil and in Facebook posts has described abortion advocates as “angry and hurting.” She referenced being “in the middle of an extreme spiritual battle[.]” She also posted a video with the caption “this is what evil sounds like.” Bryan Kemper of Stand True Outreach posted a similar video, which is longer and even more chilling. Brad Mattes, Executive Director of Life Issues Institute, has an article up on LifeSiteNews.com, where he described what he saw as “an epic battle between good and evil.”

And it is indeed true evil that these people support at such length. As comments for the videos have expressed, there very much seems to be a connection with demons and Hell, as this evil comes from this spiritual battle Abby Johnson is referring to.

But despite the danger and unpleasantness, let us thank God for the passing of HB2 and for the courageous pro-lifers and legislatures. The movement has fought bravely and prevailed. Let us pray for them and for Texas now.