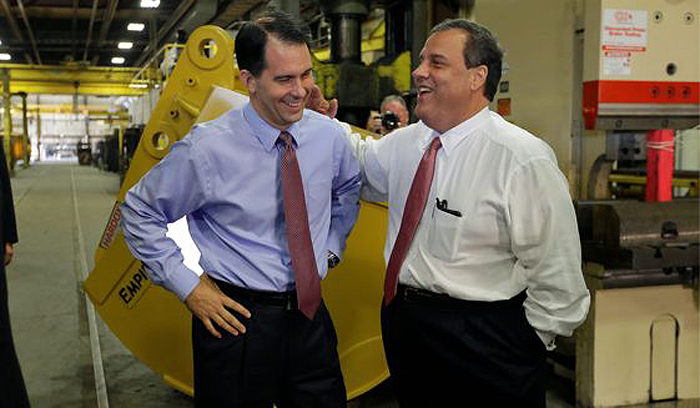 To date, twelve states have launched investigations into their Planned Parenthood affiliates to determine if they are engaged in the kinds of illegal fetal organ harvesting practices exposed by the Center for Medical Progress: Arizona, Florida, Georgia, Indiana, Kansas, Iowa, Louisiana, Massachusetts, Missouri, Ohio, South Carolina, Tennessee, and Texas — a cause that only increases in urgency with each new video, the latest of which suggests they may be murdering babies after birth.

All of the major Republican presidential candidates are pro-life, all have denounced Planned Parenthood over the scandal, and most have demanded that the abortion giant be defunded and nationally investigated.

However, looking over the field, a curious detail seems to have gone unmentioned for too long. Four of the GOP candidates are sitting governors — John Kasich of Ohio, Bobby Jindal of Louisiana, Scott Walker of Wisconsin, and Chris Christie of New Jersey. Yet investigations have not been launched in the latter two states.

What’s going on here? Christie, a former federal prosecutor, says possible criminal charges are “certainly worthy of inquiry.” Walker calls it “a disturbing, disgusting act” worthy of being outlawed. So what are you waiting for, guys? First off, it’s worth noting that state attorneys general are elected positions independent of the governor in Louisiana, Ohio, and Wisconsin, but gubernatorial appointees in New Jersey, and that the leaders of LA, NJ, OH, and WI’s health departments are all appointed by their governors. In Ohio, it was the AG who launched the investigation, which Kasich endorsed, whereas Jindal ordered health officials to spearhead efforts. Jindal has taken the added step of ending his state’s Medicaid contract with Planned Parenthood. Kasich has so far refused to do so, demonstrating his own lackluster pro-life credentials.

Both Christie and Walker have more than enough authority to begin investigations — through both the Health and Justice Departments in the former’s case. Walker can’t technically order Attorney General Brad Schimel to investigate, but Schimel is a fellow Republican, and so should be generally aligned with his values and priorities (and again, there’s still the health avenue, too).

Lawmakers in both states certainly want it to happen — last month, Wisconsin State Senator Duey Strobel announced he was “immediately calling for the Secretary of the Department of Health Services Kitty Rhoades, Governor Walker,” and willing legislators to investigate. New Jersey State Senator Joe Pennacchio called on his state’s Attorney General’s Office to do so, as well.

Both men have been talking tough on the campaign trail about holding Planned Parenthood accountable for their actions, with Christie declaring that “we as a party can not shy away from this fight” and Walker (misleadingly) boasting to have “defunded Planned Parenthood […] long before any of these videos came out.” But even as they seek promotion to the most powerful office in the land, they haven’t yet marshaled their current power to do all they could be doing to protect life and bring these murderers to justice.

Again, for context, we just learned of allegations that these people think it’s “kinda cool, kinda neat” to restart and stop their victims’ hearts. That they deliver babies and then kill them. That they slice their faces open to extract their brains.

If you think that words and promises are not enough, that New Jersey and Wisconsin should join the ranks of states investigating Planned Parenthood’s activities in their own backyards, you can let their governors know by contacting them here: