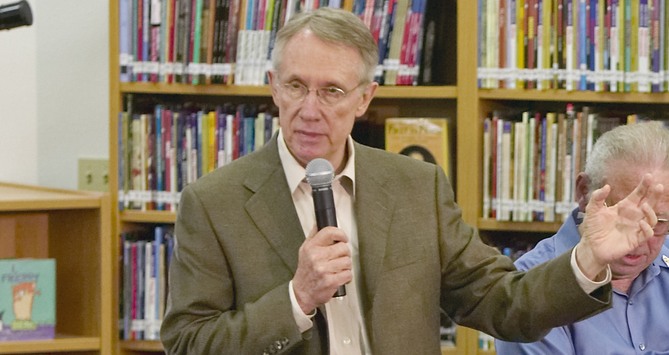 What does it mean to be “pro-life”? The label’s definition is open to debate. However, most people would agree it doesn’t include sabotaging a bill to protect human trafficking victims simply because the legislation won’t pay for more abortions. Harry Reid isn’t most people.

Senate Minority Leader Harry Reid has long claimed to have pro-life convictions. In 2009, a spokesman declared that the senator was “strongly pro-life” and that “his voting record speaks for itself.” It’s certainly true that Senator Reid’s recent record has been speaking volumes; what it’s been saying is anything but pro-life. While typically associated with other countries, human trafficking exists in this one, too. Kevin D. Williamson recently wrote about Ima Matul, an Indonesian teen who was lured to Southern California. Upon arrival, she was forced into a life of brutal captivity.

Ima’s story is far from unique. To help others like her, Sen. John Cornyn (R-TX) introduced the Justice for Victims of Trafficking Act. If passed, it would increase the penalties for traffickers while using seized assets to help their victims. Unfortunately, Harry Reid and most of his fellow Senate Democrats have kept that from happening.

They’re upset because the bill doesn’t allow money taken from convicted traffickers to pay for abortion. The rule makes sense, given how the legislation is aimed at helping the victims of trafficking, not killing them. After all, no one should be put to death for her father’s crimes.

Not that preborn lives are the only ones at stake, as studies have shown women who undergo abortions are at a higher risk of suicide. Meanwhile, others are left tortured by feelings of sadness and loss. This isn’t the sort of outcome the government needs to be promoting, particularly among women and girls who’ve already been traumatized.

The fact that Senator Reid is blocking a bill to fight human trafficking is shocking. That he’s only doing so because it won’t fund more abortions shows just how bad Reid’s understanding of the term “pro-life” really is (his 92 percent approval rating from Planned Parenthood is another clue). It’s time for pro-lifers to offer some correction.