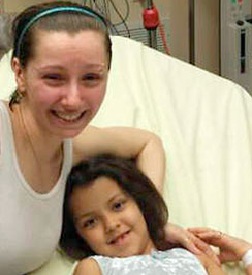 Rather than reject, revile, and abandon, Amanda Berry chose instead to protect, love, and defend.

Recently, Americans have been barraged with the grisly images from the trial of late-term abortion doctor Kermit Gosnell. There’s been talk of morning-after pills for 15-year-old girls, Obama bestowing blessings on Planned Parenthood, and the defense of leaving born-alive babies to die without medical care. Then, out of nowhere, kidnap victim Amanda Berry emerged, exhibiting the unconditional love of a mother toward a small child who, pro-choicers would argue, based on who sired her, deserved to die.

Amanda Berry is one of three women; the others are Gina DeJesus and Michelle Knight. All of them were offered rides and then held captive in Cleveland, Ohio by Ariel Castro, an ex-bus driver with a history of domestic abuse.

At 17 years of age, Berry called her sister to let her know she was getting a ride home from her job at Burger King – and then was not seen again for a decade. Together with Gina and Michelle, Amanda was held captive inside a house of terror where she and they were bound with chains and ropes, confined to the basement and other closet-sized rooms, beaten, starved, and repeatedly raped.

Over those 10 years, there were six pregnancies. As a result of physical abuse and malnourishment, five of pregnancies ended in miscarriage. But Amanda’s baby somehow survived.

If ever there was a woman with a reason to want to dispose of a child in order to rid herself of the living reminder of her abuser, Amanda is that woman. Instead, six years ago, on Christmas Day, inside the squalid home at 2207 Seymour Avenue, Amanda Berry delivered her daughter in an inflatable child-size swimming pool set up inside the house.

Although rape-related abortions made up only 2% of the total number of pregnancy terminations performed in 2011, women who kill children conceived from rape likely do so to flush any trace of their attacker from their bodies. Killing a child conceived as a result of rape is the ultimate act of hostility by a woman toward the person who forcibly impregnated her. Hopeless and helpless against an aggressor, innocent unborn babies are sacrificed by mothers who violently attempt to gain back the control that was lost when they were violated.

Amanda Berry has proven that such thinking is terribly misguided, because from the looks of things, the child who just happened to be the offspring of Berry’s assailant may very well have given Amanda the will to find a way to break free.

For six years after Jocelyn was born, Amanda did not give up looking for a way to escape. A neighbor’s sister said that years back she saw a “woman and baby standing in a window after hearing pounding. The window was partially covered with a plank.” The police were called as they had been before, but again, nothing happened. Why law enforcement didn’t investigate further is unclear, but what is clear is that the woman crying for help in the boarded-up window was Amanda, and the baby she cradled in her arms was her daughter Jocelyn.

When Amanda saw an opportunity to escape, she took it.  She broke through a door, but she didn’t bolt from the house alone; she took her child with her. Hours later, her grandmother Fern Gentry asked her granddaughter, “Is the little girl your baby?” Without mentioning rape or Castro, Berry simply replied, “Yeah, she’s my daughter. She was born on Christmas.”

Based on the picture of Amanda, her sister Beth Serrano, and Berry’s daughter Jocelyn taken in a hospital room after their escape, the hostility one would expect to see on the part of a woman toward a child whose father repeatedly raped her for 10 years was absent. Instead, it was clear from the photograph that Amanda Berry cherishes Jocelyn and that the little girl grasping Amanda’s hand loves and trusts her mother.

Judging from the look on Ms. Berry’s face, it was also clear that despite all the abuse and hardship she suffered, she and Jocelyn are survivors. Mother and daughter clearly gained strength from each other and triumphed together over the nightmare of being trapped for years in a hellhole.

Yet ever since the three women escaped, the media’s emphasis has been mainly on the sensational aspect of the kidnapping, cruelty, and bondage. But, like a flower blooming in the desert, out of all the perversion and sadism, the story worth telling is one of the enduring love of a mother for her child. Why? Because rather than do what women who abort children resulting from rape do, which is to reject, revile, and abandon, Amanda Berry chose instead to protect, love, and defend.

Thus, Amanda Berry has emerged from the ordeal a heroine for rescuing her two friends and for enduring a decade of rape, terror, and torture at the hands of a sadistic fiend. But more than that, Berry’s fearlessness is rooted in being a woman strong and wise enough to treasure her baby girl regardless of how she was conceived.

So just as Kermit Gosnell’s barbarism showed the evilness of destroying life, the love of Ms. Berry for her daughter showed the beauty of protecting life. And so, for singlehandedly hamstringing the flawed argument that a child whose life results from rape automatically deserves a death sentence, this Mother’s Day should be officially declared Amanda Berry Day.