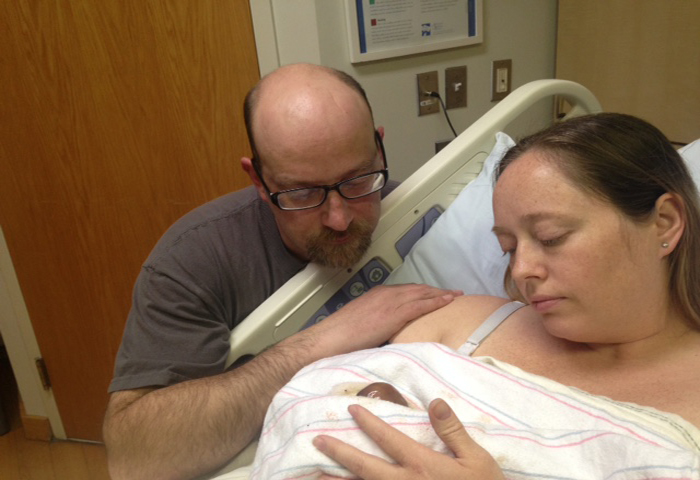 Natasha was completely shocked to find out she was pregnant. The mother of four from Massachusetts was still nursing her youngest son when she realized another child was on its way.

Although the pregnancy was a surprise, Natasha and her husband, Mark, were excited over the idea of having two children so close together. Their youngest son, Benjamin, and their new preborn baby would be just 21 months apart. The couple was grateful for another addition to their beautiful family. That year for Natasha’s birthday, Mark arranged for her to have a 3D gender ultrasound. The pregnancy was going well and they were eager to see their baby on the ultrasound screen. What should have been a celebratory appointment took a drastic turn when the tech couldn’t find the baby’s heartbeat. The couple was devastated when they went to the hospital and received the same grim results.

They followed up with their midwife who suggested Natasha set up an appointment for a D&E. Natasha refused the procedure because in her own words, she knew it was what was used to “pull babies apart during an abortion. ”

As she told me during our interview, “I told her that I didn’t want one— that I wanted to deliver and hold my baby. She tried to talk me out of it, saying that it’s too early, basically, that I wouldn’t want to see him and he wouldn’t look like a baby. I knew that I did want to see him, that I needed to. I needed to hold him and make memories of him the only way that I could.”

On the morning of March 27, Mark took Natasha to the hospital. By evening, the baby was born. They named him Isaiah, which means the Lord is my salvation. Natasha was so grateful for the hours she and her husband had to hold Isaiah, and cry over him.

The painful loss of a child is a loss like no other. For Natasha and Mark, the loss of Isaiah at 18 weeks was not the first loss their family suffered. In 2009, they lost identical twin girls at 18 weeks. The family relies on each other and their faith in Jesus to get them through these difficult times.

Being vulnerable about such a personal loss is not an easy thing. Yet Natasha wanted to not only share her story, but to also share pictures of Isaiah. When I asked her why she wanted to share something so private, she said, “I want to share Isaiah’s pictures because people need to see the humanity in the preborn. He was perfect and loved.” Natasha was willing to share an intimate part of her life in hopes that even one person would recognize the dignity of the preborn. As she said to me, “When I delivered my twins at 18 weeks, I became very passionate and empathetic towards preborn babies. I don’t know how anyone could look at them and say they weren’t a baby or didn’t have value.”

Isaiah passed on March 27th. Natasha told me her family knows they have acceptance and peace because they know Isaiah is with their Savior, and they will be with him one day. Their grief comes in waves, but it’s mainly sadness that Isaiah isn’t with them and they are missing out on his life. My prayer is that Natasha and her family would be comforted in this time. I also hope and pray, along with Natasha, that the story of Isaiah’s life will touch others. Life is a gift that is valuable and beautiful at every stage.