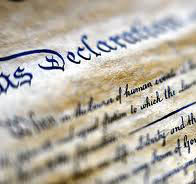 In an earlier post this month, I highlighted the continuity between the eugenics of Planned Parenthood founder Margaret Sanger and the eugenics of Planned Parenthood‘s official mission statement today. Eugenics, literally meaning “well born,” has been described as essentially dividing people into “the fit” and “the unfit.” This idea has a history much older than Margaret Sanger that is worth exploring.

Yesterday, exactly 150 years ago, March 21, 1861, a man named Alexander Stephens gave a provocative speech to a large crowd assembled at the Athenaeum in Savannah, GA. A former U.S. Senator from Georgia, Stephens was at that time the newly-elected Vice President of the newly-formed Confederate States of America. On the eve of the Civil War, in what has come to be known as the “Cornerstone Speech,” Stephens declared that the U.S. Constitution had been founded on the erroneous proposition in the Declaration of Independence that all men were created equal:

But not to be tedious in enumerating the numerous changes for the better, allow me to allude to one other — though last, not least. The new constitution has put at rest, forever, all the agitating questions relating to our peculiar institution — African slavery as it exists amongst us — the proper status of the negro in our form of civilization. This was the immediate cause of the late rupture and present revolution. Jefferson in his forecast, had anticipated this, as the “rock upon which the old Union would split.” He was right. What was conjecture with him, is now a realized fact. But whether he fully comprehended the great truth upon which that rock stood and stands, may be doubted. The prevailing ideas entertained by him and most of the leading statesmen at the time of the formation of the old constitution, were that the enslavement of the African was in violation of the laws of nature; that it was wrong in principle, socially, morally, and politically. It was an evil they knew not well how to deal with, but the general opinion of the men of that day was that, somehow or other in the order of Providence, the institution would be evanescent and pass away. This idea, though not incorporated in the constitution, was the prevailing idea at that time. The constitution, it is true, secured every essential guarantee to the institution while it should last, and hence no argument can be justly urged against the constitutional guarantees thus secured, because of the common sentiment of the day. Those ideas, however, were fundamentally wrong. They rested upon the assumption of the equality of races. This was an error. It was a sandy foundation, and the government built upon it fell when the “storm came and the wind blew.”

Stephens went on to claim that the Declaration, and thus the government founded on it, was in error because science had now proven that blacks and whites were not equal. The new, superior Confederate Constitution was, Stephens said, more enlightened:

Our new government is founded upon exactly the opposite idea; its foundations are laid, its corner- stone rests upon the great truth, that the negro is not equal to the white man; that slavery — subordination to the superior race — is his natural and normal condition. [Applause.] This, our new government, is the first, in the history of the world, based upon this great physical, philosophical, and moral truth. This truth has been slow in the process of its development, like all other truths in the various departments of science. It has been so even amongst us.

Stephens continued at length explaining the scientific superiority of the C.S.A.’s new order:

Many who hear me, perhaps, can recollect well, that this truth was not generally admitted, even within their day. The errors of the past generation still clung to many as late as twenty years ago. Those at the North, who still cling to these errors, with a zeal above knowledge, we justly denominate fanatics. All fanaticism springs from an aberration of the mind — from a defect in reasoning. It is a species of insanity. One of the most striking characteristics of insanity, in many instances, is forming correct conclusions from fancied or erroneous premises; so with the anti-slavery fanatics; their conclusions are right if their premises were. They assume that the negro is equal, and hence conclude that he is entitled to equal privileges and rights with the white man. If their premises were correct, their conclusions would be logical and just — but their premise being wrong, their whole argument fails. I recollect once of having heard a gentleman from one of the northern States, of great power and ability, announce in the House of Representatives, with imposing effect, that we of the South would be compelled, ultimately, to yield upon this subject of slavery, that it was as impossible to war successfully against a principle in politics, as it was in physics or mechanics. That the principle would ultimately prevail. That we, in maintaining slavery as it exists with us, were warring against a principle, a principle founded in nature, the principle of the equality of men. The reply I made to him was, that upon his own grounds, we should, ultimately, succeed, and that he and his associates, in this crusade against our institutions, would ultimately fail. The truth announced, that it was as impossible to war successfully against a principle in politics as it was in physics and mechanics, I admitted; but told him that it was he, and those acting with him, who were warring against a principle. They were attempting to make things equal which the Creator had made unequal.

In the conflict thus far, success has been on our side, complete throughout the length and breadth of the Confederate States. It is upon this, as I have stated, our social fabric is firmly planted; and I cannot permit myself to doubt the ultimate success of a full recognition of this principle throughout the civilized and enlightened world.

As I have stated, the truth of this principle may be slow in development, as all truths are and ever have been, in the various branches of science. It was so with the principles announced by Galileo-it was so with Adam Smith and his principles of political economy. It was so with Harvey, and his theory of the circulation of the blood. It is stated that not a single one of the medical profession, living at the time of the announcement of the truths made by him, admitted them. Now, they are universally acknowledged. May we not, therefore, look with confidence to the ultimate universal acknowledgment of the truths upon which our system rests? It is the first government ever instituted upon the principles in strict conformity to nature, and the ordination of Providence, in furnishing the materials of human society. Many governments have been founded upon the principle of the subordination and serfdom of certain classes of the same race; such were and are in violation of the laws of nature. Our system commits no such violation of nature’s laws. With us, all of the white race, however high or low, rich or poor, are equal in the eye of the law. Not so with the negro. Subordination is his place. He, by nature, or by the curse against Canaan, is fitted for that condition which he occupies in our system. The architect, in the construction of buildings, lays the foundation with the proper material-the granite; then comes the brick or the marble. The substratum of our society is made of the material fitted by nature for it, and by experience we know that it is best, not only for the superior, but for the inferior race, that it should be so.

What was the “science” on which Stephens based his argument? Nothing less than the first great wave of eugenics, which would be in vogue from the mid-19th century well into the first half of the 20th. Dr. Samuel Cartwright, a distinguished American physician who researched fever and cholera, wrote in The New Orleans Medical and Surgical Journal in 1851 that the physiological characteristics of African-Americans made them suited for slavery and inimical to the life of free men. Twenty-two years before “The Cornerstone Speech,” Samuel George Morton described the head shapes and brain sizes of the different “races” in America in his work Crania Americana, ranking whites at the top. Scientists Josiah Nott and George Gliddon, great admirers of Morton, published Types of Mankind or Ethnological Research in 1854, in which they argued that different races of humans had actually evolved from separate animals.

By the 1880s, the science of racial typing and hierarchy had a name–eugenics. The “father of eugenics,” Sir Francis Galton, a cousin of Charles Darwin, was convinced that the elites of society owed their success to their “good birth,” or eu-genics. In 1916, Madison Grant, co-founder of the American Eugenics Society, bemoaned in his seminal book The Passing of the Great Race how

When slavery was abolished and the white man had to plough his own fields or work in the factory deterioration began,

and also disparaged the

granting of citizenship to Negroes and to ever increasing numbers of immigrants of plebeian, servile or Oriental races, who throughout history have shown little capacity to create, organize or even to comprehend Republican institutions.

Grant’s Passing was written in large part to warn against the decline of “the fit” in American society. Margaret Sanger was a long-time, prominent member of Grant’s American Eugenics Society. She herself was disturbed at the composition of the U.S. population, and wrote in 1922 in Pivot of Civilization, her eugenic masterpiece,

[W]e are paying for and even submitting to the dictates of an ever increasing, unceasingly spawning class of human beings who never should have been born at all.

The current of eugenic thought from slaveowners in the U.S. to their scientific defenders to the American eugenics movement and Margaret Sanger is startlingly direct. But where early eugenicists had grand visions of racial hierarchy and social subordination of weaker people to stronger people, Margaret Sanger had a more “final solution”–for Sanger, unlike Stephens or Grant, “the unfit” “never should have been born at all.” As Sanger and her fellow travellers would discover, the most effective ways to prevent “the unfit” from being born were to prevent their coming into existence in the first place–contraception or sterilization–or, if that failed, to kill them before birth–abortion.