Thousands and thousands of dollars.

You’ve seen them all over social networking sites: “Help support Sarah’s mission’s trip” or “Buy John’s family a new van.” Usually there is a link to GoFundMe or some site like that. The right need with the right connections might get thousands of dollars donated. However, now the fundraising need has come down to abortion – an abortion that costs $9,500.

This weekend, pro-choicers in Virginia were partnering with the DC Abortion Fund (DCAF) to help “Erica” pay for her abortion – to the tune of $9,500 total, reminding us in light of the outcry against the recent Texas abortion ban and other national restrictions that abortion is, ironically, alive and well all over the nation.

Apparently Erica had a car accident on her way to her abortion appointment in June, so now the price had gone up another $3,000 to the total of $9,500. There was a social media influx Sunday to raise money to help her.

The DCAF is known for its willingness to help women fund their abortions, even in later-term situations, even giving a preference to funding women coming to the D.C. area for a second-trimester abortion. In this case, a Twitter campaign was unleashed to help Erica obtain her abortion:

In June, we pledged to support Erica. Our skilled team of volunteer case managers made sure she had the money she needed. She was all set to get her procedure – but we can’t always plan for the unthinkable. On the way to her appointment, Erica’s car was hit by another motorist. The car was totaled, and although Erica was lucky to be able to walk away, she had to miss her appointment that day.

Now she has another appointment. But due to the delay – one that couldn’t be helped, due to a car accident and lack of transportation – she faces a price of $9,500.

As Amanda Williams, who tweets under @fullfrontalfem, posted on Sunday, “She has no #choice w/o access.” It seems that abortion access must now include giving money to be sure people can have what is surely not a first-trimester abortion at that price. 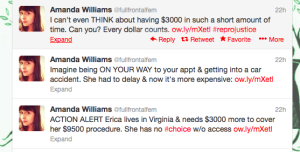 In 2009, the median charge for a surgical abortion at 10 weeks’ gestation was $470; but since most U.S. women obtain abortions at facilities with lower charges, the average amount paid was $451.[31] The median cost for a medication abortion was $490 and women paid an average of $483.

Planned Parenthood reports that a first-trimester abortion can range from $300 to $950. Ten times the top price Planned Parenthood quotes most likely is the result of some form of a later-term abortion, which is still legal in many places in the United States. Regardless of what abortion proponents in Texas would have people think, abortion is readily available in many states up to varying levels of fetal development.

The DCAF and its supporters are lined up to give thousands of dollars to women so that babies can be killed as late in term as need be for the situation. Last year DCAF posted this need for “Malia” to obtain $3,750 more to abort her baby with a fetal abnormality, instead of allowing him or her to be born and seeing if the baby could be treated, or even die of natural causes. Instead, fundraisers went to work to help pay for a procedure that was $14,500. This is what their organization exists to do: fund legal death as long as the baby hasn’t been born yet.

As for Erica, she got her money. In less than 12 hours people gave the money she needed to be able to go through with her $9,500 abortion. 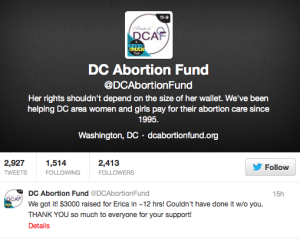 And this, say abortion fund supporters, is the true right for women – access means we allow it, legislate it, and fund it with taxpayer dollars. And when those are not available, donate money to help it happen.