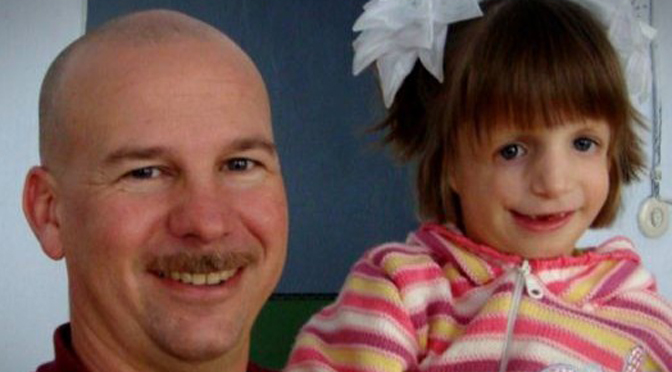 At the age of six and a half, Danica Wetmore had spent her entire life in a Ukrainian orphanage without anyone coming to inquire about her. Danica was born with Treacher-Collins syndrome, in which the bones in the face don’t form correctly resulting in deafness and drooping of the face. If she didn’t find a forever family, Danica would eventually have to leave the orphanage and possibly end up living on the streets.

But when Thom and Tami Wetmore of Texas set their eyes on her, Danica’s life was forever changed.

The couple was moved to adopt Danica because their biological daughter, Juliana, was also born with Treacher-Collins syndrome, but a more severe form. According to WFAA ABC 8, Juliana is missing about 40 percent of the bones in her face.

“You forget that there’s anything different about her after she’s sitting there for five minutes,” Thom Wetmore said of Juliana who has endured 45 facial surgeries. Her body and brain are completely healthy and on track with any other 12-year-old girl. Her favorite things to do are watch movies, play on the computer, and play with her sisters.

“Whatever you first think of somebody when you see them on the outside, that’s not what they are on the inside,” said Thom Wetmore.

Her father says that Juliana sees everyone as equal. She doesn’t see their differences. Of Danica, he says, “She’s quirky. Extremely inquisitive. Very artistic. Loves drawing, painting, expressing herself.”

It’s been six years since the Wetmores brought Danica home. Since then, they’ve adopted three siblings who were in great need of a home and a family.

“It’s just amazing how your daughter that you look at as just a normal, everyday child that looks a little bit different has changed so many lives,” Thom said. “Because you realize it’s OK to be who you are.”

Now Danica and Juliana have someone in their lives  – each other – who understands the challenges they face. Four precious children were adopted into a loving family. And all because one little girl named Juliana inspired her parents to see everyone for who they are on the inside and open their hearts and home to children in need.