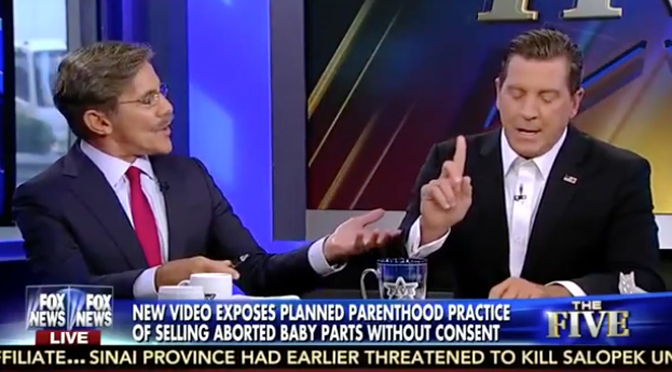 “What is a good abortion to you?”

Those were the words of Fox News contributor Geraldo Rivera this week on “The Five” during a discussion of Planned Parenthood’s fetal body parts trafficking scandal.

Rivera vehemently defended the abortion giant, calling the scandal, exposed by The Center for Medical Progress’s undercover videos “baloney.” Rivera, never at a loss for hysterics or hyperbole, went on to say:

Well, at least he owns his support for abortion. He also apparently owns  his support for dissecting preborn children and harvesting their organs, stating that the cure for cancer could come from the useful body parts of these murdered children:

Don’t you fear, Eric, that the scandal, the justifiable scandal over the callousness of the people portrayed in this video might put an end to the harvesting of what would be garbage, they would throw it away and there may be the cure for cancer in there. Maybe there is the cure for heart disease in that fetal resource.

That is how human life is viewed by Geraldo Rivera – as a mere “resource” by which we might obtain something useful for ourselves or for the rest of society. A human life isn’t just valuable enough on its own, as a whole.

No, if humans can be deliberately killed and chopped up for science’s sake, that’s fine with Rivera, who stated, “[Y]ou can’t destroy the hopes of humanity for the cure of these horrible diseases because of the revulsion” at the near-gleeful disarticulation of preborn children seen in CMP’s videos.

Rivera’s co-hosts fired back, stating that there has quite possibly been criminal conduct from Planned Parenthood employees, and this is a big deal. Greg Gutfeld said he believes the PP scandal “makes the Gosnell ordeal look like Candyland.”

At one point, Gutfeld silenced Rivera with the question, “What if we found that… a fetus nutritionally was fantastic? Do we now have it for breakfast?”

Well, maybe not. Unless, of course, we knew it would cure cancer.

As Gutfeld bluntly summed up, “I hope you live long on the backs of dead fetuses, Geraldo!”