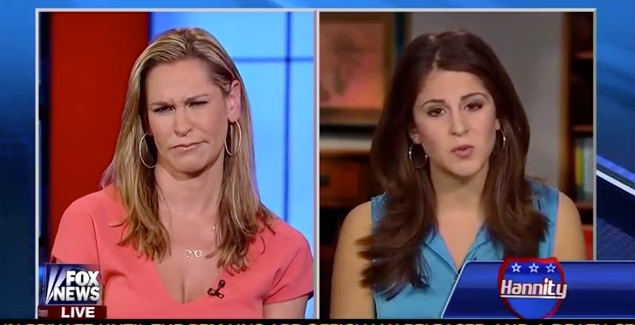 First, I would encourage you to watch the footage from Tuesday’s Hannity Live where Sean Hannity invited Lila Rose and Tamera Holder as guests to discuss Live Action’s latest video releases.  It’s slightly infuriating watching Holder randomly throw baseless accusations at Lila, but try to make it through.

Notice that Tamera Holder did not actually answer the questions she was asked.  But really, what did we expect her to say?  That a baby born alive has rights and it was not okay to kill that baby?  Not killing children is clearly too radical of a viewpoint for her.

In answer to the question of whether or not a baby born alive had a constitutional right to live she sidetracked and jumped to the topic of abortion being allowed up to 24 weeks.  Last time I checked, abortion was killing an unborn child.  She was not asked about abortion.  She was asked about killing a baby born alive.  Her defense of this position—she did not create the abortion law.  Great, the discussion isn’t about abortion law.

“What if the baby was born breathing?”  Holder’s answer was that the exact phrase used in the undercover video was “if it looked like it was breathing,” which in her mind was not the same thing as “it was breathing.”  Therefore, she apparently was not able to answer the direct question of what if a baby was born and it was still breathing.

Holder believed that when the woman and clinic worker in the video were referring to the child as “it” they were not talking about a baby.  Apparently you have to refer to a baby as a “he” or a “she” or as “the baby” in order for Holder to believe you are actually referring to a baby.

Next she attacked Lila for going undercover.  Now we all know that if you walk into an abortion clinic and say that you are pro-life and you want to know what would happen if a baby was born alive that you would get a straight answer, right?  Wrong!

Holder so kindly pointed out that Live Action is not the FBI—apparently citizens are not allowed to make peaceful investigations.  But it sounds like she would approve of Lila joining 60 Minutes.

One of Holder’s favorite accusations was that this was edited footage.  Sure, Fox News edited the footage it showed to fit within the needed time frame, but all the Live Action footage is online for anyone who wants to watch it.  Lila only had to mention this multiple times.

Holder was asked, “When does it become a baby?”  I would have liked to hear her answer on that.  Unfortunately she didn’t answer the question.  However, Hannity asked if after nine months, and she said “no.”

When the topic of Dr. Gosnell was brought up she said that Gosnell found guilty is a “disgusting, disgusting criminal person.”  However, she again lost track that the issue was infanticide.  And she accused those fighting infanticide of being hypocrites and allowing one person to taint everyone.  I’m not sure how she thought there was only one person involved in infanticide since the clinic in New York and DC would follow infanticide just like Dr. Gosnell.

Holder told Lila that if she wanted to take on this issue she should go to law school and fight the law.  As an attorney, I don’t believe that the only people who can effectuate good in this world are other attorneys.  What kind of country would we be if only attorneys had a voice and input into the law?

So when all else fails, Holder resorted to attacking Lila personally by telling her, “You should do better as a woman than go undercover.”   When Hannity asked her why she was attacking Lila personally, she for once answered the question!  Her response was that she believed the investigation was “shoddy.”  I guess that is the only thing you can say when faced with video footage of a clinic worker telling a woman that if her baby was born alive then they would take care of it by killing it in a solution or if the baby was born outside of the clinic then the proper thing to do would be to flush it.

(And if you are interested in learning about Holder’s continued tempter tantrum, you can check out twitchy.com’s report of her tweets with Katie Pavlich on Wednesday.)