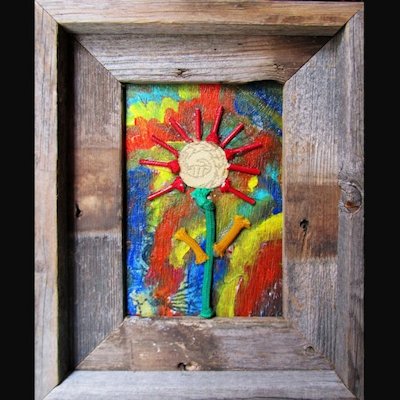 At an art studio in rural Pennsylvania, Patrick Cleary examines a handful of ordinary white shoelaces before he begins a new work. Will he arrange the laces in playful whirls and spirals for the start of a sunset, one of his favorite themes? Maybe he’ll use them to create a variation on the American flag, another subject close to his heart and always undertaken in honor of his late brother Michael Cleary.

To replicate different textures on his paintings, Pat experiments with the laces, removing their plastic tips and fraying the threads to mimic grass, or an angel’s wing or a sky full of fuzzy stars. One of his paintings features a cheery turquoise owl perched on a branch made from extra long laces, meant for a tall man’s sneakers, painted to resemble tree bark. 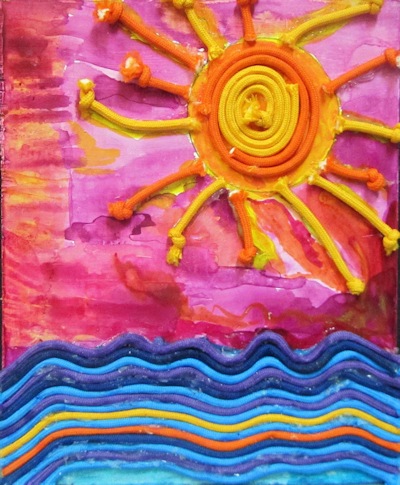 In Balloon Theme, five perfect circles zoom across a background of periwinkle blue and tangerine orange waves.  The effect is reminiscent of sand art, yet Patrick creates his one-of-a-kind work using just shoelaces, which he adheres to canvas board, paints, then finishes with a glaze. 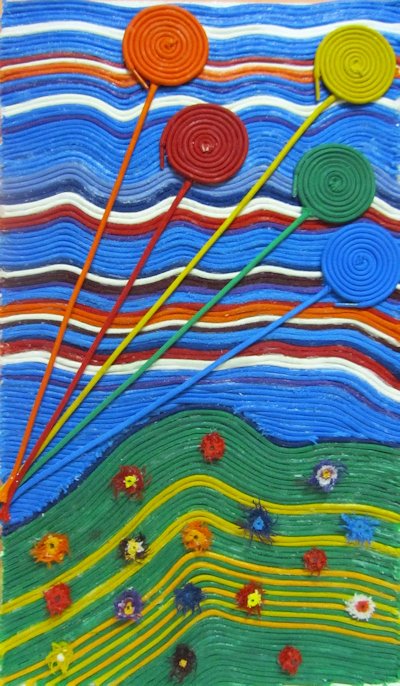 Patrick, 36, who was born with Down Syndrome, is arguably the only artist in the world who uses shoelaces as his preferred medium. He regularly sells his paintings to enthusiastic collectors, and has participated in many exhibits since he began studying art at Verve Virtu studio in Dallas, PA, about six years ago. Pat’s pictures have been juried into Bryn Mawr Rehabilitation Hospital’s annual Art Ability Exhibit, the largest international exhibition in the world for artists with cognitive, physical, hearing, and visual disabilities. Another Cleary original, one of about 400 pieces chosen out of more than two thousand entries, will highlight this year’s show, which opens November 2nd in Malvern, PA.

In a recent interview, Pat discussed the inspirations for his paintings and how he chanced on shoelaces as a way to express his artistic visions. As a child, he began collecting laces, so when a family friend closed her factory, she kindly provided him with a lifetime’s supply.  Encouraged by Gwen Harleman, artistic director of Verve Virtu, which is funded by the Deutsch Institute, Patrick began thinking about laces in a brand new way.

Gwen calls Patrick, who plays piano and guitar and is into photography, a Renaissance man. Other friends refer to the multi-talented young man as “The Mayor,” because of his sociability and charm.  Lately, Pat says, he has been “working his heart out,” at his maintenance job at a local university as the school gears up for the opening of the fall semester.

Pat’s first painting, God Bless the USA, was created in honor of his brother, 1st Lieutenant Michael J. Cleary, who died at 24 in Iraq, December 2005, just days before his scheduled homecoming.  Mike and his fiancé had been planning their wedding, at which Patrick was to serve as best man. 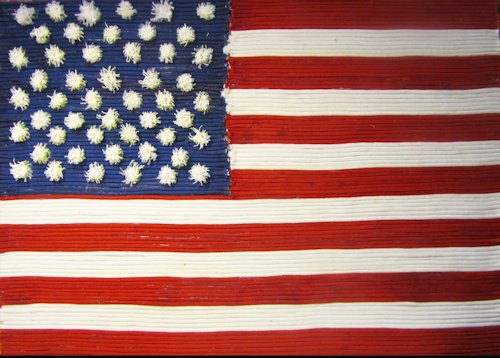 Pat and Mike were the two youngest, the little boys in the Cleary household, with three older sisters. They spent summer afternoons swimming together at the local club and enjoying fishing trips. Pat likes to tell about the time his parents were out, and he accidentally banged his go-kart against a tree. Although he wasn’t injured, he panicked about how to explain his unsupervised go-kart ride to his parents. His younger brother Mike stepped up, as he would so many times in his brief life, and claimed that he himself was the guilty one. “My brother’s always been my angel,” Pat says.

1st Lt. Cleary was the original inspiration behind the Run for the Fallen held in 2008, during which group of civilians ran 4,000 miles across America, each mile completed in memory of a service member killed in Operation Iraqi Freedom. The run led to the award-winning documentary To Them That’s Gone, which chronicles this inspirational event.

The hundreds of tributes left by visitors at Mike’s obituary site by friends, former teachers, and fellow soldiers serve as testament to the quality of his character, his courage, leadership, and selflessness. One soldier who had served alongside Lieutenant Cleary wrote simply, “I will teach my kids about men like you.”

During the interview, Pat, who enjoys keeping in touch with friends via social media, shared a prayer he had posted that morning on his Facebook page. Dear God, he had written, I believe in heaven because I have sunsets and angels, and today. I love Jesus.

He began studying art soon after Michael’s death, and the activity has helped him cope with his grief. “What I do here,” he says, gesturing around the sunny studio crowded with exuberant, bountifully-colored art created by Verve Virtu students, “what is happening here—I just go with it.  I follow.”

At his table in the studio, Patrick’s hand hovers over his supply of laces. What will he create—a blissful skyscape, an ocean sunrise, an angel? Like every artist, he wants to communicate a feeling, an idea, to the world in his images. Whether he decides to make undulating grass or ruler-straight red and white stripes topped by stars, it’s certain that Patrick will transform the humble, useful shoelace into something more than itself.

So much of life is mystery—why are we here, what will happen after we die, have our lives really been divinely planned? Perhaps God, the master artist, likewise selects unpretentious, special souls like Patrick Cleary to break through what looks like limitations, and act as messengers of joy and praise.

Pat Cleary is one example of what persons born with Down Syndrome can accomplish, given love and encouragement. According to some studies, ninety percent of unborn babies diagnosed with the condition are aborted. In July, Pennsylvania Governor Tom Corbett signed into law the “Down Syndrome Prenatal and Postnatal Education Act,” known as “Chloe’s Law.”  This legislation mandates that medical professionals provide up-to-date, evidence-based information about the condition as well as support service referrals to new and expectant parents.

Artwork by Patrick Cleary and other students can be seen at http://vervevertu.blogspot.com/