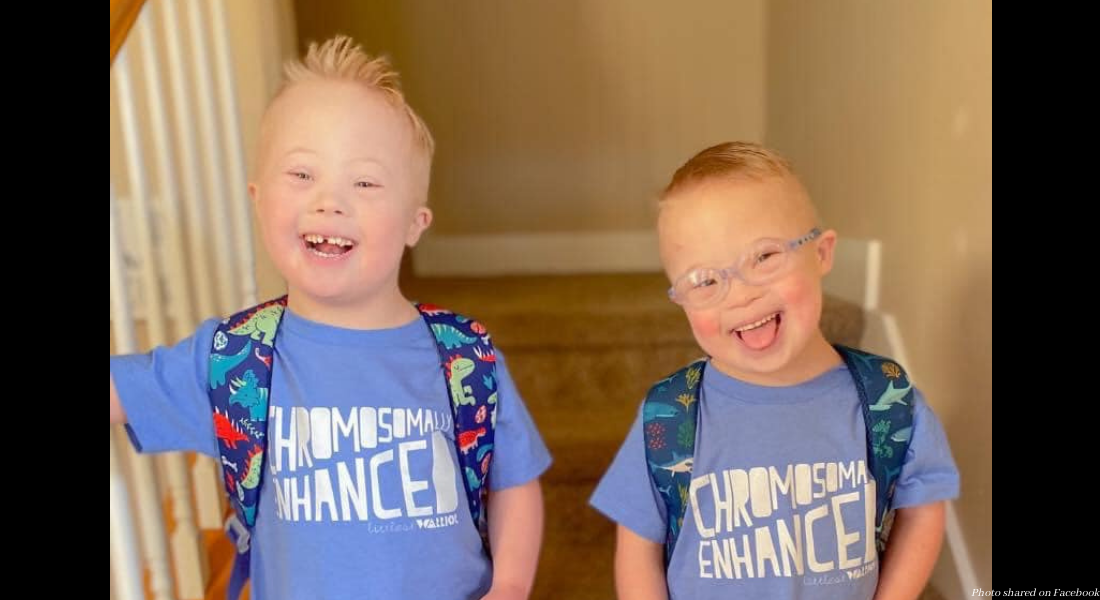 A pair of twins from Nampa, Idaho, are taking the social media world by storm — but they aren’t your typical twins. Charlie and Milo McConnel are five years old, and they both have Down syndrome. With almost 300,000 followers on their social media accounts, they’re already making a big difference, with a little help from their mom, Julia.

Originally, McConnel said her goal was to help give hope to families struggling with a diagnosis of Down syndrome. “[T]hat can be really scary,” she said. “I hope that people will find us, and see that this is what life can be like,” she said. “It can be fun, it’s full of love, it’s not scary. We have no regrets, and there is so much joy in our lives, and I hope that people will see that.”

What makes Charlie and Milo even more interesting is the fact that they’re fraternal twins with Down syndrome, which is more rare than identical twins.

The family was soon noticed by TODAY, and from there, their social media followers skyrocketed. “It has just really blown up into this phenomenon that I didn’t even see coming,” McConnel said in a new interview with KTVB. “They are exceptionally rare, so I think that gets them that initial attention. Once we get you in the door, we really want to educate and raise awareness and advocate for people with Down syndrome and any disability.”

In a recent video, the family took on the “r-word,” or “retard.” It’s a slur which is still commonly used, despite frequent pleas from the disability community for it to leave the social lexicon. Since Charlie and Milo can’t speak yet, McConnel gathered teenagers and adults with Down syndrome to speak about how the r-word makes them feel.

“Charlie and Milo are five and they don’t really understand the power of hurtful words yet, but someone who is an older teen, a young adult, a grown adult, they understand very well what that “R” word means,” she said. “I felt like it was really important to reach out to adults and older teens with Down syndrome and find out what they had to say.”

READ: Two sets of twin boys with Down syndrome show the world it’s nothing to fear

If we are going to truly understand the impact of the R word, we need to talk to those who are most directly affected by it.

The word is hurtful. The word harkens back to a time when people with disabilities were shut up in institutions, mistreated, misunderstood, even exterminated. It maintains that a disability defines worth and if you are have different abilities, you are less than.

It’s time this word is removed from our vocabularies. It’s time to lead with compassion, kindness and acceptance. It’s time to choose a different word, one that doesn’t marginalize an entire community of remarkable humans.

The video has since been viewed thousands of times.

“[O]ver time, it really just became an insult,” McConnel said of the r-word. “It’s hurtful, it’s painful, it hurts our families. I know for a lot of people that word is just a habit, and it was a habit for me when I was younger. It just never occurred to me that it would be hurtful to someone. It never crossed my mind and I think a lot of people are in that same boat. So now, we’re just trying to educate so when people know better they can do better.”

While the video has clearly been having an effect on social media, McConnel said the reason why is simple: because it was people with disabilities speaking honestly about how ableism affects them.

“I felt like the video was so powerful, because of what they had to share,” she said. “That’s what matters. If they say, ‘That word is hurtful, it makes me feel less than, it makes me feel bad, it makes me feel not worthy,’ then we need to listen to that, and respect that,” McConnel said. “The response has been overwhelmingly positive, and I think people are really touched. I think it really gets straight through to your heart.”