Only our core principles will end abortion. Violence doesn’t fit.

“The ends justify the means.”

To many, this pithy statement serves as an infallible guideline for ethics. As long as one achieves noble ends, he may use whatever means necessary to accomplish such ends.

Contrary to what some might think, the vast majority of Americans connected with the pro-life movement are peace-loving, nonviolent, and honorable citizens. They would never raise a weapon or a fist on even the most barbaric practitioners of abortion. 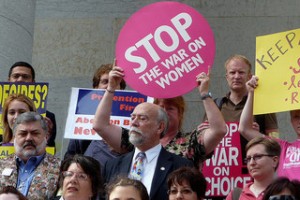 The secular-progressives accuse us of waging a “war on women,” but our warfare is not a warfare of flesh and blood (and it’s not against women). It’s a war of ideas, and even when we bend over backwards to obey the laws of our land and to demonstrate peace, the pro-abortion forces continue to label us as insensitive, intolerant, and even violent.

Even if you’re one of the millions of peaceful Americans connected with the pro-life movement, it’s quite possible that, in the quietness of your soul, you’ve asked the question, “Are we really doing enough for the unborn?”

In the midst of your inquiry, perhaps you’ve even been tempted to think that violence against pro-abortion forces might yield desirable results. Perhaps you’ve reasoned that, because of the worthiness of our cause, we should be willing to exercise any and all means necessary to liberate the unborn. You may have reasoned that the ends justify the means.

If you’ve been tempted to wonder about such things, let me provide some reasons why we cannot fight violence against the unborn with violence against the born. Simply put, violence is never the answer. (While it’s clear that the vast majority of pro-lifers agree with me and would never resort to violence, it’s important for each of us to be able to explain exactly why violence is wrong.)

1. Violence always has the potential of harming innocent bystanders.

Whenever a movement stoops to using bombs and guns to advance a cause, there’s a significant risk that innocent lives unconnected to the horrors will be caught in the crossfire. Abortion is heinous because there is no human being more innocent than an unborn child. Yet a very tiny – and wrong – minority of pro-life activists is willing to risk harming or even killing innocent people in order to protect other innocent people.

Furthermore, when people resort to violence, they risk the most horrendous scenario of all: killing those they are trying to save. If a pro-life advocate bombs an abortion clinic and even if he warns the staff that there’s an explosion coming, how can he be positive that there aren’t any pregnant ladies left on the premises? How can he be positive that he himself is not demonstrating the highest form of hypocrisy in killing an unborn child himself?

If one abortion doctor is shot, the pro-abortion cause is not threatened. There are thousands of other abortion doctors in other places who will continue to perform the same procedure. Even if one Planned Parenthood clinic is bombed, the pro-abortion cause is still not threatened. There are hundreds of other clinics around the country that will continue to provide abortion on demand.

If anything, violence only furthers the pro-abortion cause. Pro-choice forces are emboldened by the hypocrisy of a very minuscule portion of pro-life zealots who choose to advance their cause through violence. When abortion advocates see violence from our movement, they are motivated to stand even stronger for “reproductive rights.”

Basically, not only is violence hypocritical and wrong; it also accomplishes nothing. 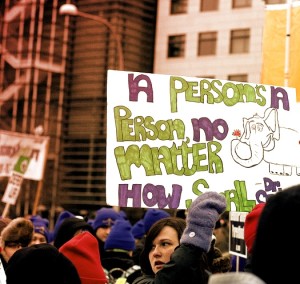 …or how large. Every life is precious and ought to be protected.

There is a reason that we are part of the pro-life movement. We’re not just anti-abortion or anti-reproductive rights; we’re for life, regardless of at what stage of development that life happens to be. When a pro-life advocate commits violence, his actions speak louder than his words. The pro-abortion forces quickly recognize that this pro-life activist does not really stand for life at all, but instead stands for death and bloodshed.

As a pro-lifer, I am committed to the belief that all life is precious, even the life of an abortion doctor. It is true that, in many cases, our justice system orders the execution of those who commit murder, but we are not the executioners. In our abortion-saturated culture, we ought never be the vigilantes, but instead the ambassadors of life and peace.

4. Violence removes all hope of change.

Consider, for instance, Dr. Bernard Nathanson, who claimed that he personally presided over approximately 75,000 abortions. After becoming one of the most influential voices in the pro-abortion movement, he later recognized the error of his ways and became a champion of the cause of life.

We do all that we do because we are confident that politicians, abortion doctors, and pro-choice zealots can be persuaded to change.

So, are we doing enough for the unborn? Most likely not. There is still much work to be done. But violence is never the answer. The work that we must do cannot be achieved through knives, guns, and bombs, but through deep and abiding core principles.

These core principles dictate to us that every single human life is precious and worth protecting – whether that life is the victim of abortion or the practitioner of abortion.