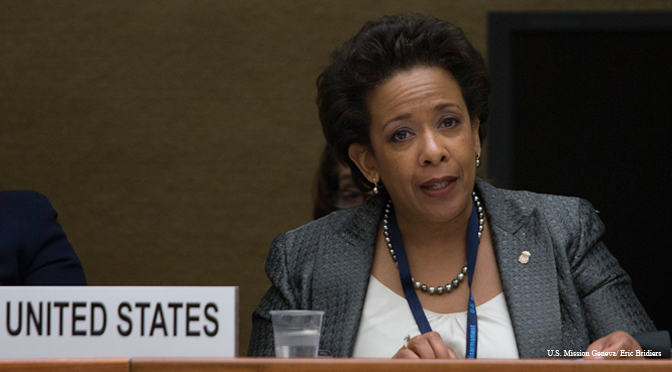 “The obvious political strategy for a Democratic administration is to ignore the vids for as long as possible….”

Four months after it was written, this remark appears to be ringing true. On July 22nd, Attorney General Loretta Lynch had stated that she would look into the Planned Parenthood videos, saying she was “aware of those matters generally from the media, and from some inquiries that have been made to the Department of Justice [DOJ], and again at this point we’re going to review all the information and determine what steps, if any, to take at the appropriate time.”

It’s been four months since Lynch made that statement.

This week, Lynch admitted to the House Oversight and Government Reform Committee this week that she, like other members of the Obama administration, is still apparently getting her information on Planned Parenthood solely from the mainstream media (which basically means it’s from a Planned Parenthood press release).

During a House Oversight and Government Reform Committee hearing, Lynch responded to a question from pro-life Congressman Trent Franks, an Arizona Republican.

“Have you personally reviewed any of the videos released by the Center for Medical Progress? If so, was there anything in their videos that you found disturbing?” Franks asked.

“Congressman, I have not undertaken a review of the videos,” Lynch admitted.

She continued: “I am, of course, aware of the news reports about them. As I indicated, all of the information received by the Department is currently under review so I don’t have any further comment on it at this time.”

Lynch’s statement from July sounds nearly identical to the one four months later: ‘I’m aware of the news reports about the videos… and it’s under review.’ Well, if that’s the extent of her awareness, then she doesn’t know much, considering the media’s lack of accurate coverage.

In July, after the first undercover videos recorded by the Center for Medical Progress were released to the public, 11 Republican senators sent a letter to Attorney General Lynch, asking that the Department of Justice review the video(s) for possible illegal activity. At the same time, Lynch (and California AG Kamala Harris) received letters from a group of Senate Democrats requesting an investigation not into Planned Parenthood, but into the Center for Medical Progress. Some of these same Democrats happen to be on Planned Parenthood’s campaign payroll, but somehow get to be the lucky ones to join the House Energy and Commerce Committee’s Select Investigative Panel on Planned Parenthood – which they have ever-so-impartially dubbed “The Select Committee to Attack Women’s Health.”

Like Planned Parenthood’s friends in Congress and like our President, AG Lynch doesn’t really have much of a compelling personal interest to view the videos. After all, Planned Parenthood thinks she’s fantastic. And as a U.S. attorney, Lynch joined an amicus brief supporting Planned Parenthood against the Partial-Birth Abortion Ban Act, stating the ban was “unconstitutional” and that the phrase “living fetus” was  “hopelessly vague as a legal proscription.” The Supreme Court disagreed.

At least we can hope that Attorney General Lynch, unlike President Obama, will actually view the condemning videos.

The American public will need to keep a close eye on exactly what Lynch and the DOJ do, as the announcement could become a way to divert public attention while sweeping Planned Parenthood’s likely violations under the rug – especially given the recent insistence by the White House that Planned Parenthood is “ethical.”

As the lack of review by Lynch and the DOJ continues to drag on, we can assume that this is exactly what the Obama administration is hoping for – that the public will forget about the videos. It is the job of pro-lifers to make certain that doesn’t happen.