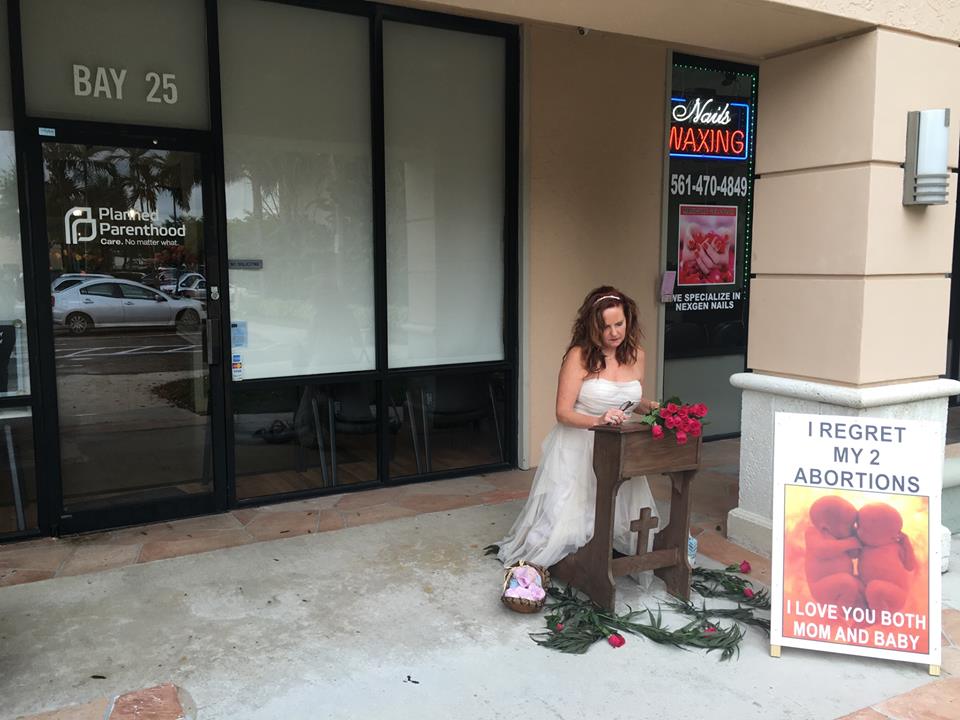 A former volunteer spokesperson for Planned Parenthood knelt and prayed on the sidewalk outside a Florida Planned Parenthood on Good Friday to bring the message of life to the workers and the women going inside. Julie Woodley said that she wanted to start a “love revolution” for the women who have had abortions as well as the workers of abortion facilities.

Julie is a licensed therapist, filmmaker and speaker and has founded a ministry, Restoring the Heart Ministries, that helps people heal from various types of trauma, including post-abortion trauma. Julie did not always understand the negative effects of abortion. In fact, not only did she have two abortions herself while in college, but Julie was also trained by Planned Parenthood as a spokesperson.

We were given the language to convince people to have abortions.I was trained to be a volunteer in the clinic and talk to women who came in. When they saw I was a good speaker, they put me as a speaker for them speaking on college campuses.

But on this Good Friday, Julie was speaking against the abortion business by praying on the sidewalk just outside the Planned Parenthood in Boca Raton. The clinic is nestled in a strip mall, but that did not deter Julie who brought palm branches, roses, and baby booties. She sang “Give Me Jesus” by Fernando Ortega and wore a beautiful white dress, explaining that she wanted to look beautiful for God in order to show these women and workers his love.

After Planned Parenthood discovered Julie on the sidewalk , they ordered her to leave, so she joined other pro-lifers praying on the street. Before she left for the day, Julie placed her roses and baby booties in front of Planned Parenthood’s door for the women would might come. In this video, Julie requests prayer for the women. Julie’ motivation for this beautiful tribute to life came from her own past, where death and depression almost killed her. Following the murder of one of her close friends, Julie broke down emotionally and tried to take her own life. After crying out for help, Julie says she heard the Lord tell her that He loved her.

More than any time in my life, I knew someone loved me. For the next years I pursued God.

I began to see that someone loved me and I could be forgiven for all the abortions and men I had slept with. I could be born again – clean with God. People began to walk me through my healing.

While this was a beautiful beginning, Julie’s abortion healing was years in the making. She had been speaking publicly about the Lord and about freedom from sexual abuse, and yet realized she was still carrying the shame of her abortions. Only after her fourth born child came into the world, did Julie realize that she should actually have had two more children – the two children she aborted years earlier. That is when her grief really came to the forefront.

The shame and regret just hit me, I just knew at that point that I had to heal from these abortion wounds. I had to bring the Love of God into that pain.

After visiting a retreat center, Julie locked herself into a room. While there alone, she read Scripture, prayed, and meditated on how much God loved her until she felt the healing. Besides reaching out to women outside Planned Parenthood, Julie routinely schedules medical visits at Planned Parenthood so she can speak with the staff. She says that she goes when God leads her and has good conversations with the doctors she encounters.

I know it sounds crazy, I feel like God is calling me to the heart of the battle. I can say I used to work for Planned Parenthood, and I can go in a tender, loving way and talk to the abortionist.

[I told the doctor], “This is a huge disconnect because you are doing the ultimate form of abuse; you are killing children.” This is all while I am doing the exam. Susan, the doctor at this center, kept saying to me, “I am listening.”

When speaking with Julie, it is obvious that she has a heart for both the clinic workers as well as the women:

Its not aggression, or bullying that will win this battle. I am not demeaning what others are called to do. I have been on the other side. They [Planned Parenthood] are not the enemy – the devil is just using them.

Julie is currently developing a film project to help others recover from abortion. It is a 10-part video series with accompanying curriculum targeted at counseling professionals and lay people to lead them through the forgiveness journey after an abortion. It is called Into My Arms, and the promo is below:

Women and men who have been affected by abortion are welcome to contact Julie at her website: Restoring the Heart Ministries.