As the threat of defunding Planned Parenthood looms, the abortion giant’s ally (and former research arm), the Guttmacher Institute, is attempting to come to the rescue by penning an article praising Planned Parenthood’s “contraception services,” as if no one else under the sun could offer the same to women.

Planned Parenthood, recently steeped in a scandal of selling the body parts of the babies they abort and facing the possibility of losing half a billion dollars in federal money under the new Congress and President-elect, attempts to justify its taxpayer funding by downplaying its staggering abortion numbers — falsely claiming that it only makes up three percent of its business — and instead plays up its other “services” such as contraception, cancer screenings and “women’s health care.”

But as Live Action has documented:

Planned Parenthood is the single largest abortion chain in America, committing 887 abortions a day and over 320,000 abortions last year alone.

Planned Parenthood is so focused on abortion that it aborts 160 children for every one child it refers out for adoption. If a woman with an unwanted pregnancy goes to Planned Parenthood, that child is 160 times more likely to be poisoned or dismembered than to be put up for adoption to a waiting family.

The article, “Understanding Planned Parenthood’s Critical Role in the Nation’s Family Planning Safety Net,” written by Kinsey Hasstedt, a Senior Policy Manager in the Guttmacher Institute’s Washington, D.C., office, fails to mention the past relationship Guttmacher has had with Planned Parenthood. In addition, it also fails to state that Ms. Hasstedt is a former employee of Planned Parenthood, as documented by her LinkedIn page: 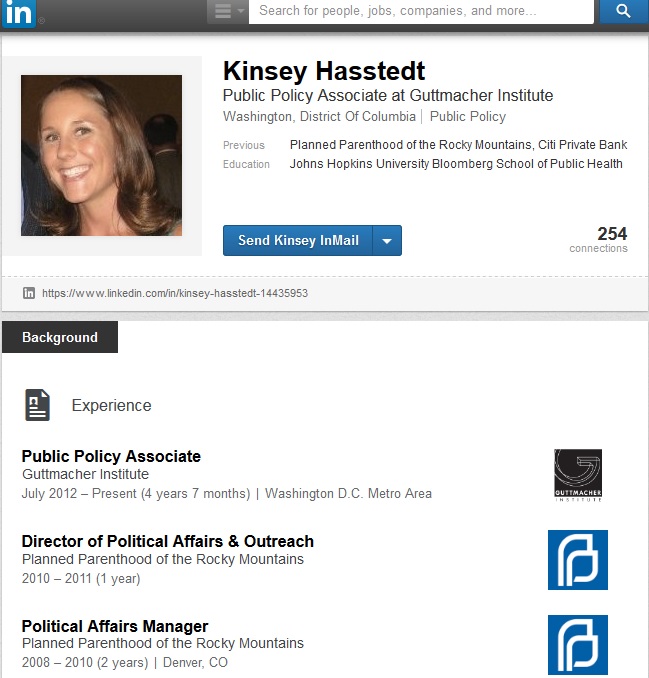 Hasstedt worked for the infamous Planned Parenthood of the Rocky Mountains, holding various positions (as seen above) from 2008 to 2011. Documented here is the sweeping corruption within that organization.

Hasstedt begins her article by claiming, “Attacks on Planned Parenthood seek to undermine a network that has capably served millions of women for decades.” She quotes service and delivery stats dating back to 2010 — failing to include the important information that Planned Parenthood’s patient numbers have drastically diminished since then. Planned Parenthood boasted 3.3 million patients in 1995. This number fell to 3.1 million by 2005, 3 million by 2010, 2.7 million by 2013, and most recently, in 2014, that number fell to 2.5 million. If they are the greatest provider of contraception and women’s health care in the nation, why are they losing so much business? 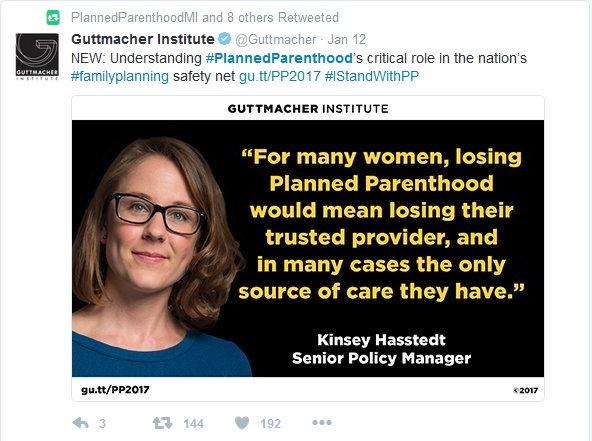 Hasstedt continues with an eye-rolling claim: “It is simply unrealistic to expect other providers to readily step up and restore the gravely diminished capacity of the family planning safety net were Planned Parenthood defunded,” adding, “It is also unclear whether other types of safety-net health centers would be able to consistently provide the same degree of accessible, high-quality contraceptive care offered by Planned Parenthood.”

The argument here is that Federally Qualified Health Centers (FQHCs), which outnumber Planned Parenthood centers 20 to 1 and serve approximately 23 million people annually, are not capable of handling Planned Parenthood’s 2.5 million patient load. This was the same fear that plagued Democrats when they passed the Affordable Care Act, but a study on the effects of the ACA using data from 15,700 patients found that visits to primary care physicians only increased slightly. It was anticipated that uninsured patients suddenly gaining insurance might have unmet medical needs, and their demand for services might overwhelm the capacity of primary care doctors. This idea proved false. Kathy Hempstead, director of the Robert Wood Johnson Foundation which conducted the study, told USA Today that “even though there’s been a big increase in coverage, it’s a relatively small part of the market and the delivery system is able to handle the demand.”

In addition to their cozy relationship on paper, Guttmacher, which is also funded by the taxpayer, has given millions of dollars to Planned Parenthood. Planned Parenthood’s own annual reports show the massive amount:

Reports after 2005 stop listing Guttmacher, but they do list “private contributions” and “other operating revenue” which they do not break down into detail.

Perhaps the biggest smokescreen that Guttmacher and Planned Parenthood supporters like Hasstedt use in making a case against defunding is by censoring Planned Parenthood’s history of violations in various areas. In her piece, Hasstedt ignores the fact that the Senate Judiciary Committee referred several Planned Parenthood affiliates to the FBI and the United States Department of Justice for possible criminal charges in their roles in fetal tissue practices and transfers.

Live Action News recently reported that the House Select Investigative Panel on Infant Lives‘ final report on its year-long investigation into the fetal parts industry found several disturbing issues with Planned Parenthood as well. Live Action News contributor Susan Michelle-Hanson reviewed the 471-page report and noted that it “reads like a manual of what not to do”:

(As an aside, Planned Parenthood’s HIPAA violations have also been documented by Live Action News here.)

A Daily Wire review further documented how, because of Planned Parenthood’s own actions, the Panel had recommended defunding:

The Panel found that Planned Parenthood affiliates and clinics have repeatedly neglected their fiduciary duty requiring good stewardship of federal taxpayer dollars through the following: careless management and failed compliance with Medicaid billing procedures; violating federal laws and regulations pertaining to patient consent and the privacy rights of their patients; changing the method of abortion to increase procurement of fetal tissue for which they received a per tissue payment; and a general disinterest in clinical integrity. The Panel recommends that Planned Parenthood lose all federal funding, including reimbursements for Medicaid services.

When it comes to patient safety at Planned Parenthood, things look just as grim. Pro-lifers have documented 61 ambulance arrivals as well as over 200 hundred incidents cited for failure to comply with medical health and safety standards at just one Planned Parenthood facility in Missouri. The death of 24-year-old Tonya Reaves, who was left to bleed inside Planned Parenthood’s Chicago center (and later died from her legal abortion), has all but been forgotten by Guttmacher and friends.

When the American public is fully informed of all Planned Parenthood’s alleged criminal and fraudulent actions as well as patient abuses, Americans support defunding. The problem is that Hasstedt, Guttmacher, and Planned Parenthood’s friends in the media refuse to report it.