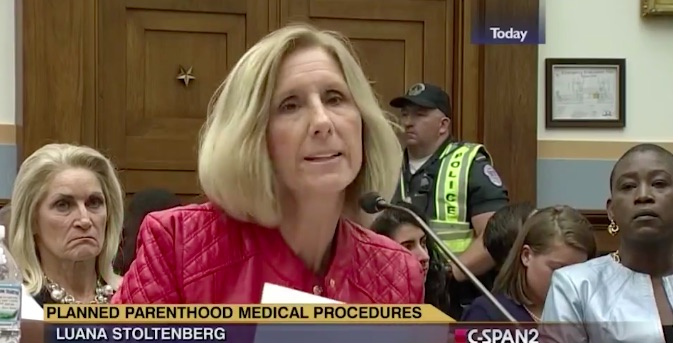 Luana Stoltenberg, a former Planned Parenthood client, testified before the U.S. House Judiciary Committee. Now a vocal pro-life advocate and post-abortive mother, Stoltenberg personally experienced the abortion chain’s lack of real health care that it claims to provide for women. Stoltenberg, along with many other post-abortive women, is speaking out against Planned Parenthood and its complete disregard for human life. She explains how the abortion giant fails to truly consider the needs of mothers seeking real health care and support in difficult or vulnerable life circumstances.

My life has been devastated by abortion. I was a teenager when I had my first abortion. I was too afraid to tell my parents that I was pregnant, and my boyfriend didn’t want a baby, so I made my appointment with Planned Parenthood. I was so scared when I arrived. I paid my money, and I sat in the waiting room.

I was then taken back to a room with a nurse and asked how I felt about this. I told her this had to be wrong; it had to be a baby. She told me it was just a blob of tissue, that this abortion would be easier and safer then if I carried it to term.

I was a scared teenager with no medical knowledge or experience; they were the trusted medical professionals and adults — so I thought. So I trusted and I believed them, and I went through with the procedure.

The type of abortion that I had was a vacuum aspirator method. This is the most common abortion done in the first trimester. I laid on the table, and I waited for the doctor that I had never met before — which is most times the case — to come in. This doctor was cold, and he was unfriendly. He told me to lie still, that it wouldn’t take long. I had no anesthetic for the pain. He said that I would just feel tugging and a slight sensation and cramping. That was not true.

It was the most extremely painful procedure I’ve ever had done.

I could hear the increased labor and every time the suction machine would pull a part or limb of my baby from my body. Each time, I kept trying to sit up to see what was going into that jar. Was it my baby? They kept pushing me back down and telling me to lie still. As soon as the procedure was over, they quickly wheeled the jar out of the room with my baby’s remains. They knew it was my baby; they saw the head, they saw the feet, they saw the arms.

I wasn’t told about fetal development when I was at Planned Parenthood. They didn’t tell me that my unborn baby that they were ripping out of my body would have arms, had legs, had a heartbeat, fingerprints, and she could feel pain. Why didn’t they want to tell me that? Were they afraid that I would change my mind? It must have been a wrong choice if after knowing all the facts, I chose life for my child.

On the way home, I was in severe pain. I laid in the backseat, crying and bleeding profusely. And when I got home, I called Planned Parenthood and I told them about the pain and the bleeding. They told me that this was no longer their problem, that I would need to call my own physician. There was no way I was going to call my own physician.. I was too scared, I was too ashamed, and I didn’t want my parents to find out what I’d done. So I painfully laid there that day and wondered if I would die.

The happy, fun-loving Luana died that day along with my baby.

I became depressed, angry. I started drinking heavily. I started doing drugs and became very promiscuous. I hated myself. My life was spinning out of control. I became pregnant two more times and chose abortion both times.

Each experience was similar to the first, except for the second abortion. They showed me blobs of tissue on slides and told me that that’s all that they would be removing — not a baby. By the third abortion, I was so ashamed and embarrassed, I didn’t even give them my real name; I gave them a friend of mine’s name. I cringe to think what would have happened if there would have been complications, or I would have died on the table that day. Who would they have called? Would my parents have ever found out?

Having an abortion didn’t solve any of my problems. It only created new ones and larger ones. The way I dealt with them was more alcohol, more drugs — anything to numb the pain. I even tried to kill myself.

But God had a plan for my life.

I found hope and forgiveness in Jesus, and I accepted him as my Lord, and my life began to change. I met a wonderful man, and we were married, and we wanted to start a family. But we were having no success.

I went for endless tests, and one of the tests that I had done was a dye test to determine if there [were] blockages in my fallopian tubes. During the test, my doctor asked if I had ever had abortions, and I admitted that I had three. She showed me on the screen where my tubes were damaged and mangled from the abortion procedure. She said I would never have children because of the abortion, and she wanted me to have a hysterectomy so that I would not have an ectopic pregnancy. She left the room, and I laid there paralyzed and let it soak in that the only children I would ever bear, I had killed.

I had to tell my husband that he was never going to be able to have his own children because of the choices I had made. I wondered if he would want a divorce. We had a hard road of tears and sleepless nights and counseling sessions. I learned to forgive myself and the abortion workers for not telling me the risks and the possibilities of infertility.

I was angry that I was lied to and that I didn’t get all the facts so that I could make the choice for myself.

I thought they were pro-choice and cared for women. I didn’t feel cared for; I felt used, and I felt abused. I live with the consequences and the pain and the regret of abortion every day, along with many other women.

In front of me are pages of sworn testimonies of women who have been hurt and abused physically, emotionally, psychologically by Planned Parenthood and other abortion industry in general. I’m here representing them as well as myself. It is a heavy load. I’m asking you to consider these stories and mine when you make legislation, and when you make decisions about defunding Planned Parenthood, and about abortion.

All of us who have been hurt by abortion are being made to pay Planned Parenthood with our tax dollars. You know, that’s like being forced to pay your abuser over and over again. Abortion is not health care, it is the taking of an innocent life. Thank you.

Editor’s Note: If you are a former abortion client or if you know a woman (or man) who is struggling after an abortion, help is available. Resources and support groups can be found here.