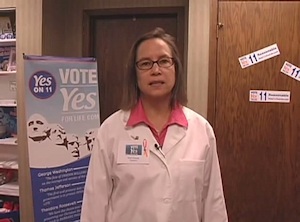 Dr. Patti Giebink, a board-certified OB/GYN and former abortionist, appeared in a commercial promoting initiative 11, a measure that would have banned abortion in South Dakota. The commercial was produced by pro-life activists who supported the initiative. Giebink, who was the main abortionist at a Planned Parenthood clinic, was helping campaign for the ban on abortion. You can see the video here:

When the video opens, Dr. Giebink is standing in a building that once housed an abortion clinic. In her own words:

“In this building, this used to be a private abortion clinic, for many years, and when that doctor wanted to retire he then sold the building to Planned Parenthood, which then hired me to work for them doing abortions….”

She then describes what happened when a woman entered the abortion facility.

Here we see, once again, that while Planned Parenthood does ultrasounds before abortions as a matter of policy, women are not offered the chance to see their babies on the screen. This is not surprising, considering the power of ultrasound images to change hearts and minds.

Giebink goes on to describe the abortion procedure:

“So I would meet the woman in the exam room and I would have a short period of time to talk about the procedure, ask if she had any questions, and usually one of the things that I always knew I had to explain was that when I turned on the suction machine, it was so loud that we couldn’t carry on a conversation. I would dilate the cervix according to the number of weeks, and I would choose the cannula that I was going to use. And I would attach the cannula to the hose going to the suction machine, and I would slide that into the dilated cervix, and then I turned the machine on, and then I would go around, suctioning out the uterus. And then I would take what’s called a sharp curette, which looks a little bit like a spoon, and then slide that into the cervix and just make sure the tissue was all removed, and then I’d make one more pass with the suction machine. And generally that was a very quick procedure.”

Dr. Giebink then walks over to a fetal model of a three-month-old child in the womb and says:

“By the time we get to three months, you can see the baby is well-developed. [Pointing to the fetal model, which clearly shows a fully formed unborn baby] You can see the size of the head and you [can] imagine how this head could not go through a plastic straw. And the further along, the more weeks of the pregnancy, the larger the cannula would be, up to a certain point.”

She then explains why aborting a child at this age is dangerous to a woman’s fertility:

“And when we talk about the risk of abortion, and how following abortion the woman is at risk for preterm delivery, and you can see that for this head to fit through a cannula, that the cervix has to be dilated to the point where you could fit a cannula through it.… The largest cannula we would have here was, I believe, a size 12.”

“And so you could also see that the hands and the feet are going to come through okay. But sometimes the head, which was also known as the calavarium, would not come out through the suction cannula, and I would have to use a forcep or a tool to grasp the head; to pull it out.”

She then describes the grisly procedure of verifying that all the pieces of the baby have been removed:

“And so you see the necessity of actually lining up the body parts, and making sure that there’s two hands, two feet, the head, the torso, because if I’m missing body parts, then I have to go back and repeat the procedure. And that didn’t happen very often; it was a very rare instance when I had to go back to retrieve more body parts.”

Then she explained how the baby parts were disposed of:

“People would ask me, how did we dispose of the babies – the body parts, the tissue? And so I would usually [goes to the sink] rinse everything under the water and end up with just parts. And then there would be a big container under here [gestures to a container in the cabinet under the sink] that had a medical waste bag, and all the tissue would go into this container with the medical waste bag. Nothing but liquid went down the sink.”

The babies were further dehumanized by being treated as medical waste.
After the broken body of the child was discarded in the biohazard container, the abortion procedure was over.

Dr. Giebink then gives the reasons that she now opposes abortion.

“We’ve learned that abortion hurts women. That women are more likely to have a preterm delivery after having an abortion. They’re more likely to have depression and suicide. There are serious risks of having elective abortions. Some women never get over it. Women develop problems…
And I think in a woman’s heart, she knows that that is unique human being. That’s not just a piece of tissue. And I was guilty of adding to that concept, because that’s what I explained – I said, “it’s just a piece of tissue.” I could not allow myself to think of that as a unique human being, as a life, because obviously, the next train of thought was “I’m killing a life.”

…. I was the main abortion provider during those years. And it’s my desire to end abortion on demand in South Dakota.”

Unfortunately, despite Dr. Giebink’s moving testimony and the efforts of pro-lifers in South Dakota, initiative 11 failed to pass.  Abortion is still legal in South Dakota, but with more and more abortion providers converting and telling their stories, perhaps one day abortion will be banned.