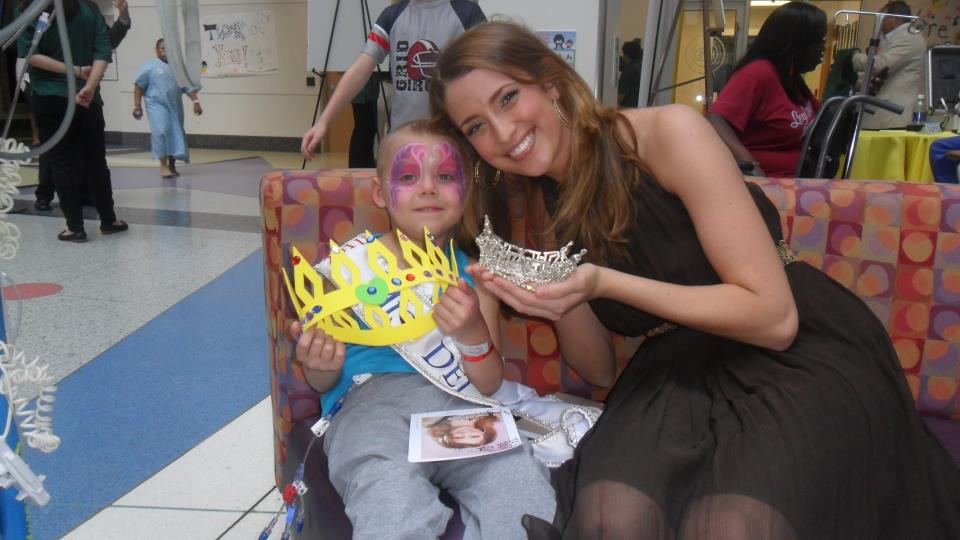 The author during her time as Miss Delaware

“Miss Tennessee just answered a question on Planned Parenthood, and you’re not going to like it.” Those were the first words that greeted my ears upon walking into the room where my 19-year-old sister was watching the 95th annual Miss America pageant last Sunday.

My family is not a “pageant family” by any means. If I had to be totally honestly, every single one of them, women included, would choose to participate in just about anything else. However, almost 5 years ago, I won Miss Delaware and found myself competing in the same Miss America pageant.

As a “Miss State,” we are taught to answer questions certain ways. Ever heard of political correctness? If the rest of the girls competing do not walk away with the crown of Miss America, we should at least be given a “Miss Political Correctness” runner-up trophy. The moment a girl decides she wants to compete in pageants is the moment where her opinions are altered, shaped, and molded to fit what others want to hear. Anyone that says otherwise is lying to you.

My Catholic, conservative opinions were perfectly fine as long as I said them in a way that was not too Catholic or too conservative. Yes, I believe prudence should absolutely play a factor in everything said and done, but spending (literal) hours working on making sure your opinions are acceptable to the general public? I don’t think so.

….Especially when the general public is under the impression that Planned Parenthood is moral, ethical, and good for women…

Interview preparation for Miss America is crucial. One of the highest scored phases of competition is the private interview, which takes place prior to the live show. In the months leading up to the pageant, each and every contestant is given “mock interviews” – Miss America style interviews with faux judges who ask hot button topics and questions reminiscent to those they would receive come Judgement Day (or in this case, September 13th). I can say with absolute certainty that every contestant was prepared to answer the question that Miss Tennessee received.

Sunday night, after making the top 7, Miss Tennessee was asked if funding should be cut off for Planned Parenthood.

This was her response:

I know judges are taught not to score on the opinion of the contestant itself, but rather the delivery and confidence with which it was spoken. I am not sure, however, what judges would do if a contestant confidently and eloquently tried to tell them that the sky was green, when it is, in fact, not green and is never going to be green.

On September 13th, Miss Tennessee tried to convince America that the sky was green as she made her way confidently and eloquently through an answer about Planned Parenthood that was blatantly false.

“it goes for mammograms…”

Cool, since when? Never? Planned Parenthood does NOT do mammograms. Out of the 8,000+ facilities in the United States doing mammograms, ZERO of them are operated by PP. Nada. Big, fat, goose egg. If you do not believe me, just do a little research with the U.S. Food and Drug Administration. They keep a list of every licensed mammogram facility in the country.

You know it’s bad when the liberal Washington Post gives a three out of four Pinocchio rating for the White House’s mammogram lies. Awkward.

“…if we don’t give that funding to Planned Parenthood, those women will be out of health care for reproductive causes.”

I wonder what the staff at the over 9,000 community health centers nationwide have to say about this. These centers provide all the services to women that Planned Parenthood claims to offer (other than abortion, but PP rarely claims that publicly). If we paid any attention to the Senate’s recent bill to defund Planned Parenthood, we would know that the monies (almost half a billion tax dollars, by the way. Yes, you read that correctly. Half a billion.) would have been redirected to these locations.

So, no, Miss Tennesee. Just no.

The aftermath was truly a remarkable thing to witness. Miss Tennessee received praise from outlets like Cosmopolitan Magazine (they called her answer “flawless?” Cosmo?! No way!!) to the entire Twittersphere. My personal favorite was an article headline from Refinery29.com which stated “A Pageant Queen Got Asked About Planned Parenthood and Nailed It.”

Maybe the author was hoping I would not read the entire article to the bottom where it was admitted that she was actually incorrect; PP actually does not do mammograms.

“The sky is so beautiful this time of year! In Delaware, the weather is just perfect. And the sky is green.”

Spoken like a true PP spokeswomen, Miss America contestant Hannah Robison fell into the web of lies that Planned Parenthood has been spewing for years. She became yet another woman who thinks that non-existent mammograms outweigh the illegal, inhumane, and frankly barbaric slaughter and selling of our children. She became one more woman who completely ignored the real healthcare offered to women by thousands of other non-PP facilities.

What we witnessed the night of the 95th Miss America pageant was a sure symbol of the rapid decline of our young people. Babies are being born alive and with their hearts still beating, they are harvested for their organs. Our young women, competing to be the face of our nation, are being taught to sugarcoat and present an opinion on this topic in a way that will not ruffle too many feathers.

The real face of this nation is not found in a woman wearing a tiara, but rather in the thousands of innocent lives lost every single day under the guise of “women’s health.” This is nothing short of a travesty.

How about we stop teaching our young women and men to be politically correct? Let’s just teach them to be correct.

Editor’s Note: Live Action uncovered the truth about Planned Parenthood and its failure to provide a single mammogram for American women in its Mammosham Project.