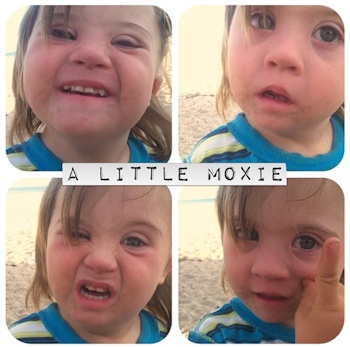 Via A Little Moxie Instragram.

Meriah Nichols, the mother of a three-year-old girl who has Down syndrome and blogger at A Little Moxie, has written an op-ed explaining what her fast-paced life with her daughter, Moxie, is like. Meriah shares how her heart bursts when, from the background, she watches her daughter sign her way through books, or utilize her art supplies, or play on the beach:

…she knows her own mind so well, she is clear about what she wants and the path she desires. Her “yes”’s and “no”s are firm.

Meriah, who is deaf, knows what life with a disability is like. However, she challenges the perception that a mental or physical disability is a disadvantage:

Moxie has Down syndrome. She has an extra chromosome, she has an intellectual disability.

There are so many cards that are stacked against her, I don’t even know where to begin. The biggest one though, the most glaring one to me is this idea that we have as a culture that there is something wrong with her, that she’s broken or something.

“People with disabilities are broken”

There is this idea that she needs to be moulded into some kind of mainstream form. That she needs to do as all do, that instead of looking to her to see what she offer and trying to move with her flow, we staunch her flow and divert her stream.

Meriah hits on something deeper than the idea that individuals with disabilities should be accepted; she suggests, rather, that the core integrity of who they are as individuals be approached with an eye to learning from them, seeing what they can teach us, rather than molding them into something more like ourselves.

Meriah has learned lessons about life and love from her daughter that a person without Down syndrome couldn’t have taught her in the same way. She stresses the importance of cultivating the unique individual that is her daughter. She vehemently opposes the idea that the ideal for Moxie would be to grow into a “normal” person, rather than into the unique individual with Down syndrome that she is (emphasis added):

If we don’t let them be who they are, if we don’t encourage every aspect of who they are to flourish so that flowers that we never even knew existed would have the wherewithal to emerge, sprout and bloom.

And that’s part of the key here to me — ‘flowers that we never even knew existed‘ — because we know very little about Down syndrome in particular and intellectual disabilities in general. We have been so busy for so long in not listening.

While Meriah says that Moxie causes her to approach every day with a faster pace, she knows that her awe for her daughter wouldn’t be any less if Moxie were slower, because the privilege is in traveling through life at Moxie’s pace, whatever that pace may be.

If Moxie was not quick, if she was not so sure of herself, there would be something else.