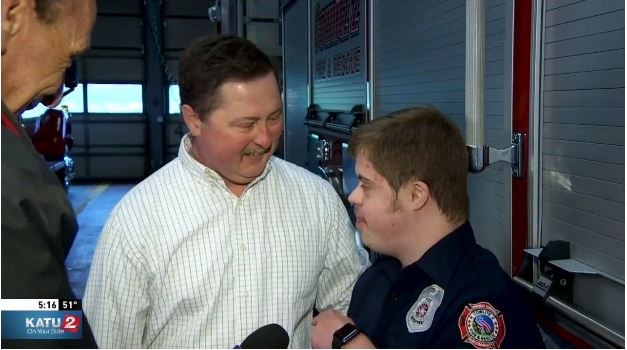 Heroes come in all shapes and sizes and Ryan LaFave is no exception. The 22-year-old is a graduate of Cowlitz 2’s fire science program and is a volunteer with Cowlitz 2 Fire & Rescue in Kelso, Washington, where his father David is chief. LaFave also happens to have Down syndrome. Last summer, he was at home when two neighbor children came running to his door.

The children were distressed. Their house was on fire and two other siblings were still at home. Keeping his composure, LaFave dialed 911 and went to the house with the children, who also have special needs. Thankfully, outside of the home were the two other children. LaFave kept them calm and ensured they didn’t try to re-enter the house to retrieve any items or pets while they waited for the fire trucks to arrive.

Lieutenant Jason Sanders was the acting duty chief that day and said that if LaFave hadn’t been there and hadn’t responded properly, the children could have been injured.

“Had he not been present, the situation certainly could have been different,” he told The Daily News.

READ: Video of model’s surprise party for sister with Down syndrome goes viral

LaFave learned how to stay cool under pressure in high school when he participated in Cowlitz’s Fire and Science program. After graduation, he continued to volunteer with the fire department.

“There was a lot of chaos, a lot of pets, a lot of children, a working fire, and Ryan was a calming force, that’s what the duty chief told me,” said Ryan’s father.