As the Department of Justice has launched its investigation into Planned Parenthood and its fetal tissue practices, in southern California, two companies have settled with the Orange County district attorney’s office regarding their illegal sale of aborted baby body parts. The sister companies were implicated in the undercover Planned Parenthood videos exposed by The Center for Medical Progress (CMP). 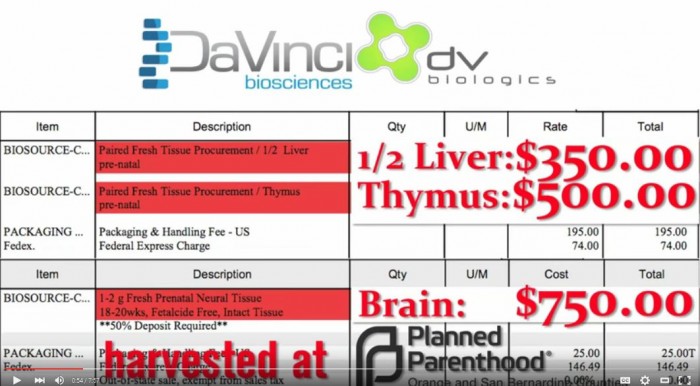 The Los Angeles Times reports that DV Biologics LLC and sister company DaVinci Biosciences LLC agreed to a settlement for $7.785-million after they were caught selling fetal body parts, which is illegal under federal law. The companies also agreed to cease their work in California in the next 60-120 days. According to the Times:

The agreement also requires the companies to admit liability for violations of state and federal laws prohibiting the sale or purchase of fetal tissue for research purposes, prosecutors said.

“This settlement seized all profits from DV Biologics and DaVinci Biosciences, which they acquired by viewing body parts as a commodity and illegally selling fetal tissues for valuable consideration. These companies will never be able to operate again in Orange County or the state of California,” Dist. Atty. Tony Rackauckas said in a statement.

Prosecutors said the companies in 2009 hired marketing consultants and launched an advertising campaign with “summer sales” and promotional discounts. Items were advertised in a catalog with prices ranging from $40 for a vial of “total RNA” cells from several fetal tissue sources to $1,100 for a vial of specific cells.

By 2015, the companies had generated more than $1.5 million from at least 500 sales to research facilities, selling products for more than what it actually cost to process, handle and ship the tissue, prosecutors said.

Employees were also paid a commission on profits they earned from the packing and handling charges, prosecutors said.

In 2016, CMP exposed Da Vinci Biosciences and DV Biologics as working in tandem with Planned Parenthood of Orange County in order to harvest and illegally profit from the sale of fetal organs and tissue. CMP reported:

“They take the whole specimen,” Russo explains about Da Vinci. Russo asks the undercover buyer, “You’re looking ideally for an intact specimen?” “As intact as possible,” the buyer replies.

The “intact specimen” is an entire body of an aborted baby — or as close to the entire body as is possible after the abortion procedure.

These settlements in Orange County and the closure of these companies light more fire under the trail of the DOJ and its ongoing investigation. Fetal tissue companies must first acquire the babies’ tissue and organs before selling them, and Planned Parenthood’s role in harvesting the baby body parts cannot be overlooked. Although California charged CMP’s David Daleiden and Sandra Merritt with crimes, the facts of real crimes being committed by the fetal tissue industry CMP was investigating continue to come out.

Russo also divulges that her Planned Parenthood affiliate is not using digoxin, the chemical used as feticide in later 2nd-trimester abortions to kill the fetus and prevent a live birth, due to a nationwide supply shortage. Without a feticidal procedure like digoxin, it is possible for a fetus extracted intact during an abortion to be born alive.

Asked a second time about producing intact fetuses in late 2nd-trimester cases for organ harvesting, Russo admits, “It happens sometimes, but it’s pretty rare.” She continues with a smile, “But, we try.”

Now the DOJ wil be the one looking at the invoices and the part Planned Parenthood plays as it investigates America’s number one abortion corporation.