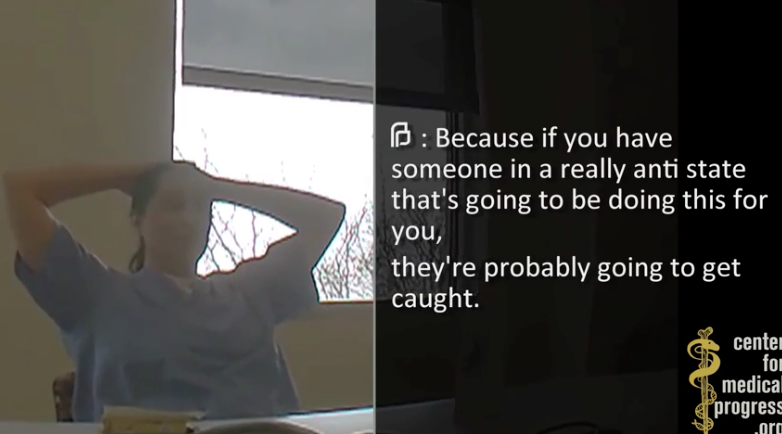 Even if Planned Parenthood’s executives hadn’t been caught trying to “sell baby parts” (and they were), there would still be plenty of things to go after.

But these facts are ignored by people like left-wing ‘skeptic’ blogger Rebecca Watson (pictured below), who released a video last week called, “Planned Parenthood is not selling baby parts, you f***ing idiots.”

She sounds a little upset. Screen-capture of Rebecca Watson (via skepchick.org).

What has her angry is the series of videos from the Center for Medical Progress. Filmed undercover, they document conversations between senior Planned Parenthood figures and people they thought were with a company purchasing fetal tissue.

Time and again, the PP officials spoke of how they could supply human remains in exchange for cash. Nevertheless, Watson insists Planned Parenthood is innocent, claiming aborted fetuses are nothing more than “garbage” anyway….

It’s weird for those of us with two braincells to rub together, that this is even a thing. Because first of all, obviously Planned Parenthood doesn’t sell BABY PARTS. J***** f***ing Ch****, get a hold of yourselves. Baby parts!

She also attacks Live Action, compares investigating Planned Parenthood with conducting a witch hunt, and likens the abortion chain to victims of anti-Semitism. She also seems to think fetal tissue is crucial for life-saving research, apparently unaware that adult stem cells can now be used for this purpose, or that there are actually practical advantages to doing so.

What Watson doesn’t do, however, is demonstrate that Planned Parenthood isn’t trying to get money for human flesh.

Granted, it’s tough to argue that when there’s footage of an executive complaining about “lowball” prices and saying how much she wants a Lamborghini. But, just for argument’s sake, let’s pretend Planned Parenthood officials weren’t caught haggling over the value of dead children. What about their other crimes?

The first video features Dr. Deborah Nucatola, Planned Parenthood’s senior director of medical services. At three minutes and forty three seconds, Nucatola describes the technique she uses to abort a child while still saving his or her organs.

Dr. Nucatola might think what she does is “very good,” but federal law says otherwise: 42 U.S.C. §289g-1 prohibits “alteration of the timing, method, or procedures used to terminate the pregnancy… solely for the purposes of obtaining the tissue,” which is exactly what Dr. Nucatola claims to do. She’s not alone.

The second video shows a meeting with the president of Planned Parenthood’s medical director’s council, Dr. Mary Gatter. Gatter makes clear that she wants a good price for fetal organs, and she’ll break the law in order to collect them.

The doctor is clearly aware that what’s she’s describing is wrong. That won’t stop her from doing it, though.

The fourth video focuses on Dr. Savita Ginde, vice president and medical director for Planned Parenthood of the Rocky Mountains. It’s hard to say what the most disturbing scene is. You might think it’s at at nine minutes and three seconds, when Ginde declares, “it’s a baby,” before asking how much she can get for his severed body parts. Or maybe it’s at eleven minutes and eight second; that’s when one of Ginde’s assistants laughingly notes that the victim is “another boy” while his corpse is being poked over.

However, what’s not in dispute is that Ginde will commit crimes to harvest tissue. Four minutes and four seconds into the video, Ginde says that not only will she alter how abortions are performed, but she’ll instruct others to as well.

And the corruption continues. At four minutes and ten seconds into the first video, Nucatola describes performing what sounds like a partial-birth abortion. They’ve been outlawed since 2003, yet Nucatola doesn’t seem to care. “The Federal (Partial-Birth) Abortion Ban is a law,” she explains, “and laws are up to interpretation.”

Further, Dr. Ginde talks about doing D&E’s. “D&E” stands for dilation and evacuation, a technique that involves dismembering the child one piece at a time.

But it doesn’t always go according to plan. There’s a chance the baby can come out early, and according to Ginde, this does occasionally happen. While she doesn’t say how she handles the situation, we do know what Planned Parenthood spokesperson Alisa LaPolt Snow said in 2013 when asked what should be done with a baby who survives an abortion: “That decision should be between the patient and the healthcare provider.”

Keep in mind that this is just the latest of Planned Parenthood’s scandals. Others have included covering up sexual abuse, offering to help human traffickers, and engaging in billing billing fraud.

That’s why you should sign the petition at WhiteHouse.gov demanding a criminal prosecution. You can also contact Colorado’s Attorney General, Cynthia Coffman, and ask her to investigate whether infanticide is happening at Planned Parenthood of the Rocky Mountains. Finally, don’t forget to sign Live Action’s petition telling Congress to end Planned Parenthood’s half billion dollar subsidy.

Of course, none of this will make Rebecca Watson happy, but we’ve got other things to worry about.

So does Planned Parenthood.