Every year in Rochester, NY, an organization called Metro Justice holds a Peace Parade on Memorial Day . The organization claims to fight for “economic, social, and racial justice,” but their efforts have been compromised in the past where the pre-born are involved. The pro-life organization Feminists for Nonviolent Choices (FFNVC) became a victim of Metro Justice’s dichotomous view of peace when they were excluded from the organization’s peace parade earlier this week. After attending planning meetings where the organization was told by Metro Justice that they would be allowed to participate as long as their message focused on peace, FFNVC received a letter six days later uninviting them from participating in the parade due to their stance against abortion, even though they consistently oppose all violence (including war, euthanasia, etc.). 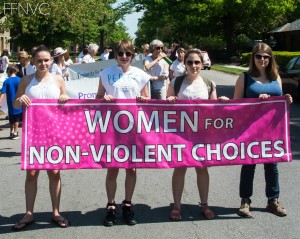 The news came as a blow to the organization, whose founding member, Carol Crossed, had helped to found the Peace Parade in 1984 as a member of the Women’s International League for Peace and Freedom. Crossed also marched in the original peace parade, making FFNVC’s rejection from the parade thirty years later even more troubling.

After their rejection from the event, FFNVC turned to the Ghandi Institute, a local organization that works to promote “harmony in the community” and whose executive director has mediated dialogue between pro- and anti-life factions in the community in the past. However, despite the Gandhi Institute’s offer of a mediator, Metro Justice refused to dialogue before the parade event. FFNVC was left with no alternative but to apply for their own parade permit with the city one week prior to the event. FFNVC members felt that it was important for their own message of nonviolence to be heard in spite of the discrimination they faced.

FFNVC banners read, “Feminists for Nonviolent Choices: A consistent voice for all human life,” and many participants from other area pro-life organization wore white and displayed symbols of peace, trying to connect for observers the relationship between peace and life.

Kelly Vincent Brunacini, the Executive Director of FFNVC, gave Live Action News an exclusive interview after the parade. She said,

FFNVC was disappointed and hurt by the exclusion from Rochester’s Peace Parade by Metro Justice. Rather than focus on the common ground of our pro-peace/anti-war positions, they instead chose to focus on the differences in our abortion position. This unfortunate decision created division where there should have been unity and ultimately hindered the process of peace at a very basic level.

Despite hostility from a few Metro Justice people — Brunacini cheerfully refers to the obscene gesture they received from one woman as a “half peace sign.” — Brunacini said that the pro-life parade received overwhelming support from observers.

The experience ultimately left Brunacini saddened. “How are ‘peace’ people going to bring about peace if power and control and domination are used in achieving it ?,” she asked. “That is not the way of nonviolence.”