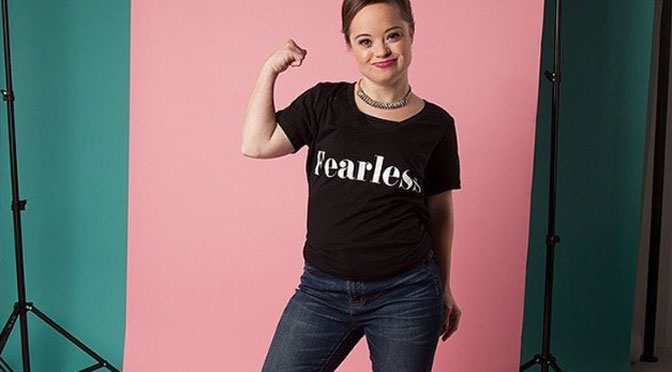 With hundreds of abortion supporters rallying outside the Indiana State Capital to target and promote aborting babies with Down Syndrome, Katie Meade’s national beauty campaign couldn’t be any more timely or “Fearless.”

A new Indiana law, signed March 24th by Indiana Governor Mike Pence, is the second in the nation (North Dakota being the first) to ban abortions because of a genetic disability such as Down syndrome. The law also bans abortions based on discrimination targeting like the unborn baby’s race or sex.

While this new law has abortion supports in an uproar and their rallies and signs are nauseating the public, People Magazine, Fox News and the Huffington Post (among countless other news sites) are brilliantly bringing  Katie Meade’s message to the nation.

Katie Meade is the first person with Down syndrome to become the face of a beauty product campaign and she is doing it with a fearless spirit. Katie explained in an interview with Fox News’ Diana Falzone, “I want them to know that people with disabilities or without disabilities, they can shine – like I do.”

After going through two open heart surgeries in her young life, Katie Meade won gold for the balance beam at the 1999 Special Olympics in Raleigh, North Carolina. Katie went on to kick off the 2003 World Games in Ireland by introducing Bono and U2.  In her work as ambassador with Best Buddies International, a nonprofit 501(c)(3) organization dedicated to establishing a global volunteer movement that creates opportunities for one-to-one mentoring, integrated employment and leadership development for people with intellectual and developmental disabilities (IDD), she met and talked with Tom Brady.

It’s through Best Buddies International that Meade was introduced to Kenny Kahn, CEO of Beauty & Pin Ups hair care, who works closely with this non profit organization. Beauty & Pin Ups officially launched only four months ago and they give a percentage of all proceeds of their hair products to Best Buddies International. When they were branding individual hair products for their new line, they asked themselves, “Who is the most fearless person we know?” They all immediately thought of Katie Meade. It was then that she would be offered a beauty campaign and platform that would change our culture’s perspective on beauty and on disabilities.

Anthony Shriver, founder and Chairman of Best Buddies International spoke at the February Beauty & Pin Ups runway debut (along with pro-lifer, Kathy Ireland), saying that the brand “is socially conscious and responsible” and they desire “to invest back into the community.”

This “Fearless” beauty campaign is only the beginning for Katie Meade’s stand for people with disabilities. She is looking to inspire and to be a mouthpiece for those who have been pushed to the side, overlooked, or underestimated in their full abilities. Her own mother, Becky Meade, passionately told interviewers, “I think it’s inspirational to people/parents of children with disabilities of any sort… that there is so much out there! There is so much possibility!”

When asked what landing this beauty campaign means to her, Katie exuded the passion of her mother, saying with a sparkle in her eye, “It’s pretty awesome because I can show everybody that I can inspire other people with intellectual developmental disabilities.”

Katie ends each interview with this resounding statement that leaves us all encouraged and hopeful for all children targeted and discriminated against for the way they were created: “Beauty belongs to everybody, it belongs to everyone!”