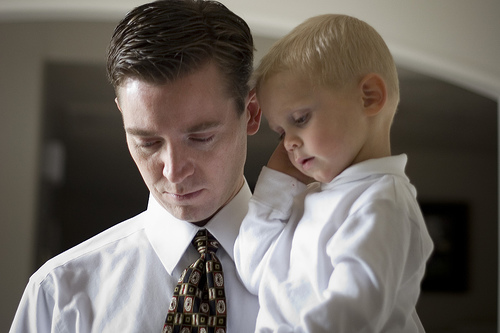 In the national struggle over abortion rights, fatherhood has become an additional casualty. On the one hand, women cry for men to be fathers, to pay child support, to marry them, to share equally in the raising of children. But on the other hand, women call for the right to make their own decisions, to have the “freedom of choice,” to have an abortion with no roadblocks.

As a woman, I do not understand how we can demand that men be fathers and yet prevent them from being exactly what we ask. Of course, if a child is born, her father should share in the raising of that child. I completely agree with this. A father who is not married to his child’s mother should either spend equal time caring for the child or pay child support. Of course.

Women need to take responsibility. We cannot speak out of both sides of our mouths. We cannot demand that men be fathers only when we want them to, and then kick them to the curb when we want to abort their children. This is so unfair that “unfair” is not an adequate word to describe it. There are no words to describe the plight of a man who is forced to sit down and shut up while his child is murdered.

Since I’m a woman, why don’t you take the word of men? Plenty of fathers have spoken out about their struggle to save their children or their utter helplessness to do anything about the situation.

I can only imagine that path that Bill will travel now; asking for an answer to “Why did she do it?” when there is no answer. How does he deal with his wife’s actions, coupled with her regret, while processing his own grief and loss?

How does he deal with the fact that his wife’s family was counseling her to get the abortion against her husband’s wishes? How does he someday tell his beautiful daughter that she was going to have a little brother or sister, but her mommy decided to get an abortion and by law, he couldn’t stop her?

This father was forced by his wife to choose between saving one of their unborn triplets or saving none:

I was presented with a Coventry-esque decision: save one, or save none.  I chose the former, though I tried on several occasions to convince her to at least keep twins.  I failed.

He goes on to describe his deep-seated feelings of pain concerning the abortion. Forced to be silent to save one of his children, he wonders what he could have done differently and hopes for forgiveness:

Each retreated, pushing away, as the needle entered the amniotic sac.  They did not inject into the placenta, but directly into each child’s torso.  Each one crumpled as the needle pierced the body.  I saw the heart stop in the first, and mine almost did, too.  The other’s heart fought, but ten minutes later they looked again, and it too had ceased….

On USlegal.com, you will find a heartbreaking question from a father: “How can I stop my girlfriend from having an abortion if I am willing to take care of the child?”

The reply?  The cold, hard facts:

Legally, your consent isn’t required.  Perhaps you can persuade her by having an attorney draw up papers agreeing that you will have all financial and other responsibility.

Actually, for fathers, that’s a very good idea. In this messed up system, I still believe that a father should try everything within his power to save his child and convince the mother not to have an abortion. I discussed this more in my earlier article.

However, sometimes the things my fellow women do make me ashamed and incredibly sad. How dare we demand that men be fathers when we strip fatherhood from them at our will? Women, this must end. Our children need fathers. And men who want to love and care for their children should be allowed to do so.