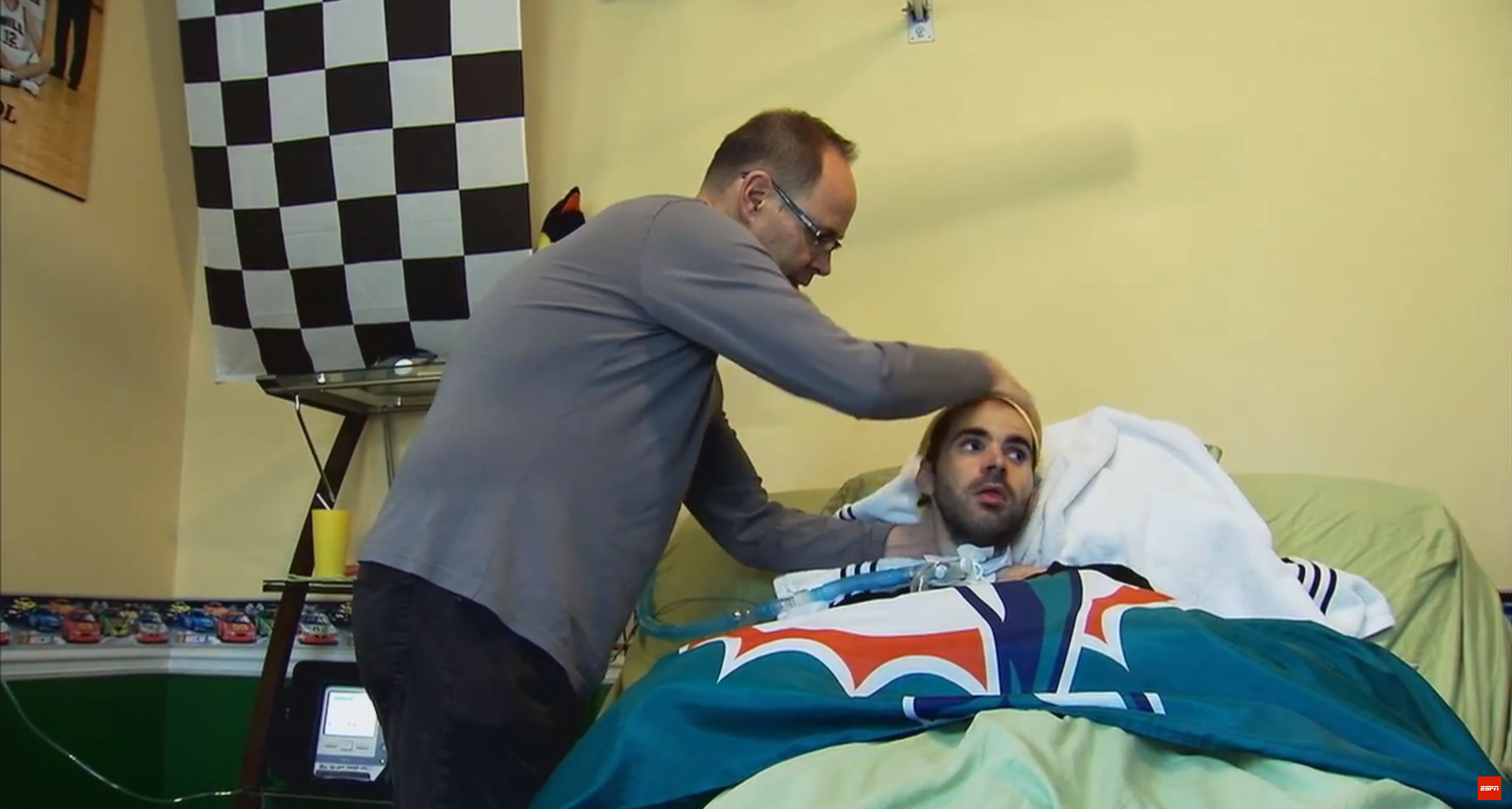 “There’s nothing better a dad can do than bless his son. Nothing.” -Ernie Johnson, Jr.

Most know  Ernie Johnson, Jr. son of Major League Baseball player and Braves announcer, Ernie Johnson, Sr. as one of the top sports host on Inside the NBA. Sharing the stage with men like Charles Barkley and Shaquille O’Neal, Johnson seems at home. But what goes on in his real home is what makes him a star.

ESPN’s E:60 – Ernie Johnson: My story tells of the Johnson family that the public never sees. From his battle with cancer to his poignant family history, the real Ernie Johnson is a hero to many–especially his wife and children.

Ernie and his wife Cheryl have have six children, four of whom are adopted. Two were adopted internationally, Michael from Romania, and Carmen from Paraguay. It is Michael who becomes the real focus of this powerful biography of Ernie and his family.

Ernie tells of feeling like he had everything: two beautiful children, a wife he loved, and a great TV gig. And then in 1990, the ABC show 20/20 rocked the Johnson’s world when the story of the 14,000 babies in Romania who were left as orphans and wards of the state, needed homes. As they watched the show, Cheryl said to Ernie, “We need to get one of these kids out of an orphanage in Romania.”

Cheryl went to Romania, thinking they would adopt a baby girl with no disabilities, when Michael stole her heart. He was almost three, unable to speak–and had never been outside. Cheryl says in the show:

“He was everything we said we could not accept, but I wonder how I’m going to live my life and wonder what happens to him.”

She called Ernie who said, “bring him home.”

Even though they said he would never talk, walk or bond with people, none of which proved true, Ernie says none of that matters:

“Look. There’s value in everybody. You don’t all have to play by the same rules and have the same capabilities.”

Two years later they adopted Carmen from Paraguay. Ernie says, “We suddenly had a little miniature UN going on here,” he says, adding that their lifestyle “changed dramatically.”

Their life further changed when Ernie was diagnosed with Non-Hodgkins Lymphoma. Ernie faced cancer with the same fortitude he faced the rest of life, never missing a night of work through his chemotherapy.  “Anytime that fear and anxiety and worry came knocking at my door,” he would say “you’re trying to barge in, but you have to hang out with faith and hope and trust–and they’re not going to let you hang around here long.”

He conquered cancer, then Michael’s condition took a turn for the worse. It was 2011, four weeks after he lost his father, when he relays the call from his wife that Michael was at the hospital, unresponsive. Michael had previously been diagnosed with a genetic muscular dystrophy, that destroys the body muscles, said to be “ultimately fatal.” He was expected to live only to his late teens.

That day in 2011, he had to be put on a ventilator. The story’s announcer notes, “Michael never came off the ventilator; instead, the ventilator came home with him.” And so the Johnsons took their son home and cared for him. He’s 26 and requires a ventilator 24 hours a day; he is unable to cough because of his lack of muscle strength, ESPN notes, so they have to mechanically suction his lungs. He has to be showered and have help going to the bathroom. But to Ernie, Michael is a treasure.

“I’m his dad. I’m his buddy. We just like to do stuff together,” Ernie says.

The scence cuts to March of last year and the day of the car show that Cheryl says Michael lives for each year. It’s “Christmas, Disneyland all rolled into one.”

As the camera shows the father and son admiring a Toyota at the car show, Ernie’s comments play over the scene, reminding everyone of what the value of life really is, and how his son exemplifies it:

“He is perfectly and wonderfully made. Sometimes our expectations get so high, and our desires get so high for the next this or the next that. You give Michael a car magazine or laminate a picture for him and it’s like he hit the lottery. He’s whole. He’s got it figured out.”

The Johnson family has it figured out, too.